Motorcycle racing is one of the most fast paced and dangerous sports in the world. For those looking for an exhilarating two wheeled thrill without the risk of becoming roadkill, these games are a decent alternative. We included only one game per series, from the classic motorcycle games to the more recent and realistic ones we curated a collection of bike racing titles that are complex, have intriguing gameplay, offer in depth details, and can be played with friends. The games that emulate real life physics best are kept in high regard. 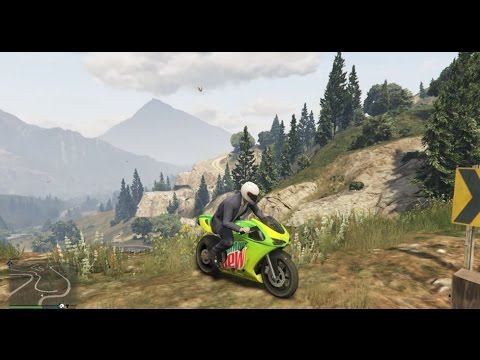 Road Rash gets its name from the severe burnt skin one gets when making contact with the asphalt. This motorcycle racing title is all about violence and illegal street races. A race has 14 opponents and the player can do all kind of moves to win: run over pedestrians, hit his opponents with a chain, deliberately crash and all other kinds of crazy gimmicks. Road Rash was first released on Sega Genesis in 1991 but was later ported to other devices. Even though it doesn’t have the greatest graphics or the most complex gameplay, this game is certainly a title that brings back memories from the times when video game violence was a rare thing to encounter.

The controls of Ride are very grounded in reality, the player being able to access the two breaks individually, to lean forwards and backwards and precisely manage his speed. The game includes numerous models of motorcycles launched until mid-2014 but there are also some historical models from the 80’s and 90’s. The player starts the game using light weight motorcycles and as he advances and wins trophies he can buy more advanced models and even customize them. Besides the main campaign, the game features Quick Races and Elite trophies options. The circuits in the game are represented by 15 real-life tracks such as Road America, Portero and Imola. The main positive aspect of Ride is the accessibility it offers new players, making it a good game to teach you the intricacies of motorcycle racing.

8. Moto Racer DS
Moto Racer DS is an arcade style motorcycle racing game that was released in 2010 and is the most recent title in the Moto Racer franchise. The majority of the gameplay revolves around the “Moto GP” mode where the player competes with the AI. The terrain where the races take place is often bumpy and hard to traverse but in other modes such as Traffic or Supercross the races take place in busy city streets. There’s also the choice to perform tricks with your motorcycle in the Freestyle mode and every well executed flip gets you more points. Moto Racer DS got great reviews and it is classified as a simulation racing game rather than a mere casual one. This is appropriate, seeing how the learning curve is pretty difficult, making the gameplay pretty complex.

7. MotoGP2
Another title based on real life contests, MotoGP2 is about the Grand Prix that took place in 2002. The player can choose to ride as the majority of the contestants from that year and can participate in a single race with three circuits: Suzuka, Phakisa and Jerez. There is also the possibility to race in a full season that will eventually unlock other circuits. For those who like to add a bit more action to their racing, MotoGP2 includes a stunt mode where the player has to complete a lap race doing all kinds of tricks such as burnouts, wheelies or powerslides. When it was released MotoGP2 was met with mostly positive reviews making it a title worth playing if you are into the motorcycle racing video games genre.

6. Motorbike
A game that is not hard to learn, but that definitely requires some time and concentration to master properly. Motorbike is a casual motorcycle racing game that can be played online against other opponents. It features 100 original tracks and the possibility to even create your own and share them with the community. There are also thousands of online tracks to choose from so when it comes to replayability, this game offers it in spades. You have the liberty to choose your riders, your bikes and the tracks where the competitions take place. Motorbike is a game pumped with action that also doesn’t leave aside the real-life physics, making it as realistic as possible.

5. Joe Danger
In this side-scrolling platformer, the player controls the motorbike daredevil “Joe Danger” and helps him defeat his enemy Team Nasty. The game revolves around stunts and time-limited courses that spread over ten challenge rounds. The goal of each level is to collect as many stars as possible with the option of retrying the levels in order to get the maximum number of stars. You will even have a sand box feature where you can customize your own tracks, placing new obstacles and arranging them to your liking to make the race more entertaining. Joe Danger was praised for its fun gameplay, its overall accessibility being regarded as a strong point. Its colorful and happy design was yet another quality the game critics appreciated.

4. Tourist Trophy: The Real Riding Simulator
Tourist Trophy is largely created on the original engine of Gran Turismo 4 and it features three gameplay modes: Arcade, TT and Semi-Pro. The Arcade mode has four riding form presets the player can choose from: Lean body, Neutral, Lean bike and Motard. In the TT mode the player can perform motorcycle stunts and the driving becomes more realistic if the Professional difficulty is chosen. The Semi-Pro mode is an exclusive feature for the North American release of the game. Tourist Trophy was met with good reviews and excitement from the fans of the Grand Turismo series due to its real-life simulation features.

3. GP500
GP500 was released in 1999 as a representation of the 1998 Grand Prix motorcycle racing season. Even now, after 17 years, it is still popular in some regions of the world such as the UK, Australia, Italy and Spain. The game even included 24 of the riders from the 1998 Grand Prix like the world champions Mick Doohan and Max Biaggi. An online store from where enthusiasts can upload and download bike models is available making GP500 a relevant title even nowadays. In addition to this, new mods were developed to keep the gameplay up to date with the latest motorcycle innovations. When it first came out GP500 was considered a challenging and hard game making it go-to for the true fans of the genre.

2. SBK-X: Superbike World Championship
SBK-X: Superbike World Championship is a complex motorcycle racing game that includes three choices of gameplay: Arcade, Simulation and Multiplayer. The Superstock and Supersport championships are a new addition to the SBK-X series and can be experienced in this title. The Arcade mode is a more simplistic one that doesn’t require pro skills to play it. On the other hand the Simulation mode manages to cater to the hardcore gamers who want to feel the real rush of driving a motorcycle. The fact that it offers the opportunity to enjoy a racing game both to the newcomers and to the experienced players makes SBK-X an all-inclusive title that is worth playing.

1. Trials Evolution
Trials Evolution is a bike racing game that received critical acclaim when it was released. The player has to drive a physics-based motorcycle as he tries to avoid the many obstacles the game throws at him, as the point of the game is to have as little faults as possible in order to score the most points. This game can be played by four players simultaneously and it starts with 50 single player tracks. Every time the player progresses in the game he will earn money that can be used to customize and enhance the motorcycles. Trials Evolution includes an Editor where the players can create their own maps in a user friendly and fun way. The best thing about this game is that it can be enjoyed with friends and that it is challenging enough that you will always be wanting more.

Please watch the video for the rest of the selection.