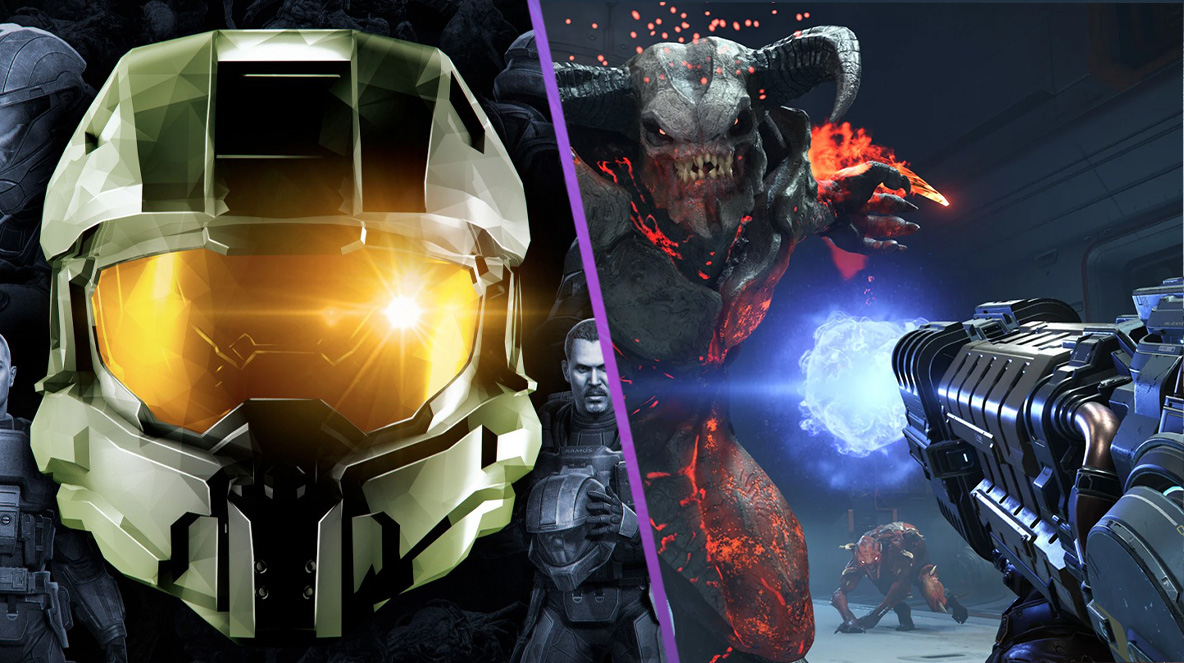 There’s no doubt about it – games are expensive, and they’re only getting more so. With Sony and other games publishers adamant that $70 is the right price tag for first party titles moving forward, it’s only natural for we gamers to try and save a bit of cash where we can.

Luckily, Xbox Game Pass is about to help pick up the slack. With a massive library spreading across the Xbox platforms and PC, there’s likely more than a few games on the service that will tickle your fancy.

Here is a handy guide to some of the best shooters available to play via Xbox Game Pass.

Microsoft purchasing gaming giant Bethesda last year took everyone by surprise. What ambitious new projects will see come out of Microsoft’s seemingly endless money pit? Does this mean the next Elder Scrolls will be Xbox exclusive? Only time can answer these questions.

What we do know about the acquisition is that Microsoft hasn’t delayed in putting much of Bethesda’s catalogue straight onto Game Pass. DOOM Eternal released just a year ago, yet it’s already available to play via Xbox Game Pass. As a sequel to 2016’s reboot of the classic DOOM franchise, it takes everything that Id Software succeeded with then and turns it all up to 11.

The excruciatingly fast-paced combat is some of the best you’ll see in a modern shooter. Eternal tasks the player with thinking on their feet – you won’t get far by sticking to one weapon and ducking behind cover.

Instead, you’ll need to constantly be on the move. Ammo and resources become a constant thought process. Not because they’re scarce, but because you’ll be burning through so much of them. Eternal forces you to attain glory, flamethrower, and chainsaw kills to replenish all of your resources which makes even inventory management a joy.

Moving through incredible locales ravaged by demon-spawn, Eternal is an excellent romp of a shooter from start to finish. If you haven’t touched it already, get it downloaded on Game Pass.

Be warned before you get your hopes up, this one is only available on Xbox Game Pass for PC (at the time of writing). Sorry Xbox console users!

Another Bethesda title, Prey was a brand new venture for developer Arkane when it was released. It’s an example of what Arkane does best – unrivalled world building and simulation.

Without giving too much away, the game takes place on Talos 1, a space station in orbit of Earth tasked with researching an alien species called the Typhon. You play as Morgan Yu, a scientist who happens to be aboard the station when the Typhon break out of the labs and overrun the station.

To say much more would spoil the element of surprise as much of Prey is about experimentation and self-discovery. How you uncover the events of the story is entirely down to your approach to the gameplay. With a wide variety of upgrades and creative gadgets, you’ll find your time on Talos 1 one of constant bewilderment and occasional terror.

While certainly a change of pace from the likes of DOOM Eternal, Prey is certainly worth your time. If, like many, you were disappointed to hear that Deathloop’s release is now delayed until September, this could be the Arkane fix you didn’t know you needed.

I’ll be honest, I’ve never been one to jump into the Gears franchise. The early instalments always seemed to take themselves far too seriously, and it didn’t help that the colour palette on the Xbox 360 consisted entirely of grey and brown.

That all seems to have changed with the most recent installment, Gears 5. The lead characters now appear to have actual personalities beyond the gruff grunts previously on display. Modern graphics have elevated the world into one that’s vibrant with colour and lush to explore.

With Gears 5, there’s a bit of something for everyone. The campaign follows protagonist Kait as she ventures to uncover her family’s past history. Her journey will introduce you to a charismatic squad, who will together face off against a seemingly endless horde of enemies, the Locust.

Of course, there’re narrative threads that continue from the earlier games. The events of Gears 5 set mere months after the ending of 4. Even so, it’s possible to get by without having played the previous games (though those are also on Xbox Game Pass if you’d rather start there!).

If multiplayer is more your bag, Gears 5 has that covered too. It’s rare these days to see a competitive third-person shooter, but Gears doesn’t let that stop it from being one of the most fun out there. It still has a popular player base, so you shouldn’t have too much trouble finding a lobby.

If you’re lucky enough to own an Xbox Series X console, Gears 5 will handle like a treat. As an optimized game, you’ll be able to enjoy stunning 4K visuals at up to 120hz. Even if you played Gears 5 when it released on Xbox One, those upgrades alone could be enough to entice you to return.

You can’t talk about Xbox Game Pass shooters without bringing up the Halo franchise. Halo has been here since the beginning of Microsoft’s journey into the world of video game consoles, and the world is a better place for it.

All six of the mainline Halo games (before Guardians) are included in the handy, modernized package known as The Master Chief Collection, and there are several ways to play. You could start from the very beginning as the Chief tries to stop the Covenant from activating the deadly Halo ring. Or, you could play chronologically from Reach, where we’re introduced to the Noble Team and the wider universe of Halo.

If you’d rather prefer multiplayer, that’s all here too. Complete with all of the maps from each of the multiplayer offerings over the years, you’ll not be short of content to play. If that does become the case, you can just create your own! Forge mode returns and lets you get creative with even more maps and additional items that weren’t in the original games.

All of it has been brought up to modern standards with the fantastic PC port and optimisations for the Xbox Series X. Like Gears 5, the collection can run at up to 4K and 120hz with lightning fast load speeds on the new SSDs.

It’s a nostalgic oldie, but there’s never a bad time to jump back into a bit of Halo. With seven games to get through, maybe now is a good time to start the catch-up before Infinite (hopefully) releases later this year?

It’s a shame that Sunset Overdrive gets so often overlooked. It arrived in 2014, shortly after the release of the next generation consoles, the Xbox One and PS4. Despite reviewing well with an 81% on Metacritic, Overdrive is seldom mentioned when we look back on the great exclusives of the last generation.

Sunset Overdrive takes place in Sunset City which has been overrun by Mutants after a drinks company released a hit new energy drink. From there, it’s your job to chase down a way to cure the city, while fending for yourself with a variety of wacky weapons.

The game was developed by Insomniac Games, who you might remember from heavy-hitters like Marvel’s Spider-Man, Ratchet and Clank, and Spyro the Dragon. The pedigree behind the team is clear to see when you load up Overdrive. The world is riddled with the absurd comedy that Insomniac is the best at, with smart one-liners constantly popping out of everyone’s mouths.

What sets Overdrive apart is its best-in-class movement system. A series of rails run through the city like rats. The player is able to grind on these without issue, building up speed and momentum as you hop from one to another. It provides an infinite number of pathways to traverse between objectives and is incredibly fun to pull off.

Especially if you’re looking for a bit of a collectathon to calm your brain a little, Sunset Overdrive should be high on your list of shooters to play on Xbox Game Pass. It’s easily the closest you’ll get to playing a Spider-Man game on Xbox.

Will you be giving any of these shooters a try on Xbox Game Pass? Let us know across our social channels.