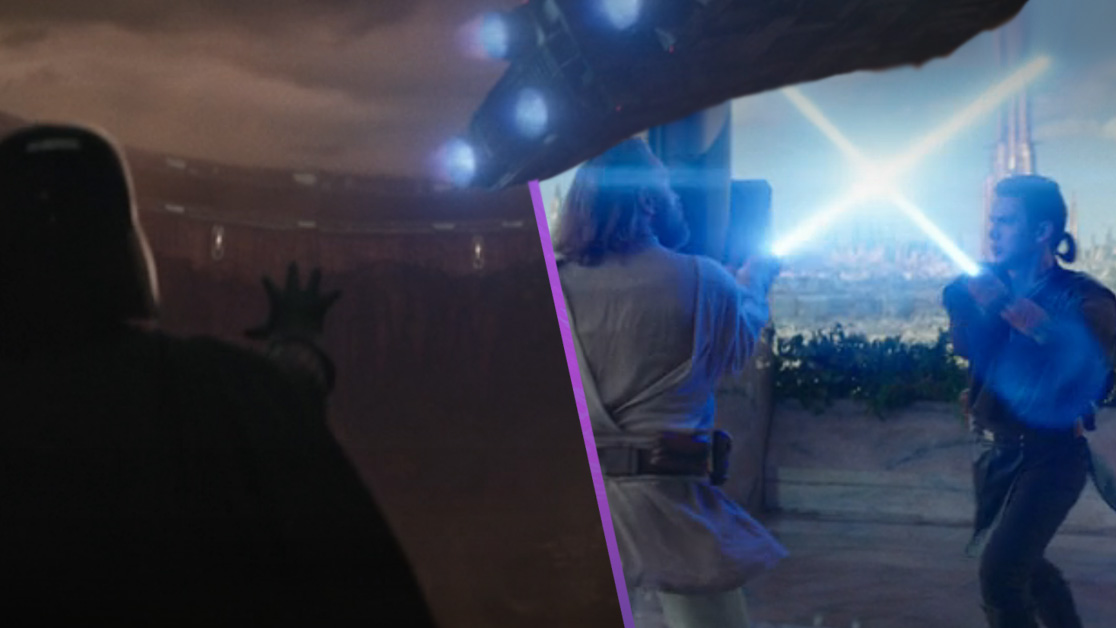 Obi-Wan Kenobi Episode 5 Easter Eggs were strong in the force this week. It’s insane how many fan service and legends references we got, from obscure Jedi references to flashbacks to the prequels.

Let’s not waste any time, here’s what fans may have missed:

Was Anakin Skywalker And Obi-Wan Kenobi Duel Pre Attack Of The Clones?


Episode 5 of the Kenobi limited series was the first to introduce consistent flashbacks, with episode one showing flashes of the Jedi Temple massacre during Order 66.

Used as a plot device, Anakin and Obi-Wan partake in an intense lightsaber practice session on a balcony in the Jedi Temple on Coruscant. During the duel, we see plenty of red flags from Anakin focusing on his aggressive Form V (Shien/Djem) and Obi-Wan using Form III (Soresu) which is a defensive lightsaber technique.

ADVERT
Who Wrote In Aurebesh On Jabimm Base Wall?


Much like episode four, we can see rebel scribblings on the cave wall of the Jabimm base. Here’s who appeared:

– Jedi Djinn Atlis: Head of the Altisian Jedi who didn’t follow the order but continued to serve the republic in legends continuity.

– Jedi Padawan Drake Lo’gaan: First appearing from the Clone Wars webcomic ‘Reversal of Fortune’, he also survived order 66 and has duelled with the likes of General Grievous and Darth Vader.

– Jedi Corwin Shelvay: First appearing in Star Wars: The Roleplaying Game, Galaxy Guide 9 states he’s a playable character who was trained after the purge by Jedi Master Darrin Arkanian. He also worked alongside Kyle Katarn and joined Lukes’s New Jedi Order after the fall of the Empire in legend continuity.

– Roganda Ismaren: Escaping order 66 as a Jedi, she later became a concubine of Emperor Palpatine before training in the dark side of the force as an Emperor’s Hand in legend continuity.

What Ship Is Darth Vader Using?


This is his personal Star Destroyer, the Devastator as seen in The Empire Strikes Back. It featured as Vader promotes Reva, the Third Sister, to Grand Inquisitor. It brings back some amazing fan service, with Vader looking into the hyperspace lane whilst his staff are grinding away in the pit.

Seriously, who polishes these floors?

What Time And Date Is Kenobi Released?

Do The Battle Scenes Feel Familiar?


They should, it mirrors the battle of Crait. Much like Obi-Wan, Luke Skywalker holds off the enemy’s advance whilst everyone in the base carries out a successful escape attempt. Both scenarios are equally tense with some of that trademark Star Wars mirroring thrown in for good measure.


That’s right. Vader pulling the rebel starcraft out of the sky is a clear nod to The Force Unleashed series. Its protagonist ‘Starkiller’ was incredibly powerful in the dark side of the force and able to move Star Destroyers with his abilities.