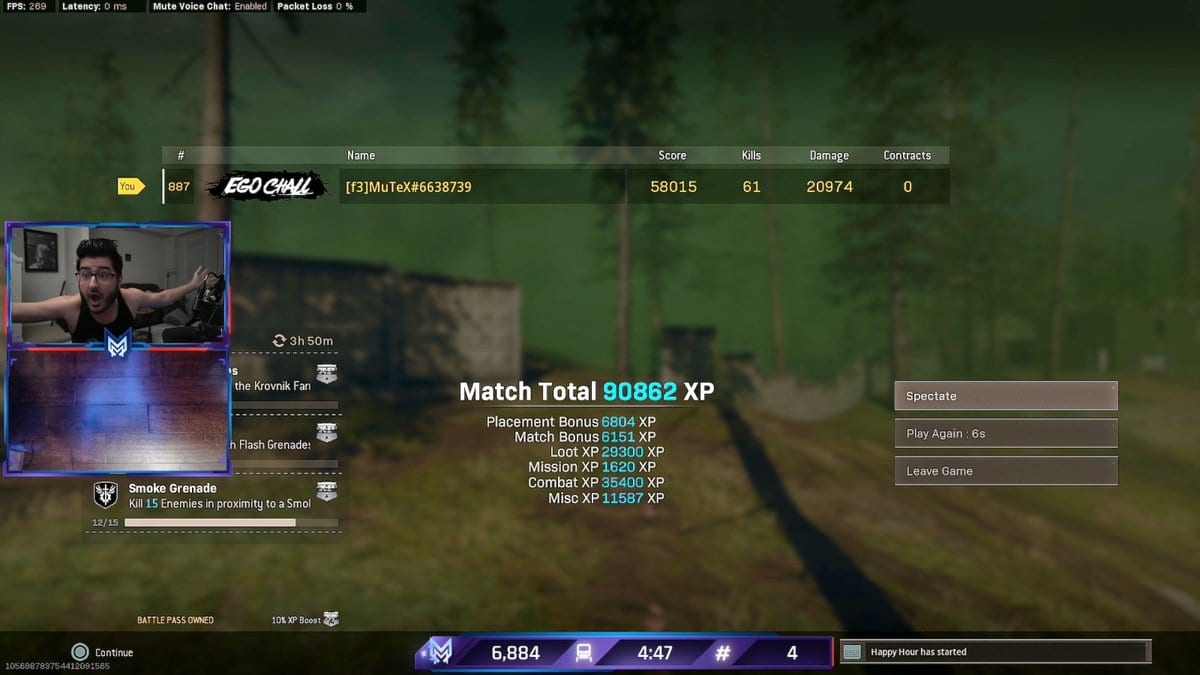 One focused Warzone streamer has managed to smash the world record for number of kills earned in a Solo vs Quads match.

Charlie ‘MuTeX’ Saouma was solo queueing in quad lobbies when they achieved the world record. Decimating the majority of the server, there were able to amass a total of 61 kills before meeting their demise.

That overtakes the previous world record of 60, previously thought to be unbeatable. That record was last set by Aydan ‘Aydan’ Conrad in November 2020.

How did MuTeX achieve the world record?

MuTeX didn’t seem to be following any sort of strategy for achieving the world record, though it’s clear that they’re exceptionally skilled at Warzone.

They began the match by landing at Nakatomi Plaza in the Downtown area. The building was recently added in the ‘80s action hero event and contains an impressive amount of high-tier loot. MuTeX was able to use the excessive loot to amass 16 kills before evacuating for the safe zone.

The record was at risk a number of times throughout the match. MuTeX ended up getting sent to the Gulag, but won their gunfight and was brought back into the fight.

The Mirage and Soft Touch weapon blueprints carried MuTeX to victory – that’s the CR-56 AMAX and Bullfrog weapons if you want to emulate the loadout for yourself.

The streamer did comment that they felt their opponents were of lower skill than usual. While running for the zone, MuTeX comments: “This is the ultimate sh*tstain lobby. I’ve never seen a lobby like this.”

MuTeX wasn’t able to secure the win, but that didn’t matter. They placed third overall, but still managed to turn over 61 kills in total, netting him a new personal best and world record.

It doesn’t seem like MuTeX has found a low-skill lobby on purpose. A recent report suggests that some streamers have been using VPNs and geo-gating to land themselves easier opponents [via GamingIntel].

The battle for world records rages on

MuTeX also holds the world record for the most amount of total kills on Verdansk ‘84. That said, they’re still behind Ayden for the overall world record. Ayden and his squad managed an impressive 162 kills on the original Verdansk map back in March.

How long do you think it’s going to be before this new world record is broken? Let us know across our social channels.