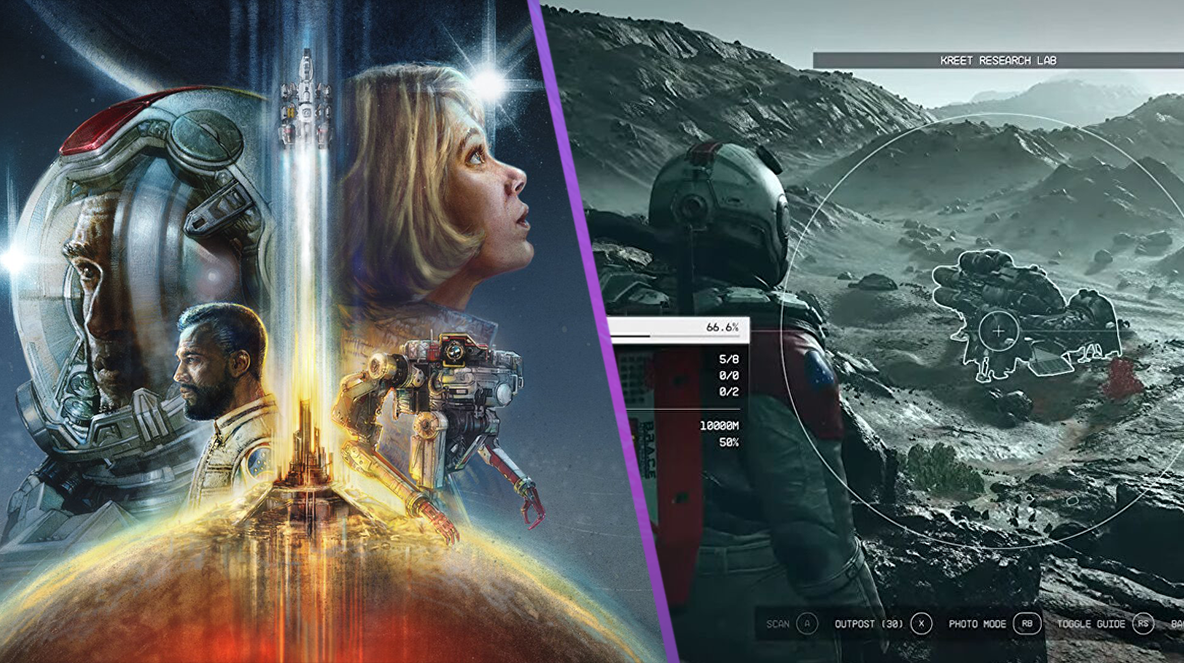 First announced in 2018, gameplay of Starfield has evaded us for 4 years, but finally, as part of the Xbox and Bethesda Games Showcase, 15 minutes of Starfield gameplay has been released.

The gameplay is narrated by none other than leading industry truth economist, Todd Howard, as he walks us through several of the core features of Starfield and its huge open universe. For those who want to get right to it, here’s our very first look at Starfield.

The first thing we’re introduced to is an extended look at on foot, planetary exploration in Starfield, as the player character exits his ship with a funky robot and explores the moon of Kreet.

The planet gameplay seems like a mash between Fallout and No Man’s Sky, with the looting, exploration and random combat encounters you’d expect of the former combined with mining of raw materials and discovering new flora and fauna of the latter.

The player character then takes on an enemy base, showing a brief view of combat and gunplay. There were no ‘powers’ in play and no V.A.T.S either, so it’ll be interesting to see how fps combat is kept fresh throughout your Starfield playthrough.

After this, we then get a rapid fire introduction of several features we can expect in the full game. These include Bethesda’s most extensive character creator yet, with a perk system that is plucked straight out of Fallout 3, along with a skill tree in which you can unlock new skills which then rank up when certain conditions are met to make them more powerful.

Base building from Fallout 4 makes a return, allowing you to create ‘homes away from home’ anywhere in the open world and using natural resources to grow food and create new items.

Create Your Own Ships – Explore 1000 Planets

One of the biggest surprises was the ability to create your own spaceships with a ton of different parts and fully customisable liveries. You can also have a customisable crew of NPC’s, and yes…you can fly.

Seeing the ship full controllable out of atmosphere, complete with some very decent looking space combat, definitely acted as the selling point for a lot of eager viewers.

But, never to be outdone in ambition, Todd wasn’t done, and revealed the true scale of Starfield. Starfield features 100 planetary systems, with over 1000 individual planets in the game, all fully explorable.

Now, to temper expectations, that doesn’t mean every planet will be teaming with things to do or vaults to raid or words of power to absorb, but the scale cannot be faulted. It also wasn’t clarified if you can enter or leave atmosphere in the same way you can in games such as No Man’s Sky or Star Citizen, but we’re sure this will be clarified nearer release.

Despite the niggling dread of yet another crazy, controversy laden release for Bethesda, this initial showing of Starfield is truly out of this world.