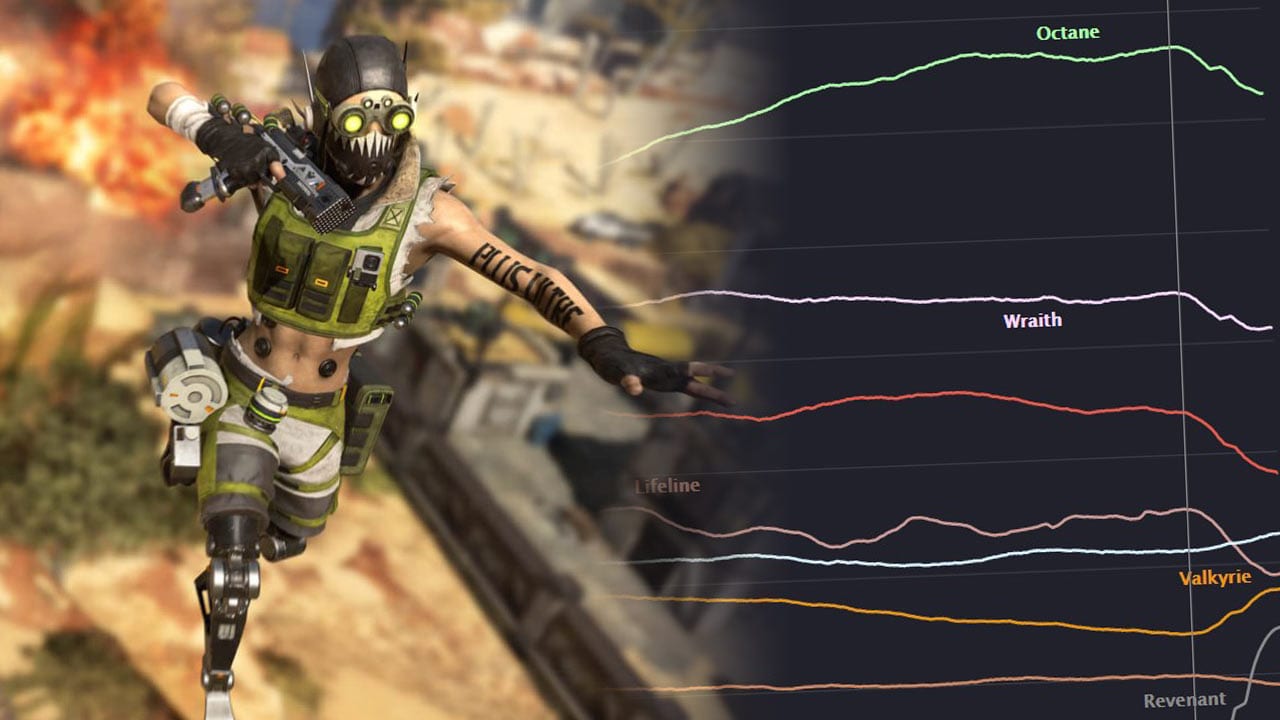 Of the 17 available characters in Apex Legends, some are far more popular than others.

Whether you’re a fan of getting up close and personal or prefer a calm, tactical approach, there’s a character for you here. Well, let’s be honest – there’s a very slim chance of any approach being ‘calm’ in Apex.

Beyond personal preference, there are Apex Legends that are simply deemed more viable than others. Some possess abilities that are crucial for the team dynamic, others provide the essential movement mechanics that let players dominate as lone wolves.

Let’s break down the top five most popular Legends as dictated by their pick rates. There’s also some interesting trends coming into play as we move into the second half of Apex Legends Season 9.

A rather surprising pick, Octane is by far the most popular Apex Legend out there right now. With a pick rate of 16.5%, he lands far ahead of the next Legend by almost 4%.

I say surprising because Octane’s abilities don’t make him inherently better at actually fighting other players. His abilities are all focused around movement and staying alive, which is perhaps why attractive to most players.

It might be a coincidence, but the average rank of Octane players is Gold 4. That might seem fairly low in the grand scheme of things, but it’s a touch higher than the other Legend average ranks which sit in the silver bracket.

Next up is Wrath, which seems to me like the more obvious popular pick. I’m yet to have my squad filled by a solo player that isn’t playing Wraith. She’s clearly the number one pick for people playing by themselves.

Again, most of Wraith’s abilities are movement based. Her ultimate makes it easy for either quick getaways or tactical advances. Her phase shift and passive voice that tells her when enemies are looking at her make her a fantastic choice for players who’d rather not rely on team callouts and pings.

She’s another character that enjoys a rather high average skill rating at Gold 3. Clearly, players who pick her are doing something right.

My personal favourite, Bloodhound ranks third in the list of most popular Legends. This is likely because they fit in excellently with a team dynamic.

Their tracking abilities are second to none, making things much less tense for any squad. Knowing exactly where a team has been recently and when they might be approaching you gives squads that vital tactical knowledge. Honestly, it’s hard to imagine an Apex squad that doesn’t include Bloodhound.

Interestingly, the pick rate of Bloodhound does seem to be falling off significantly in the last few days. That might be because of the recent Genesis collection patch which nerfed their abilities fairly significantly. It’s still possible to garner a lot of important information with Bloodhounds abilities, but the cooldowns are now much more strict.

It seems as though the Revenant and Horizon buffs are doing their jobs, though. Both of those characters are rising in popularity as they approach the top five bracket.

Coming in close behind Bloodhound is Pathfinder. It’s hard not to love this little bot with its constant upbeat witty banter. It also helps that their abilities provide some excellent movement abilities that can benefit the team.

The zipwire and grapple hook are in a similar vein to Octane in that they can be incredibly useful for the squad in a pinch. While similar, Octane likely beats out Pathfinder thanks to his ability being much less clunky and restrictive.

The launch pad can be placed down anywhere and it’s much harder for enemies to track flying targets. On the other hand, the zipwire is limited in where it can be placed down, and players on the line are fairly easy to track while riding.

Despite its limitations, Pathfinder remains a constant popular pick for players. His pickrate has maintained steady for several months and only seems to be increasing in popularity.

Last up is Lifeline who has just seen a significant drop in popularity. She was actually more popular than Pathfinder until a few days ago, but the Genesis patch seems to have changed that. In fact, she’s actually close to getting overtaken in popularity by Valkyrie, who is on a sharp rise.

Lifeline received a decent nerf in the recent patch with her hitbox being widened to fit her character model more closely. As a result, she’s now much easier to hit from a distance meaning she’s less viable in a gunfight.

Her abilities still bring a lot to the squad dynamic, though. Dropping in resources for the team can be a literal lifeline for squads who have just had to respawn. Her healing bot is also extremely powerful after intense teamfights. She may have seen a few nerfs recently, but she’s still more than capable.

As mentioned, Revenant, Valkyrie and Horizon are all seeing sharp upticks in popularity after the most recent patch. While Respawn wants the meta of Apex Legends to be as balanced as possible, it also doesn’t want to see the game become stale.

Thankfully, the pick rate graph shows that the landscape of popular Apex Legends is constantly changing. Whoever your favourite hero might be today could be completely different in a few months down the line.

Are you surprised by some of the most popular Legends in Apex? Let us know across our social channels.