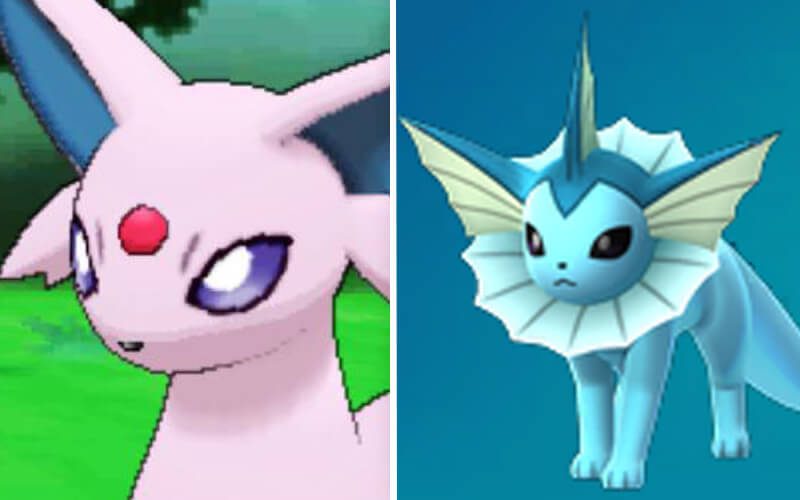 Pokémon GO Gen 2 is on the way, and snippets of information have been appearing here and there as it edges nearer to our phone screens. This might be the most exciting news yet: apparently, there’ll be a total of twelve Gen 1 Pokémon that you’ll be able to evolve into Gen 2 Pokémon, once it releases.

Take a look below, and get a move on, those candies won’t collect themselves. We’ll be listing the new Pokémon in alphabetical order, so if you’ve got a certain one in mind, you’ll have no trouble seeing whether it made the cut or not.

Vileplume is another possible third stage evolution, and it’s already in the game; we’re not quite sure as of this moment how you’ll decide, or even if you’ll be able to decide on which final evolution you will end up with. Maybe the process will be random, as was the case with evolving Eevee.

Blissey is Chansey’s evolved form, and although she looks pretty much the same, if only a little bigger, she’s a good bit more powerful. Seeing as it’s only a second stage evolution, you’ll most likely be looking at 50 candies – but we could be wrong. Anyway, ignorance is bliss (sorry, had to).

Crobat will be a third stage evolution for those pesky Zubats that are nigh-on impossible to catch, especially if you’re shit at Pokémon GO like I am…

Crobat will be an evolution of Golbat, which is an evolution of, of course, Zubat. Seeing as it’s a third stage evolution, and the Zubat to Golbat transition was 50 candies, 100 candies sounds about right this time around. Start saving now, and you’ll be ready to go right off the bat (see what I did there?).

Joining our friends Vapereon, Jolteon, and Flareon, we have Espeon. Espeon will be another evolution for Eevee, and it’s unknown whether there’ll be any sort of naming and evolving easter egg just yet, like with Espeon’s Gen 1 friends. We’ll keep an eye out.

Also coming to Gen 2, we’ve got Hitmontop. He’s a second stage evolution for Tyrogue, who isn’t actually in Gen 1. Currently, it’s unknown how you’ll be obtaining this one, but it’s probably got something to do with Tyrogue’s other two evolutions, Hitmonlee and Hitmonchan.

Honestly, Kingdra is probably one of the most awesome sounding Pokémon names I’ve heard so far. Kingdra is an evolution of Seadra, who’s an evolution of Horsea. Therefore, you’ll be looking at 100 candies most likely, as it’s a third stage evolution, and evolving from Horsea to Seadra was 50 candies.

Porygon2 is, you guessed it, an evolution of Porygon. It’s an extremely fitting name, don’t you think?

It’ll need 50 candies to level up, unless we’re missing something – after all, it’s still a second stage evolution.

An evolved form of Poliwhirl (sort of) this’ll likely set you back 100 candies. We say sort of because it wasn’t quite an evolution, back in the day – rather, you needed to trade a Poliwhirl whilst holding a King’s Rock. It shares space with Poliwrath, the other third stage evolution for Poliwag.

Scizor’s the evolved form of Scyther, and he’s worth the effort simply because of how incredibly awesome he looks. The process of obtaining it was a little complicated back in the old games, and hopefully this time around it won’t be the case. He’s a second stage evolution, and you’re probably gonna need 50 Scyther candies to do the job.

Slowking is Slowbro’s evolved form, and seeing as he’s a third stage evolution, you’ll once again be needing 100 candies. (Most likely, anyway.)

It’s unknown whether the new Pokémon will be receiving power boosts or anything, hence upping their candy costs. We’ll see, soon enough.

Steelix is a giant snake type rock looking thing, essentially. He’s the evolved form of Onix, and he’s a second stage evolution (again), so you’ll probably be needing 50 candies to get your hands on him.

That shouldn’t be too hard. Just keep an eye out for any Onix you might run across.

And finally, we reach the end of our list. Welcome Umbreon, which is another Eevee evolution, and you’ll probably be looking at around 50 candies, seeing as it’s a second stage evolution. How exciting, we’ll be able to have a mini Eevee army come Gen 2’s release.

And that’s all twelve of the upcoming evolutions to be available in the Gen 2 update for Pokémon GO. We’ll be sure to keep an eye out for any announcements regarding them, and regarding Gen 2 overall.