Video games have come a long, long way. From small little pixels in a defined space to massive beautiful worlds to explore. While we may eagerly await to pick up the latest video games and consoles, it’s important to look back and check out the incredible video games from the past. One YouTube channel that does just that is RetroLiberty.

RetroLiberty stars Aaron Stapish and Ricky Avila where they focus on looking back at the consoles that they not only grew up with playing but continues to hunt for video games released for the system to this day.

PlayStation Gang: I gotta admit, I’m having a bit of a fan moment. I love the show and content of RetroLiberty. How would you describe the channel?

Aaron Stapish: Hahah well thank you dude! I appreciate the kind words.  RetroLiberty is a show about two guys who grew up in the 80’s and 90’s who have always been gamers. When we “grew up” we both firmly believed that gaming was perfected in that time and we felt the need to share our love for retro gaming with the internet…whether it be collecting, reviews, top 10’s, or whatever…it’s a passion we both felt we had to share.

PSG: One particular series that really caught my attention to RetroLiberty and it was actually the Metal Jesus Rocks shout out video that I first heard was about the game hunting/collecting videos. Do you and Ricky have a game plan or a general guideline before searching? 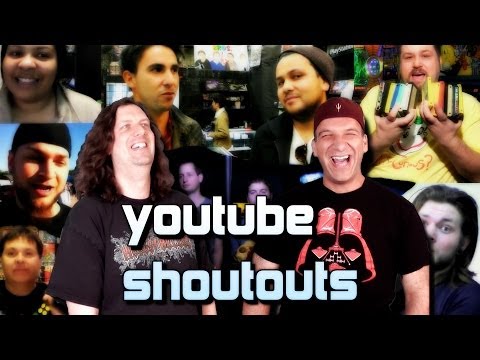 Aaron: Actually no. We like to keep game hunting as fun as possible. Our rules are simply to go out and have fun no matter what. Even if we do not find any amazing games …or any great deals. But…yes we do have games that we are on the lookout for but we don’t stress if we can’t find them.

PSG: How often do you find hidden gems? Expensive games on the cheap, rare games, missing titles from a collection? Do you limit yourself from searching online retailers (eBay)?

Aaron: We find hidden gems a lot. They are usually easy to find because most re sellers do not pick them up. They usually look for big popular titles. Hidden gems are awesome because the majority of the time….people sell them for just a few bucks. As far as finding expensive games for cheap…I’d say about 50% of the time we go….it happens. And when it does, you get a rush! And Neither Ricky nor I ever use eBay….ever hahah.

Aaron: Very very true. But its weird….I run across a ton of genesis cases…and most people don’t even want them for some reason. I have no idea why. Nes and SNES boxes are hard to come by….and also even harder to come by in decent shape due to them being cardboard.

PSG: When does a console go from current to retro? Do you keep to just the consoles released around the 1980s-1990s or well you branch to newer systems if you’re not already actively collecting recent titles/systems.

Aaron: That’s actually how I personally look at it. Its kinda like “oldies” when it comes to music. When I hear classic rock stations playing nirvana…or something like that…I’m like “huh?” Haha I consider led Zeppelin…etc classic. I feel like most cartridge based games and maaaybe some CD based games “retro”

PSG: So if a gamer was to go back to the classics and start collecting, where do you recommend they start off with in terms of a system that is relatively easy to collect for and won’t break the bank when completing?

Aaron: The NES for sure. Now…if you are looking for the big titles….ehhh not so much. But with over 700 games on the console the games are easy to find. And an overwhelming number of games are less than 5-10 bucks. Plus….its the NES. It saved video games haha.

PSG: haha very true, we’re Sony based but we’ll give Nintendo that one. I’ll risk getting called out if I don’t ask this but rarest game owned/greatest find?

PSG: Ooh that is a nice find! So what are you playing now? Anything you can recommend? Not going to lie, after seeing Sunset Riders shown off on Retro Liberty, I’m keeping my eyes peeled for a copy out in the wild!

Aaron: Haha heck yea! Sunset Riders is awesome! And right now….I am working through the +mode in shovel knight. I’m also playing decap attack on the Genesis. And as far as a recommendation…..I would say give Crash Team Racing a go! With all the Mario Kart 8 love going around….its a good time to play some CTR

PSG: I might be wrong and didn’t do enough homework before the interview but I don’t think we’ve seen a game room tour of your personal collection. From what I can from the videos however is that you have a very notable collection. Rough estimate on how many video game titles/consoles you actually own?

Aaron: Shhh don’t remind everyone! Haha we did one for Rickys room…..but that’s all. I would say that I have about 1,500 games. I actually am not a fan of game room tours….which is why I avoided doing one …shhh..NEXT QUESTION hahahahha!

PSG: haha moving along. So Retro Liberty has been up for a year or two now? I’m sure you’ve been collecting far before the series started. What triggered the idea of starting a channel in the first place?

Aaron: Hahah we will hit 2 years in a few months. Yea we were both collecting before the show. And as far as starting a show….I was obsessed with the gaming scene in YouTube. I was dying to be apart of it….the people all seemed so real and so much fun. And I have met most everyone ….and let me tell you…they are all awesome in real life!

PSG: Yeah it seems that everyone knows each other throughout the different channels like its an active community within YouTube. What goes into the production of an episode?

Aaron: Too much…..haha I brought it upon myself. But I bought all the equipment myself. Nikon1V1 with a RODE mic attached. I edit about 20-30 hours per episode. And I edit on a iMac using Final Cut Pro X. I am obsessed with over editing …hahaha its super fun to turn video clips into a full show. Its daunting in the beginning… But once a episode is half done…it gets very exciting. And its all worth it!

PSG: With that said, when/what can we expect next coming down the Retro Liberty pipeline next?

Aaron: I have been pretty on the ball with weekly videos lately. But this next video may be a tad late….its a NesPursuit and those take the longest to edit….it gets tiring with a full time job and a wife and 3 kids. But its all for fun so its enjoyable to do.