One bullet can do a lot of damage. If you were trying to kill as many baddies in a game with one bullet as possible, how would you do it? Maybe lure them all near an explosive barrel? Obviously, that would be cheating, since it’s the explosion that kills them, even if it’s caused by the bullet. Anyways, we don’t need to waste any more time on semantics, let’s get right down to the business.

A scientist named Vucko100 (It’s fair to call them a scientist, right?) lined up a row of people for their sadistic execution line, and even went as far as to test out different guns and bullets to see which one would be most effective.

The first few attempts fell short, their handguns just weren’t powerful enough to breeze through enough people. But this trailblazer didn’t stop there, no, they continued to push the barrier and to find out exactly how far they could take it, without ever stopping to ask if they should. 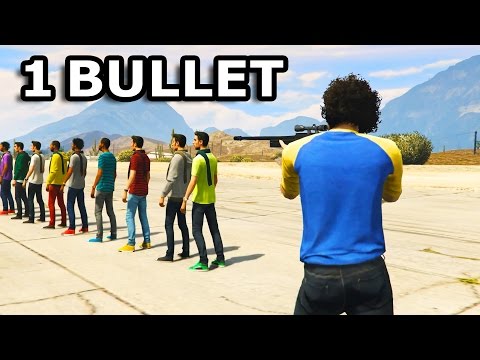 So, there’s yet another Grand Theft Auto mystery solved. No animals were harmed during this experiment, just countless people.