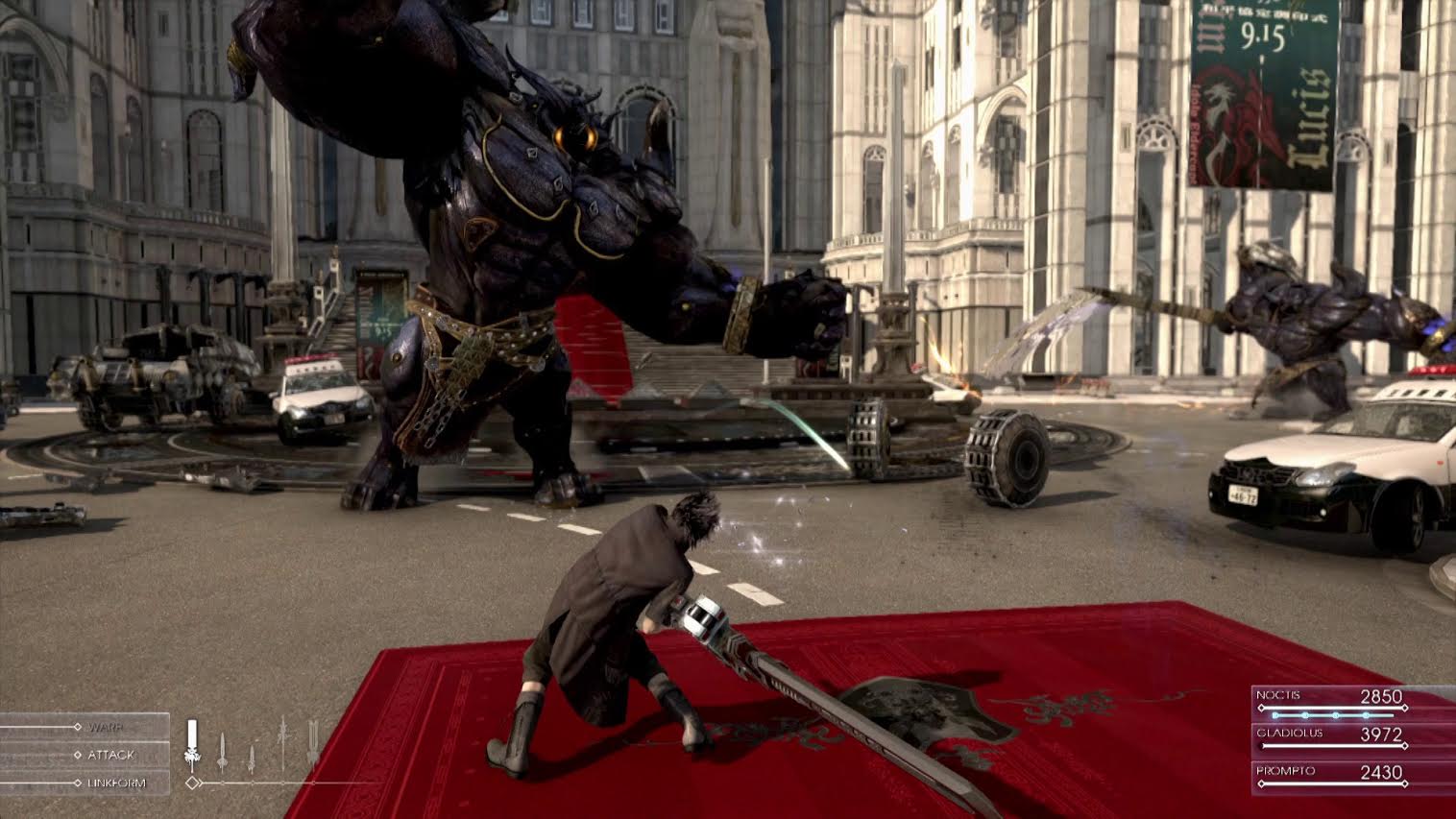 Finally Fantasy always amazed us with its crisp graphics and its in depth story but this is the first time I’ve ever played a game that told me what it was within the first five minutes of playing. The game itself begins with a quick and simple message:

“Final Fantasy for Fans and First-Timers”

So does the 15th installment of this franchise actually appeal to fans as much as first time players? Well, I guess that’s what your here to find out!

Final Fantasy XV puts you in the shoes of Noctis, the heir to the kingdom of Lucis. You’re not alone however and are joined by your three companions, Ignis, Gladiolus and Prompto. All three of you are actually on your way to a wedding one that must go well in order to fulfill a peace treaty that the kingdom desperately needs.

Well, these things are never just that easy and as always, your princess ends up in another castle and its up too you and you alone to save the entire world from an army, giants and even gods. Which brings us too the first downfall of FFXV, its story. The story itself is very vague and to properly understand everything that is going on you would need to watch a full length CGI Final Fantasy movie and spend a good few hours soaking in all the detail and exposition that’s hidden away in all of the many conversations between characters in the game.

Certain events and key story elements are explained too you in cut-scenes which does end up making some of the story pretty plain and easy to understand, even if you don’t quite now how it ended up happening in the first place.

As always its easy to get attached to the ‘main cast’ of the game. Witty characters that pull you in with their own stories and tales means that FFXV does a great job of making sure you care for every one of your companions throughout the game or even those you might be fighting against. You will find yourself smiling at the conversations between the four heroes and more often than not will release you just spend an hour listening to them talk rather than playing the game itself.

The games engine is nice to play with, motions are smooth and the controls are easy to get on board with from the offset, even if you’ve never played a Final Fantasy title before. There were however a fair few technical issues we came across when playing including massive frame rate drops and, compared to the PS4 version, blurry textures.

Each weapon seems to work just he way you want it. Whether lunging into battle with a sword or slicing the air with an axe each weapon acts the way it should making combat feel smooth and perfect. You can even link up with your friends to produce some amazing attacks that will dazzle you and destroy your enemies or you could opt into the new ‘Wait Mode’, which simply pauses the gameplay whenever Noctis, the player, isn’t moving. Allowing you to carefully plan and predict your enemies movements before they happen. Its a very simple tool and as much as you think it might it doesn’t get in the way of fights at all!

The progression and leveling up system is also very unique. Whilst you earn XP the normal way, from killing beats or completing quests, you wont actually level up until you either rest at an Inn or a camp. Points can be spent on anything from combat to the way you can cook, meaning you can take your play style in any way that you want. Aggressive Warrior or Cook, you decide.

When you get a bit further into the story the open world boxes’ itself in a lot. Removing open space for puzzles and towns for linear corridors and during the earlier parts of the game you are forced to hold RT to drive yourself to a location listening to conversation for what feels like hours.
For fans of Final Fantasy I would say that without question or hesitation this is the game that you have been waiting for. It brings everything you love to life whilst giving you more quests than you can throw a stick at however first timers might want to be a bit more wary. The stuttering storyline can be looked past but if you pick up the game you might want to consider getting a PS4 if you care about the graphics.