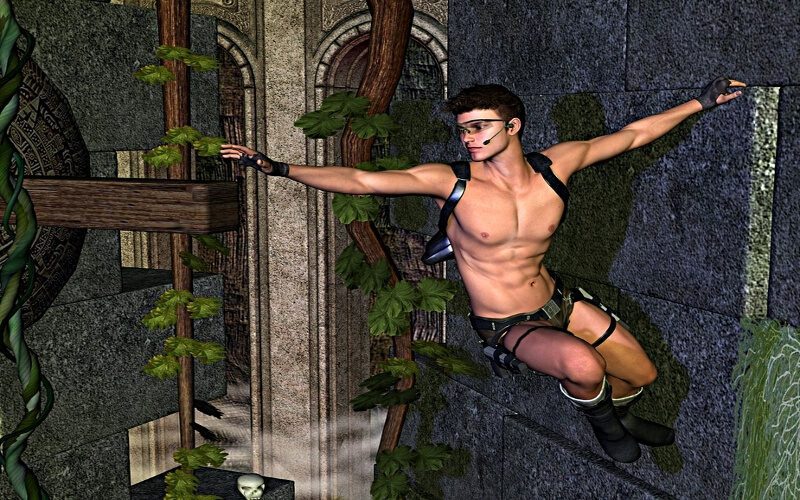 Everyone has at some point wondered about the appropriateness of Lara Croft’s typical tank top and jean shorts combo in regards to the rather extreme adventures she seems to find herself on again and again. I mean sure, it’s probably quite comfortable and allows a great deal of freedom of movement. However, I’m guessing that in the same situations in real life, those clothes wouldn’t last very long against a hail of bullets, a tiger or a T-Rex (and probably not you, either).

In the spirit of gender equality, a German artist thought it’d be a cool idea to design a male version of Lara Croft. Not only that, but he also found it fitting that he dress in a similarly skimpy garb, albeit exaggerated to the nth degree. The result however, is a strange one.

In the pic below, say hello to Nate, otherwise known as “Mr Tomb Raider.”

It has to be said, the quality and detail of the artwork is fantastic. The artist, Raffael, released this and other photos via his DeviantArt page Ulysses0302. They are genuinely fine pieces of work, and it’s very clear a lot of love and attention has gone into producing such high quality work. His work has also become very popular, with sites such as Tumblr (expected, I know) gobbling it up and spreading it far and wide to thousands people around the web.

As for the dress style however, well, that’s another matter. Although Lara can easily be criticized for under-dressing for her job, at least she’s rocking more than the “Power Pouch” (my name for Nate’s intimidatingly bulging adventure shorts) in her travels.

Although I’m very sure the pictures were made in an attempt of gentle mockery, Nate has ended up looking a little stranger than I think was intended. Then again, I could just be incredibly jealous of his rock hard abs and the sheer amount of junk in his trunk.

Be sure to check out Raffael’s page on DeviantArt if you happened to like these pics. Raffael typically creates a lot of gay themed pieces in a variety of backgrounds and situations, but each piece is of an exceptionally high quality. Hopefully the next time he takes a stab at another gender swap gaming lead, he’ll allow them the decency of covering up their nips at least.