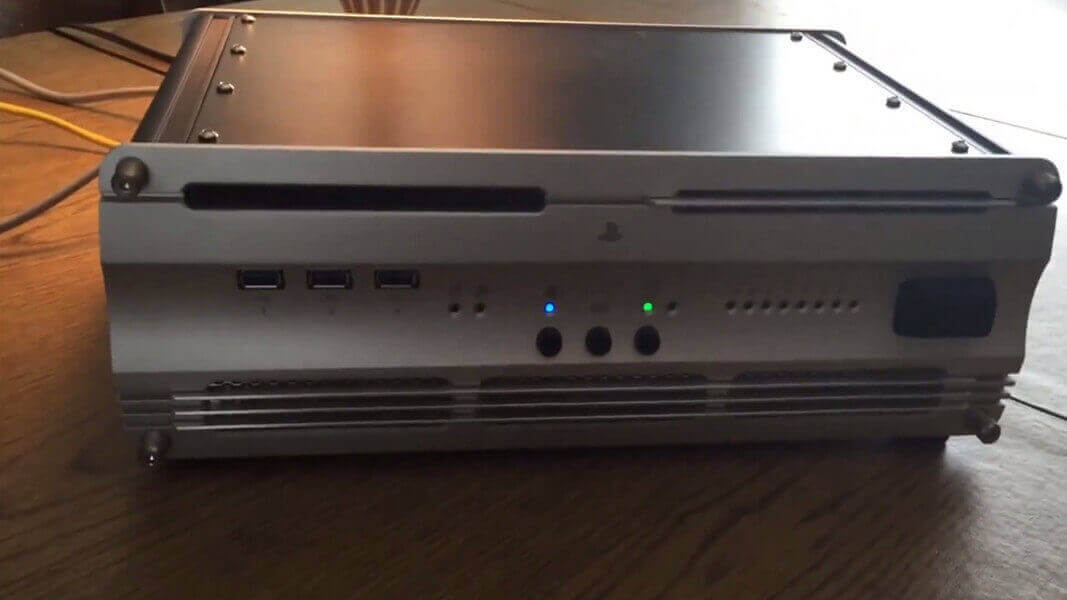 If you’ve ever wondered what a developer kit for a console looks like, look no further. Included in this article is a list of developer kits of some of the most popular consoles ever.

Something you might notice, however, is that the developer kit sometimes looks completely different from the final product. Have a look and you’ll see for yourself.

Right off the bat, and you can already see the developer kit for the PS4 is more than a little different from its commercial incarnation.

Nicknamed “Orbis”, some people mistakenly thought this would be the title of the PS4 before it was released. Although it appears like a large steel brick with a few oddly shaped holes in it, it gets the job done. It’s better if you’re beautiful on the inside anyway.

The granddaddy of the PlayStation series, this edition looks practically identical to a typical PS1 console, with the added capability of acting as a debugging unit that developers could use to fine tune games. Oh and a sweet blue paintjob. Nice.

“Is that a completely run-of-the-mill Xbox One I see before me?” To those who asked this question, the answer is yes. Apparently, any Xbox One can be converted and changed into a development kit, as of summer this year.

A clever move by Microsoft to get more people into games development? Possibly. Although more likely it’s another sneaky move to get you to finally install that Windows 10 update you’ve been avoiding like the plague.

Harking back to the original Xbox “one”, this dev kit actually looks pretty similar to a regular Xbox, although a little chunkier.

It must’ve been pretty cool for developers to be able to see inside the console while testing their games. That away at least, they could be equally as confused about what all that wiring actually does as why their protagonist is flipping inside himself backwards up a mountain.

Far from the sleek small white rectangle we’ve come to know and love, the dev kit for the Wii actually looks more like an airplane black box.

NDEV was the title given to this kit, and it looks like it could handle just about anything a developer could throw at it – be it sublime and visually demanding titles like The Legend Zelda: Twilight Princess and Okami, or a brick.

Ah the Gamecube. The console that brought us such classics as The Legend of Zelda: Wind Waker, and Super Mario Sunshine. And of course, highly traumatic experiences like Eternal Darkness.

There’s not much difference to be seen here between the dev kit and a regular console. However, the dev kit opts instead to use a cartridge reader for testing games. Why? Well you’d have to ask Mr Miyamoto about that one. He was probably still a little hung up on the N64.

Although the Dreamcast could never match the all-conquering might of the PS1, the sheer longevity of the console is incredible. Each year, even now, there are still new titles being developed and released for it.

As you can see from the picture, this dev kit basically looks like that computer tower your dad bought way back in the 90’s. In it’s day though, this was pretty hi-spec technology. It’s a testament to SEGA that even today in a market saturated with new technology, people still use this to create new titles for a console more than 15 years old.

Other articles you may enjoy: