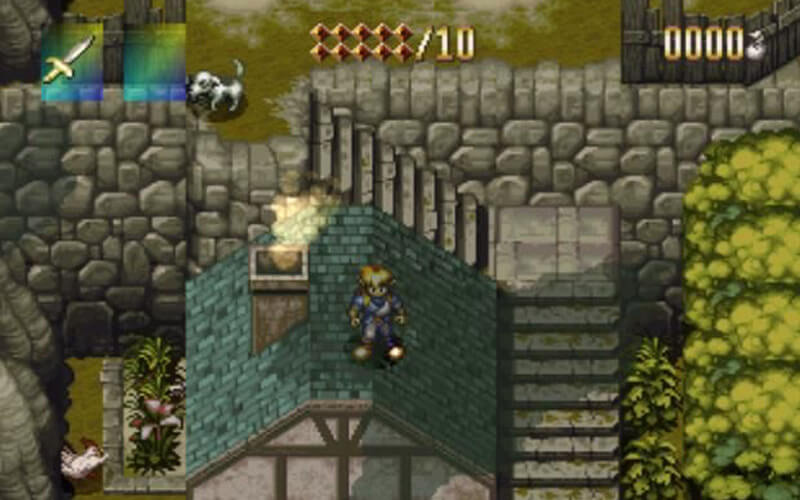 To say the least, I’m a huge fan of RPGs. I’m always currently playing at least one, and I’ve been an RPG lover ever since I first rented Super Mario RPG from the video rental store.

I bring up Super Mario RPG because that game falls in what I like to call the RPG golden era. The fourth and fifth generation of consoles gave birth to some of the most beloved titles out there. Chrono Trigger, Final Fantasy IV-IX, Legend of Dragoon, Xenogears, and Breath of Fire, just to name a few. Despite many of the games getting the recognition they deserve, however, I feel like there are a few that just don’t get any love. If you’re wanting to go on a classic RPG binge without playing Final Fantasy VII for the tenth time, here are a few games to check out.

Alundra was more or less Sony’s answer to The Legend of Zelda, sporting many elements of the 2D Zelda games such as a top-down perspective, dungeons brimming with puzzles, and a hoard of secrets to find.

But it has its own unique elements as well. Alundra has a focus on platforming, which is absent in most 2D Zeldas The game also possesses a dark story that will make Zelda’s darkest moments seem kiddish.

I played this game a couple years back, and while it was frustrating in some parts, it was one amazing adventure. The game is available on PSN, and at $5.99, it’s a steal.

The original Lufia is a decent RPG, but its second entry, serving as a prequel to the first game, is where the series shines. Lufia II blends traditional JRPG exploring and combat with puzzle-solving worthy enough for any Zelda (or Alundra) game. The story isn’t complex, but the characters and villains are definitely interesting enough to keep you playing. I checked this game out in high school, and I wondered why it didn’t get recognition.

Unfortunately, the game doesn’t have a Virtual Console release as of this article, and copies are quite expensive, so playing it legally is rather difficult. There’s also a remake, Curse of the Sinistrals, for the DS. While I haven’t played it, many fans say it’s inferior to the original.

Suikoden II is a cult classic for a reason. It follows the same basic formula as the first game, where you’re able to recruit over 100 people, known as the Stars of Destiny, to join your cause. The story is much darker than the first game’s, with best friends turned against each other and parents getting slaughtered in front of their kids by Luca Blight, a villain up there with Kefka in insanity.

For a long time, the only way to legally play this game was through buying it from third-party sellers, who would charge around $100 for it. However, in late 2014, the game was rightfully put on the PSN at a much more reasonable price. The first Suikoden was released on the PSN in 2008, so why it took so long, I don’t know.

Who doesn’t love a good tactical RPG? Bahamut Lagoon has aged quite well in the tactical RPG department, and with a serviceable story and cool characters, it’s well worth playing.

Unfortunately, most of the US didn’t notice it. Why? Because it was never released in the US! Nothing quite irks me more than when a good game never got localized. It did come out for the Virtual Console, but only in Japan.

So unless you know Japanese and can import it, you may want to try the fan translation.

The Tales series has a decent following in the US, but many have not played its early 2D entries. Due to the original title sharing a name with the planet from Masters of the Universe, Tales of Eternia was released as Tales of Destiny II in the US, despite having nothing to do with the original Tales of Destiny. To make things even more confusing, there’s an actual sequel to Tales of Destiny that shares the same title, although it never made it to the US. And you thought the US changing the names of Final Fantasy IV and VI was bad!

While the games before it, Phantasia and Destiny are strong titles, Eternia is where the series begins the shine. The 2D action combat has aged quite well, there are two world maps to explore, and the story will keep you hooked to the very end. Top that off with plenty of sidequests, and you have a game worth checking out. It’s also one of the rare PS1 RPGs to include voice acting. Like most PS1 games, however, the voice acting is cheesy. (One interesting tidbit is that the protagonist, Reid, is voiced by Kevin Miller, who is best known for Sly Cooper.)
There’s no PSN release as of yet, just like there isn’t one for Destiny. Bamco seems to have little care for the pre-Symphonia games, sadly. Online copies, surprise surprise, tend to be pricy.. There is a PSP remake that made it to Europe and Australia, but that’s about it. But if you can find this game for cheap, or if you can save some money and get it, it’s definitely worth playing.

I decided to put both games together because they both are equally worth playing (yeah, yeah, cheating.) The first two Lunar games have an interesting release history. The first Lunar came out for the Sega CD, and enhanced ports came to the PS1, GBA, and most recently, the PSP. The second started on the Sega CD as well, and had Saturn and PS1 ports. Both games were ahead of their time in their storytelling elements, featuring animated cutscenes and voice acting. Combine that with fun gameplay and an emotional rollercoaster of a story and you got yourself two awesome RPGs.

As usual, there isn’t a PSN release for any of these games (I don’t even think the PSP version was released digitally,) and copies tend to be expensive. But they’re worth it. I got lucky and found a copy of Lunar 2 Eternal Blue Complete for cheap, and it was the PS1 version that came with a music CD, cloth map, a pendant, and much more. You can tell the developers were quite proud of this game.

And those are some of my picks you should check out. I’ve played a lot of RPGs, so if you think there’s one I left out, let me know. Also, I’m trying to get caught up on all the classic PC games, so if you know of some good PC RPGs from the golden age, tell me.

This article was submitted by Adam Sims.