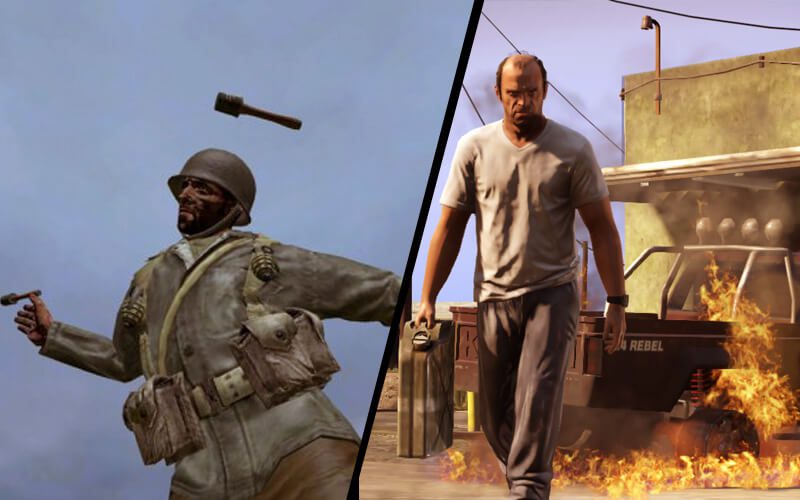 Death, it’s something we’ll all encounter sooner or later. It’s the only plausible outcome in life and every day we edge closer to it. Luckily for us, video games give us more than one shot at life.

However, even death can come in strange ways, especially inside a videogame. It can happen in a manner that can make you go WTF or worse. Today, we look at some of the most stupid ways one can possibly get killed in a videogame –

If you’re like me and get too curious for your own good, you’ve probably done the same. Whether on purpose or accidental, we’ve all become a sidewalk pancake at least once.

In games, especially by the likes of Fallout and The Witcher, falling damage varies. One of the first things I do when I start a new game is test exactly how far I can fall, how much damage I would take and how far until I reach terminal velocity. It’s a good tactic to get acquainted with fall damage to avoid any future embarrassments at key moments.

But even after all the precautions have been taken, you still fall victim to falling to your death from time to time. Maybe your parachute didn’t catch the air quick enough in GTA, or you staggered off a ledge in Dark Souls after a shield bash, whatever the build up was, it never dampens the feelings of pure shame.

So you’re in a firefight and mowing noobs down like they’re nothing, but one of them gets smart and tries to flank you. Luckily you notice and you turn to have a head to head. What happens next?

Well in most cases it’ll be a fair fight with one victor, but this time, you panic. The pressure amounts, you’re one kill from a scorestreak. Your hands sweat, body tenses, toes curl as you take your aim.. and then accidentally throw a frag grenade that bounces off his chest as he slaughters you.

Why this happens, I have no idea but I can sympathize. You look a fool, not just to yourself but also to your opponent who finished you off while all you could do is just sit there, gawping and hoping he’s going to miss to buy you some time.

Being slowly killed by status effects

There are many forms of status effects, burning, freezing, confusion, the list goes on. But by far the most annoying of the lot would be poisoning.

More often than not, poisoning will gradually chip away at your HP, meaning a slow death unless you exhaust all your healing supplies or use aid specifically designed to cure you of said effect.

The worst case of this would be in Dark Souls as poison damage is most commonly dished out by rats; swift, small enemies that fight in groups. If one of those guys lands an attack, all of them will, and you will be poisoned.

Another honorable mention of status effects in Dark Souls – being cursed. Quite possibly one of the worst possible things to happen in DS, being cursed kills you instantly. Not too bad right? Well just wait until you respawn, your HP will be permanently halved until you find a purging stone. And this is why we love Dark Souls.

Veteran CoD players will know the feeling of killing yourself, mainly because the game actually pokes fun at you in the feed. “Mistakes were made”. That’s coming from a franchise that recycles the same game every year.

It could be falling to your death, an unfortunate grenade bounce, accidentally firing an RPG at someone four inches away, there are too many ways to do it, and it always seems to be when everyone is watching.

Not protecting your escort

Nobody likes escort missions, and if someone says they do, they’re lying to be edgy and cool. It slows the pace of a game, especially if that game is like Resident Evil or The Witcher. Your escort will more than likely be a hopeless, quivering wreck who couldn’t fight their way out of a paper bag, so it’s on you to protect them from point A to point B.

The most annoying thing? If your escort dies, the game will end as if you died, but making you feel worse because you failed to do your job. I’m glad escort missions are (almost) a thing of the past.

This was our list of embarrassing ways to die, did we miss a favorite of yours? If so, be sure to leave it in the comments below.