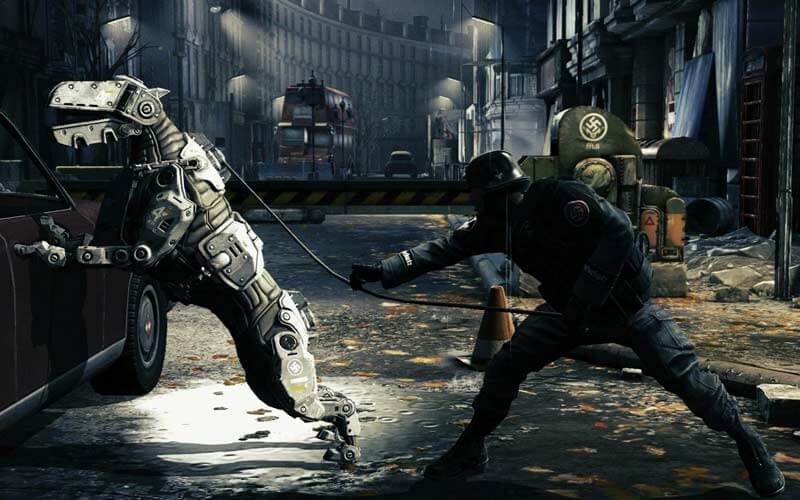 War never changes, but video games sure do. Art often imitates life, and here are some examples of the best video games that have depicted World War 2 over the years. Some games take it upon themselves to re-write history or to take things to crazy over-the-top heights, some games aim to educate the player on the horrors of war and aim for historical accuracy, some games simply use the timeframe as a setting and don’t really dig too deep into it one way or another.

WW2 is a theme that lends itself perfect to first person shooters and there was an abundance of them 5-10 years ago, but we’re aiming to include some other types of games on this list as well.

Wolfenstein 3D was created by the early ’90s dream team of Romero, Carmack, Hall and the rest of the gang over at id Software. It was a huge success, and a kick-ass game that really helped pave the way for run-and-guns and FPS as a whole on PC.

id broke their own sales record for shareware at the time, when Wolfenstein 3D went on to surpass Commander Keen. Not only did Wolfenstein 3D help to define a genre, it also cemented shareware as a viable business model at the time. As you’ll see later on in this list, the Wolfenstein franchise still continues to put out great games, even decades later, thanks to the revitalization courtesy of id Software back in 1992.

In a time when gamers were still hungover from countless unoriginal WW2 games, The Saboteur was a breath of fresh air. You played as Sean Devlin, an Irish guy who was sabotaging the Nazis while they occupied France.

This 2009 open-world game was developed by Pandemic Studios, and it was their final game before being shut down by EA. The black and white style was cool, the game was fun, and The Saboteur received generally favorable reviews averaging out to around 7/10 overall. Like other Pandemic titles, it had its quirks that probably stopped it from reaching the top tier, but overall it excels in the category that matters most: fun.

Let’s take a trip back to 2005, before there was Modern Warfare, before there was Black Ops, before we’d teamed up to take out hordes of Nazi Zombies… there was CoD 2. Who knew what a juggernaut this franchise would become? CoD 2 would go on to sell millions and millions of copies, and was very well-received. If the first Call of Duty game was the spark, CoD 2 was the gasoline that would really get this franchise burning.

The campaign had us playing as four different soliders who were enduring the brutality of World War 2, overcoming incredible challenges, and fighting to be on the right side of history. Infinity Ward travelled all around the world to see locations from the game first-hand, which further increased the sense of authenticity.

2002’s BF1942 is another early ’00’s WW2 shooter that would go on to spawn a massive franchise. The BF series would basically go on to be the slightly less popular, but  more highly regarded brother of the CoD series.

Battlefield puts more of an emphasis on co-operation and strategy as opposed to just running and gunning. It means that there’s more of a learning curve, and having a teammate who just doesn’t know what they’re doing is a lot more detrimental. On that same note, that’s why the series really appeals to people who are interested in a game with more depth, because when you do get a solid team together, magical things happen.

This 2006 RTS game developed by Relic and published by THQ is an absolute fan-favorite for the genre, and in modern gaming in general. This was the first game to display the “Games of Windows” banner. Gameplay involves the American side and the German side, with each nation having their own unique buildings and units. You build buildings, you recruit units, you go to combat. There’s a bit more to it than just that, but you get the idea.

IGN and Gamespy both awarded Company of Heroes the distinction of PC Game of the Year for 2006. This particular list isn’t in order, but if it was – you can bet that CoH would be near the top.

This time around, it’s MachineGames taking a stab at the Wolfenstein franchise. The New Order / The New Blood were well-recieved, typically earning review scores about 8/10. These games were published by Bethesda for current-gen and previous-gen systems, along with PC.

They take place in an alternate world where Nazis have all sorts of crazy robots trying to kill you. These titles are not any kind of incredible genre-defining breakthroughs like Wolfenstein 3D was, but they are absolutely rock-solid first-person shooters set in a familiar and nostalgic universe.

IL-2 has average reviews, with a 3.5/5 on Metacritic the same score on Steam with a 7/10, but it’s also basically the concensus pick for best WW2 flight simulator at the moment. Flight sims aren’t really a blockbuster genre, so keep that in mind when judging the score. If you’re into flying through history, you’ve probably already got this one in your collection.

It might be the nicest looking flight simulator out there, the computer players have to play by the same rules of physics as you do, they handle damage in a realistic way, and all around it’s just a solid flight simulator.

Into the Eagle’s Nest

This is more or less a fairly standard, yet solid arcade-stealth game, which was released for Commodore 64, Apple II, Amiga, and several other platforms. You won’t find it on any “Greatest Game of All Time” lists, but when it comes to WW2 games, they were pushing the envelope back when not a lot of envelopes were getting pushed.

The game received criticism for a poor save-game system, and rewarding players for shooting drunken and passed out Nazi soldiers. If killing Nazis is wrong, I don’t wanna be right.