Star Wars: Episode VIII has a lot to clear up, including Rey’s backstory, how is she a naturally good Jedi, and if she is really down for the rebel cause. We won’t get answers until 2017, but at least we get to learn a little more about the actress who portrays her.

Star Wars has a legacy of casting unknown actors into its big roles; Luke Skywalker was Mark Hamill’s first live action role. Daisy Ridley’s breakthrough role as Rey follows that tradition. The actress played in a few short flicks and an English horror film before getting the Star Wars gig. Today, BuzzFeed got exclusive footage of the audition video that proved exactly why she deserved the role.

The footage shows Ridley doing the scene where Rey gets her mind manipulated by Kylo Ren. Crying on command, Ridley’s intensity easily won over J.J. Abrams.

“What we were looking for was someone new,” Abram says. “This character needed to be vulnerable and tough, sweet and terrified. And to find someone that no one knew who could do all these things took a lot of looking.”

Watch the footage below. 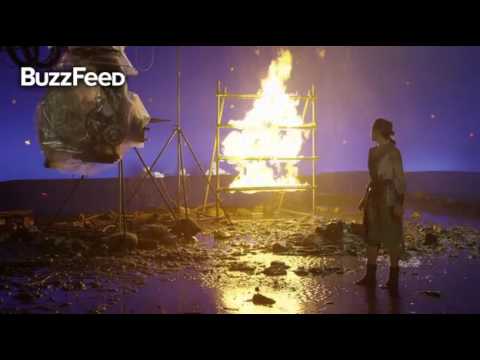