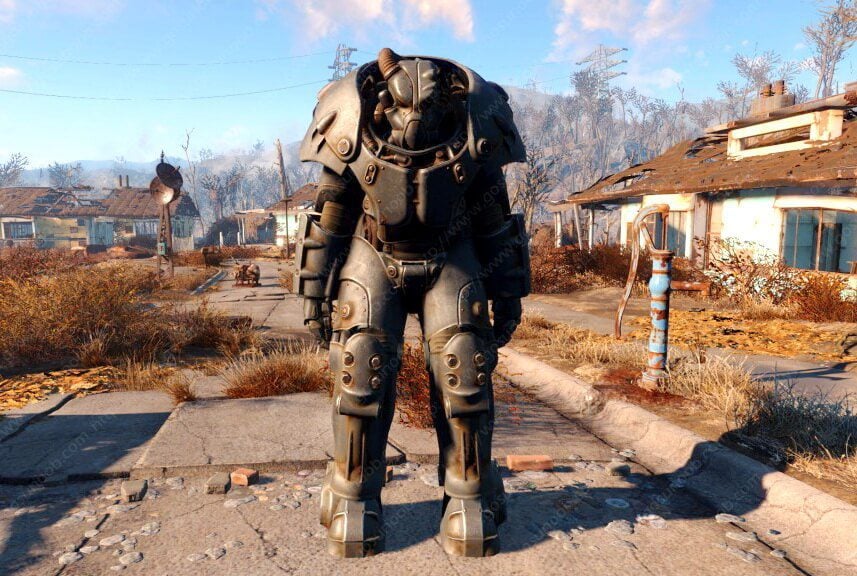 I’ve been playing Fallout 4 since it released, and even though it feels like an eternity of wandering the wasteland, I still haven’t even scratched the surface of what the game has to offer.

My gallivanting hasn’t been for nothing, however. Along my travels I’ve found some very unique items, and I am willing to share my favorites with you.

Probably the best of the Fallout 3 DLC’s took us high above earth to an alien spacecraft, where we were able to meet new friends and kicked a lot of ass. They are back in Fallout 4, sort of.

The alien blaster comes with little ammo, but my god does it pack a punch. One round from this sweet little blaster and Deathclaws will be running away from you in fear!

The best part? It’s not even hard to find! It can be found at an ‘unmarked’ location off the road north of Somerville. You will soon come across the crashed alien ship along with a small trail of blood leading toward an ominous cave. Inside you will find the blaster, but beware, something is watching you.

What’s better than the feeling you get when you defeat a pack of Deathclaws? Yes, thats right, reuniting mother and child in a heartfelt mission sure to touch the hearts of even the most wretched scum in the wasteland.

To get your hands on this item, just head to the Museum of Witchcraft and enter through the basement. If you value your life, don’t go through the main doors! Once you find your way to the bathroom you will find a Pristine Deathclaw Egg. When you pick it up, you’d better run for your life, because daddy is there and he is NOT happy.

You can stay and fight if you want to, of course, if you can handle it. Either way, once the battle is over, head to the nest marked on your map. Once you get there you will find a friendly Deathclaw, which is the little egg’s soon to be mother. On the ground next to the nest, you can see the Claw. Simply return the eggs and pick up the claw. The mother will return to her nest and you can continue to wander the wasteland.

However, be warned because leaving the immediate area around the nest will turn mother hostile causing her to attack you. You could also just pick the egg back up and instantly fast travel to Diamond City before the mother becomes hostile. This will mean you will be able to get the claw and the food recipes from Wellingham. But would you really do that to the poor mother? It seems a bit harsh too me!

The best of the best when it comes to fusion powered suits ready made for the apocalyptic wasteland is the X-01 Power Armor. Luckily you can find an entire set of the stuff in one location. But watch out, it’s heavily guarded, so you might want to stock up on weapons and Stimpacks before you go in for the fight.

Head to the location shown above and enter the building marked Court 35. If you can’t find the signs, it’s the one with the laser turret shooting at you. Once you’re in the building, go up the nearest elevator and then head towards the roof. Once you are there, a pair of sliding doors will open and will reveal both an Assaultron and a Sentry Bot. There isn’t much breathing room up there, so be careful where you stand.

Once you’ve dealt with them, you will notice two newly opened doors on the roof, both of which lead to a console with small flashing red buttons. Pressing both of those will open the door in the centre, revealing a pristine and beautiful X-01 suit. Use it wisely!

The axe-wielding barbarian makes a return in the latest installment of the franchise, and this time we even get to tour the studio that brought him to life on the radio. So when your ammo is running low and the bloodlust is getting to be too much, why not put away that pistol and hack your enemy’s to death with a staggeringly good axe?

The axe can be found in a locked case behind the desk of a former employer in Hubris Comics. The place will feel dead when you enter, but quickly enough ghouls will start running at you from all floors. It’s an easy fight though, and the reward is sweet. Grab the axe and have a good day!

So we have a blaster, a gauntlet, an axe, and a great suit of armor. The only thing missing now is a rifle not to be trifled with, and I have just the thing.

The Cryolator is a weapon that will taunt you from the very instant that you see it just sitting there in Vault 111. As you can see, you need the master lock picking perk to even get into the case, which is something that you won’t get until at least level 18, even if you put all of your acquired points into lockpicking. Well that won’t do at all.

To get the gun a lot earlier in the game, just head out into the wasteland in search of your furry friend. Yes, we mean Dogmeat! Once you and your friend are united, you can head straight back to the vault and simply ask Dogmeat to get it for you.

It’s that simple! Locks are no match for the might of Dogmeat, and you will get the Cryolator a lot earlier than you are meant to. The gun comes with 200 rounds, but the amount you will want to use it means you might want to buy a few more from a vendor.

Happy hunting in the wasteland with all your new shiny gear. Did we miss something? Tell us! All I know is that any raider trying to mess with you will have a hard time with all of this gear.