There are two types of gamers. Some are casual gamers who just want to crank up their gaming consoles for the occasional FIFA session. Then there are gamers like myself who would play for hours at once their favorite game until and unless the end credits roll. We both bring balance to gaming and are essential for the industry to thrive.

However, there is also this rare third breed of gamers, who spend hours nay months overcoming a particular challenge that others like us think to be impossible. Meet Youtuber Many A True Nerd who belong to this group.

The guy runs a series called YOLO (You Only Live Once) and he begun playing Fallout 3 under it eight months ago. A few seasons later, the guy has finally completely the entire game and all its DLCs. And yes, he didn’t heal even once.

The guy overcame Fallout 3’s last hurdle recently which was an assault on the Enclave base – which is part of the Broken Steel DLC pack for the game. His character had 93/560 health on the ‘true health’ bar when he completed the task.

If you’re wondering what that is – as we all know Fallout 3 features health-regeneration so the guy actually put a counter to tally up all the damage he took during the playthrough to keep things as transparent as possible.

The youtuber used some unique tactics to accomplish this insane feat that mostly involved stealth and keeping high health. It’s obvious that Fallout 3 was far harder to beat then New Vegas since the game has random high-level enemy spawns such as Deathclaws, and since he played it on hard mode, it had reduced damage dealing and increased damage intake for the player.

Many A True Nerd seems have made the Fallout series his muse. This isn’t his first crazy Fallout related accomplishment. He has also killed every single enemy in Fallout 3 before (it took 7 months) as well as beat New Vegas with just a single life bar.

You can view the video below that shows his final one hour of playthrough. It’s a treat to watch. 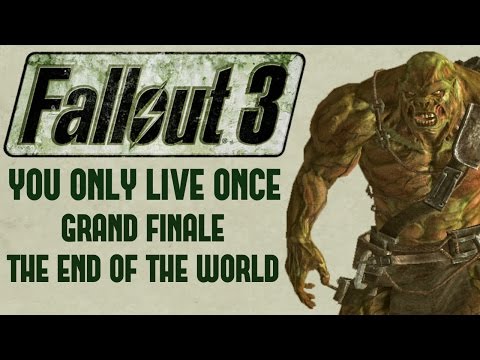