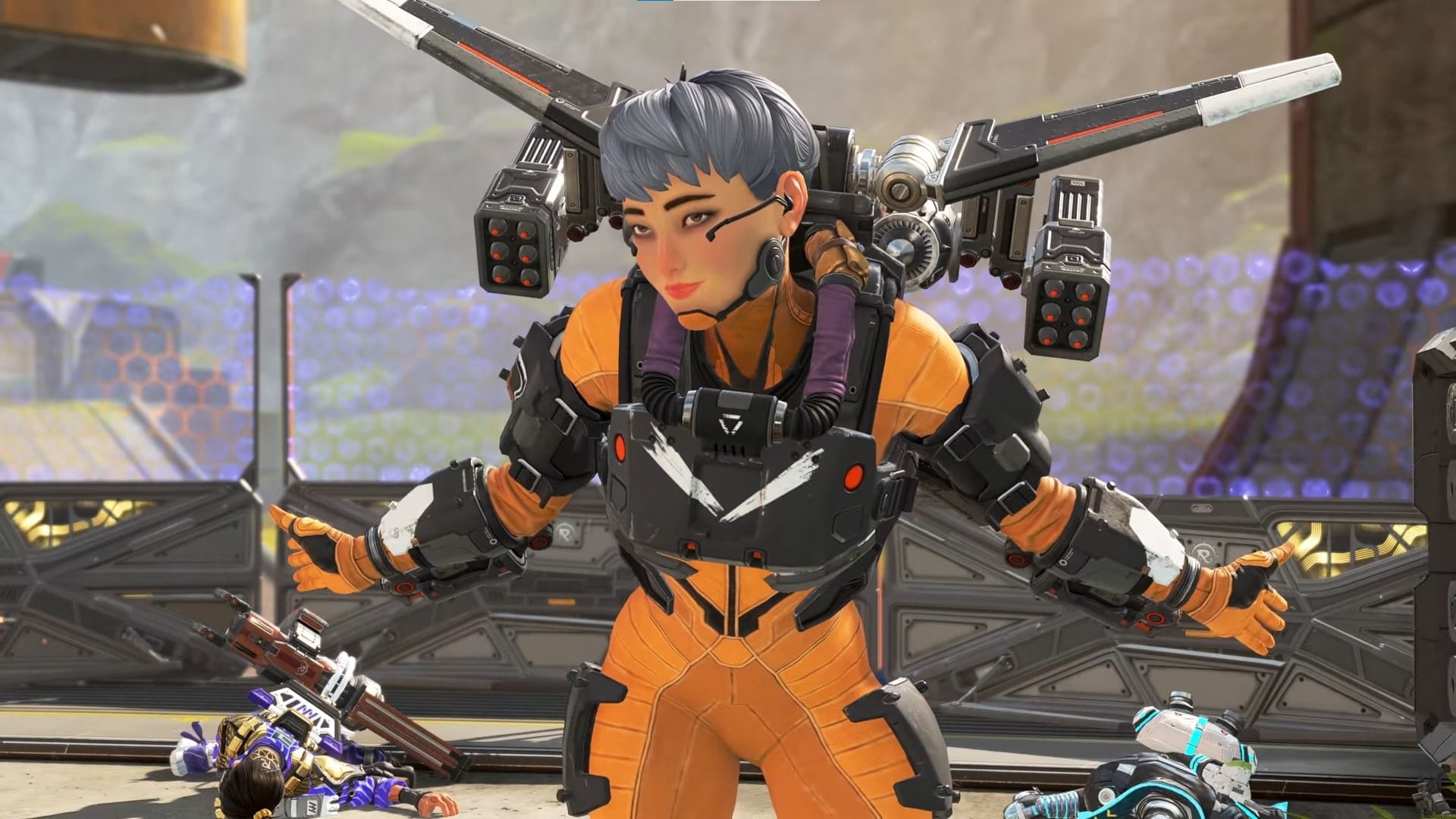 Season 9 is a huge step forward for Apex Legends. It brings an entirely new mode of play with Arenas, updates old maps, and introduces the brand new Bowcek class of weapon.

The poster child of the update, though, is Valkyrie. She’s the latest new Legend to make an appearance in the Apex games with unique abilities and neat ties to one of Respawn’s previous games.

Here’s our guide for everything you need to know about Valkyrie – her backstory, her abilities, and some tips and tricks to get you started.

Kairi ‘Valkyrie’ Imahara is the daughter of a skilled Titan Pilot whose call sign was Viper. Players of Titanfall 2 might recognise the name – Viper featured as a boss in Titanfall 2, jetting about in his flying Northstar Titan.

Viper left his daughter well before the events of Titanfall 2 to embark on a mission with Kuben Blisk. Blisk was a commander in the IMC, the leader of the Apex Predators and creator of the Apex games.

After her father left her, Imahara took the remains of Vipers Northstar Titan and fashioned it into her own VTOL jetpack. She now uses this gadget to compete as an Apex Predator in the Apex games.

Valkyries VTOL Jets serve as a unique movement ability to help her manoeuvre around the map. By pressing the jump button while in mid-air, the jets will kick in, either propelling Valkyrie upwards or letting her hover.

You can strafe in all directions while flying, but it’s not possible to aim a weapon, which leaves her vulnerable to attacks. For this reason, VTOL Jets aren’t intended to be used during combat. Players are expected to use the Jets while exploring, gathering reconnaissance, and while preparing for a fight.

Let’s talk nerdy stats. The jets have enough fuel for a flight time of seven seconds. That doesn’t seem like a long time, but it’s enough to cover some significant height and distance.

Refuelling will begin after a period of eight seconds passes since their last use. They’re not intended to be spammed or used continually. Once the fuel tank is depleted, it’ll take a full ten seconds for the engines to completely refuel.

Another perk of the VTOL jets is that they grant a unique HUD while skydiving. With a stylised altimeter and speed gauge, the jetpack automatically marks enemies within line of sight and 250m of Valkyrie. These pings can be seen by both the player and their squadmates.

Mapped to the Tactical button is Missile Swarm. This ability utilises the shoulder-mounted missile salvos to shoot a barrage of explosions in a given area. Enemies caught in the area of effect will take damage and become severely disoriented.

While it’s not possible to aim with weapons during flight with the VTOL Jets, you can still activate Missile Swarm in the air. When used in combination, you can use the jets to gain a high vantage point and rain down from above.

The rockets don’t do enough damage to kill an enemy outright – you’ll still need to rely on cold, hard bullets for that job. The rocket salvos are instead intended as an enemy deterrent and stun ability.

The cooldown is 30-seconds, so it’s possible to pop off a couple of these abilities if you stay alive long enough.

Another ability that isn’t focused on damage, Valkyries Ultimate allows teams to return to the skies and reposition elsewhere.

Activating the ability will start a charge timer of two seconds, during which Valkyrie won’t be able to move or shoot. Squadmates will need to move close to Valkryie and interact with her to attach on. When the ultimate button is pressed again, Valkyrie and the squad will launch around 180m into the air from where they can dive back to the ground in a different position.

Like the VTOL Jets, this ability leaves the player open to attack, so it’s best not to use this while in the midst of an intense firefight. It’s best used to reposition from a safe location to another or to gain intel on nearby squads. The automatic enemy ping that’s granted from the VTOL Jets also applies while using Skyward Dive.

Think of the ability like a portable Jump Tower. You’ll be catapulted a decent distance into the sky but won’t be able to cross the entire map in one go. Just make sure you’ve got a clear space about you before initiating the launch procedure – unless you want to bang your head.

As a primarily recon-based Legend, Valkyrie shares Bloodhound, Pathfinder, and Crypto’s ability to use Survey Beacons. Dotted around the map, interacting with these control panels will mark the next zone location on your team’s map.

Overall, Valkyrie is a unique addition to the roster of Legends. She serves as an excellent recon support addition to any other damage-based heroes, providing valuable information, decent zoning capabilities, and a jet-out-of-jail free card for when you inevitably get caught out by the zone.

Most importantly, she’s fun to play! Just be sure to use the jetpack in moderation. I just know I’m going to get caught out by it too many times for my liking.

What do you make of Valkyries new abilities? Let us know across our social channels.