The Swapper is a 2D puzzle platformer with a sci-fi edge to it, reminiscent of classic sci-fi atmosphere in games and film. This game was developed and published  by Facepalm Games. Only four people worked on this title, which makes it more impressive.

The Swapper was originally released on the PC a year ago, but now it has received a PS3, PS4, and a PS Vita release. This atmospheric puzzle game asked serious questions and provide fresh and challenging gameplay.

This game is set out in deep space where the player wields a extraordinary device that allows him or her to create and switch consciousness with clones of one self. While using this device, I felt a perplexing issue. As I used my clones to help me progress through the multiple obstacles in the environment, I felt rather guilty. Clones in this game are used as tools; expendable tools. Clones need to die for the player to move forward; this is completely unavoidable. Was I wrong in doing so? The character on screen does not show any emotion, so there is no feedback on the character’s state of mind. Was I committing suicide? Murder? These questions plagued me the entire time I watched a clone meet its end.

The Swapper is a game with great depth and beauty all around. The sound design in game and the wonderful soundtrack helps establish the world you are inhabiting. The lonely ambiance created in The Swapper is quite remarkable. The sound helps establish the mood the game is trying to create. The game immediately gave a eerie and cerebral atmosphere. Early on I felt a vibe reminiscent of Ridley Scott’s “Alien” film. Being completely alone, not knowing what was going on, and the strangeness and suspicious circumstances of the situation gave me feelings of uneasiness and comfortless. The visuals keep the place lonely but still pretty enough to keep the players interest in discovery and exploration. There are many wonderful sets of imagery throughout the game that it makes it great to look at.

The puzzles in the game are challenging but nothing that felt unfair or cheap. Though the puzzles will start out simple, as the game progresses, the difficulty increases. Colored lights make things more complicated and really force the player to use his or her problem solving skills. Red lights do not allow the character to swap consciousness with clones, blue lights do not allow for clones to be created, and purple lights are both the red and blue light combine. As the game moves forward switches, zero gravity, objects, and teleporters are used to keep the game’s puzzles fresh. The puzzles at the end are different enough from the puzzles from the beginning that they don’t overstay their welcome. The puzzles get trickier and trickier and leaves the player with feeling clever after solving them. As some one who does not play much 2D puzzle games, it gave me fits at times, but season players should feel at home with the more challenging puzzles. Unfortunately the game has low replay value; the puzzles are fun but does not provide much reason to go back and play the game again.

The philosophical nature of the game’s narrative may make some people feel that it is a bit pretentious. The game makes the player think, but at times it can be a bit confusing. Without giving away the plot, there are a few quotes that came from the game that made me go “What was that suppose to mean?” Fortunately the story does not hinder the gameplay, it actually makes you think about the way you play.

The Swapper is a extraordinary puzzle game that asked serious questions. The game can be completed in about four hours  but that does not detract from the experience. The gameplay mechanics stay interesting throughout the game as to keep the player engaged. The story can be a bit difficult to understand but it does engage thought. The sound and visuals build up the world and sets the mood for the game. The Swapper provides a great journey from a small indie studio that few AAA games can. 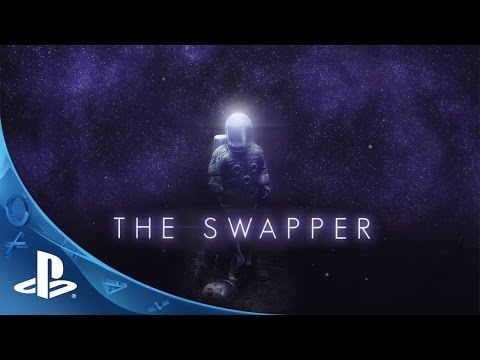 Would you like a copy of The Swapper? We have a copy to giveaway that will work for the PS Vita, PS3 or PS4! This is for UK Consoles Only and all you have to do is simply email psgapply@gmail.com with the subject The Swapper Giveaway.