Bethesda introduced a new crafting mode to the beloved Fallout franchise and since its release, we’ve seen some amazing settlements and creations, this particular one however, really grabbed our attention.

Girl Plays Game devoted her free time in the commonwealth to building BioShock: Infinite’s floating city of Columbia instead finding her son, which to be fair, is probably time spent better.

The settlement (if you could call it just that) is no half-job, it comes complete with multi-level buildings and interiors, both of which can be fully explored. If you would like to take a look for yourself, you can do so here.

It’s a truly beautiful creation, quite possibly one of the best we’ve seen so far in FO4. The accuracy is down to a tee and it doesn’t take a genius to take an educated guess of how long this must have taken. For the record, it’s probably a hell of a lot.

Of course, a number of mods were used in the making of this masterpiece but nearly all of the objects used are vanilla FO4 materials. All of the mods used are mentioned on her website, along with a majority of other interesting Fallout posts.

The settlement itself has even caught the eye of one of the developers, as he retweeted the original tweet regarding the settlement. This truly speaks volumes on how Girl Plays Game has utilised the tools of Fallout 4 and how great the outcome is.

As mentioned before, this is a new system in the Fallout franchise and it is (usually) used for creating barely sustainable settlements for survivors. I must have missed something in the tutorial, half of my settlements consist of a wooden shack, seven sleep bags, a short supply of Tatos and the haunting knowledge that a small raider attack would crush my rather petite group of survivors.

However, great creations using the Fallout crafting system are not something we’re new to. For example, prior to the release of the most recent Star Wars movie, one player actually built a life-sized AT-AT in the Commonwealth, complete with a living quarters inside! If you missed that, you can read about it here.

How far does your creativity go in the wastelands of Fallout 4? For me, it would be the previously mentioned wooden shack, complete with a basketball hoop in the bathroom. I like to call it the dunk and dump room.

Check out the video below featuring this amazing creation – 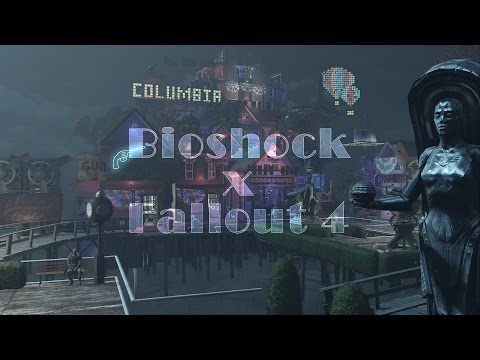