With Destiny: Rise of Iron round the corner, a hidden room has been found in the game by some of the hardworking fans. The news comes a couple of days after Bungie announced the weapon rebalancing Update 2.4.0.

The secret room has been found underneath the Dust Palace on Mars. We can almost be certain that this new room would be a part of a mission or a quest in the upcoming expansion. Currently, a Dead Ghost can be collected in order to get a new item called Dormant SIVA Cluster in the room

Reddit user esoterickk has also posted the directions to get into the room in Destiny sub-reddit.

To get to this room, you need to load up the Tenebrous Tunnel mission and head back to the Dust Palace Strike, running all the way up the tower to Psion Flayers / The Cortex. Once you’re up here and have loaded the zone, turn around and run down to the Dust Palace zone (the second room of enemies in the strike with the elevator in the middle). Go to the ground floor and crouch in the gap on the floor, and let the enemies kill you. Once the enemies kill you, you will respawn inside of the hidden room under the strike.

A video of how the glitch to get inside the room works was also posted by esoterickk: 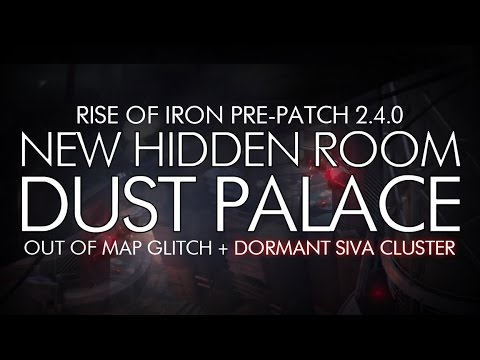 Previously Bungie mentioned that the some of the contents of the upcoming DLC were preloaded with the Update 2.4.0. So, we can easily assume that this hidden room is also a part of Rise of Iron.

You will be awarded 5 Grimoire points when you collect the Dead Ghost but more details about the SIVA Dormant Clusters are unknown yet.

However, it is advisable that you should wait for the official release of Rise of Iron to pick the items as some players had faced disruption in the past when they activated items before the launch of the content.

Destiny: Rise of Iron is scheduled to launch on September 20th on PS4 and Xbox One.