Ubisoft has released a new TV advertisement for their upcoming Far Cry 4 video game title. The new commercial shows off more of the environments like the snowy mountains along with the different enemies both human and animal predators that lurk within the lush areas. Also noted in the commercial is a few pre-order bonuses.

For those who pre-order Far Cry 4, Ubisoft will provide extra story missions and an impaler harpoon gun. Far Cry 4 puts players into the role of Ajay Ghale who is visiting Kyrat, a location within the Himalayas. During the visit he is captured by a self-appointed king, Pagan Min.

Currently the game is set to release this November 18, 2014 in North America with other regions receiving the game on November 20, 2014. Far Cry 4 will be available for PlayStation 4, PlayStation 3, Xbox One, Xbox 360 and PC. 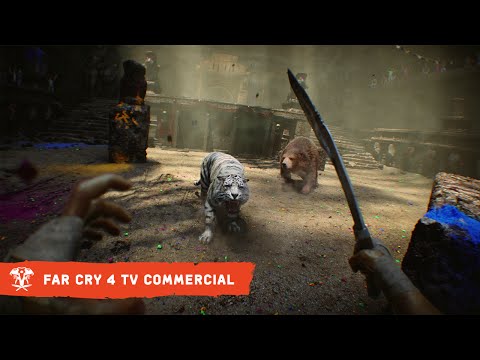