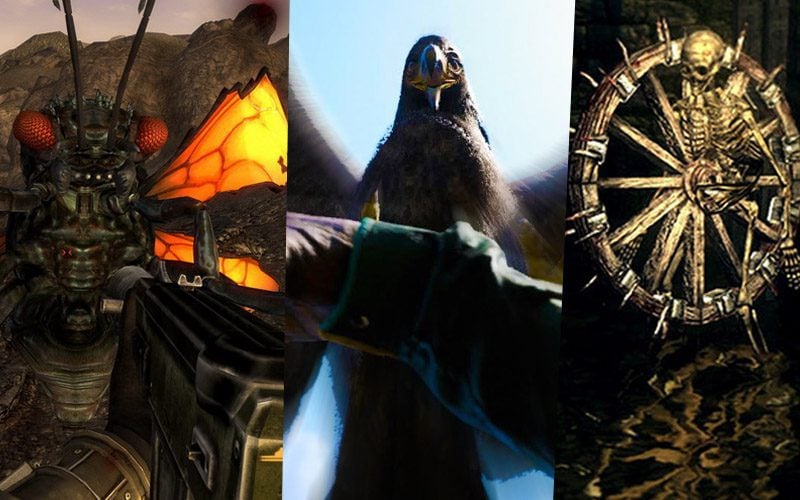 There’s nothing better than getting home from work or school, kicking your feet up and loading the save game file of your favorite game. You leave your own world and problems behind and immerse yourself in another, but there’s always someone to ruin your day.

We take a look at some of the most annoying enemies to have graced videogames who made sure that they manage to not only annoy you but make your ability to progress in the game near impossible.

Kicking off the list, drones (or buggers) aren’t exactly formidable opponents, they’re cursed with low health and no shield meaning one well placed shot will end them, what makes them infuriating is their power of flight and speed.

What they lack in power and stature, they make up for in their dodging abilities, making trusty frag grenades a no go. Deadly in numbers, the drones make quick work of your shield on harder difficulties, serving as minions to whittle your shield down while you focus on the bigger guys, or keeping you pinned while a chieftain flanks you with a gravity hammer.

There’s no gracious way to beat drones, either spam them with an automatic weapon or keep a precision weapon near and pop a headshot when possible.

Around 80% of my playthrough(s) of Payday 2 consisted of me yelling ‘Sam Fisher!’ while these guys ninja kicked me from the shadows, apparently they’re named Cloakers. A fitting name.

So these guys are here for one reason only, to ruin your day. A bit like the witch from L4D, a Cloaker will lie in wait for the opportune moment to attack, be it hiding near the drill or near your exit, one hit from a Cloaker will floor you and his onslaught of attacks while you’re crying on the floor prevents you from attacking him or any other resistance.

The only way to anticipate a Cloaker attack, if you haven’t caught him out dropping from a grate that is, is a creepy audio cue that lets you know he’s locked on and coming for you that gets progressively louder the closer he gets.

It’s annoying but well executed, the sheer panic and fear Cloakers put into you can change a the ebb and flow of the game, changing your tactics from aggressive to cautious and giving the police a chance to swarm you.

We all know Minecraft, which unfortunately means we all know Creepers. Again an enemy that is there just to infuriate you, the creeper will make short work of you and any creation in its blast radius.

They come from nowhere, almost seeming like they teleport into your vicinity, Creepers have claimed many lives of the unsuspecting, players stopping for five seconds to check the map, arrange their inventory, people building structures, the familiar hiss followed by the eardrum blowing boom is its way of saying ‘get that goddamn mud hut off my land scrub’.

This isn’t the first and it certainly won’t be the last time you’ve read an article on annoying enemies and Zubat makes the list, if not tops it.

Imagine this, there’s you, going about your own business, shopping, eating, hanging out with friends trying to enjoy yourself but everytime you take five steps some guy just wants to fight you. Some bratty nine year old, lets say. It’s small, pointless and a waste of your energy so you don’t do anything, just walk away. After one too many ‘your mom’ insults, you turn around to impose your age and authority by putting a flea in his ear and giving him what he wanted and probably deserved.

You start with logical arguments that would make sense to anyone else, but you keep getting peppered with childish insults and ‘why you keep hitting yourself’. That’s pretty much fighting a Zubat, you can use your powerful Pokemon against it and ultimately win, but inside you’ve lost. Broken, embarrassed and raging because you’ve most likely ran into another one.

Another enemy that isn’t ‘deadly’ as such, the eagles can turn you from hero to laying-in-a-puddle-of-tears in just one swoop.

It doesn’t matter what you’re doing, who you’re saving or which enemy settlement you’re destroying, the eagle makes it a personal mission to stop you. When Far Cry 3 was released, I was terrified of swimming due to a few surprise attacks from crocodiles, it sounds stupid yet I never fully recovered, but that was okay, I could avoid water if I wanted to or swiftly scout the lake before jumping in. The eagles, not gonna happen that way. Good luck avoiding the sky guys.

These ‘birds’ (only putting that in quotation marks because I don’t believe for a second they aren’t some Skynet manufactured terminator bird), will claw at you from above, putting a huge dent in your health and making you duck for cover to heal. That or they can briefly pick you up and drop you, so stay away from cliffs too.

Just nightmares. Poison headcrabs are the reason you don’t go to Ravenholm.

Like the concept of a headcrab wasn’t terrifying enough, a small alien creature that latches onto your head and mates(?) with it, turning you into a zombie, it wasn’t good enough for valve. They had to step it up, giving the bearable traditional headcrab a re-skin, making them black and giving them longer legs. Shivering as I type this.

What defines poison headcrabs from, for example, a fast headcrab, equally creepy less annoying, is that the poison headcrab will reduce your health to 1%, making you a one hit kill for anything. Not to mention that there’s a zombie that actually carries three or so of these parasites and flings them at you.

If you hear the distinctive snarls of a poison headcrab, get your shotgun out and focus fire on them first otherwise it’s a 10+ second wait for your suit to administer meds.

These guys, if you’ve ever had the pleasure to explore too deep into The Catacombs or Painted world of Ariamis, you’ll know these guys well.

Firstly, why are they in a wheel? Not only are these guys capable of singlehandedly taking out even the strongest of builds, they look damn stupid. It must make for a tactical advantage though as apparently a wheel is the strongest weapon in the game. Gloriously overpowered, the wheel skeletons will roll towards you at high speed, their attacks almost unblockable as the fast nature of a spinning wheel drains your stamina, eventually staggering you and leaving you open to an onslaught.

The icing on the cake is the fact they always show up in numbers, meaning you have to either separate one from the rest and take them out in order, or jump into the middle and hope that your armor won’t weigh you down too much. Even this strategy takes up a lot of time as your attacks must be very precise. Cheers FromSoftware

Fallout: New Vegas has a lot of tough enemies but nothing even comes close to the Cazador on the annoyance metre. These flying devils are quick to wreck you and would leave no stone unturned in order to do so. What’s worse, they won’t take any extra damage even if you headshot them. And god forbid these guys appear in groups, if you know pain and terror, you’ll know to run than face them head on.

The best way to deal with these bitches is to aim for the wings and if you’re brave enough to face a group of these flying imbeciles than make sure you’ve plenty of anti-venom and are leveled up to the point where no fight is tough enough for you.

Did we miss any annoying enemies that gave you a hard time? Let us know in the comments so we can feed off your demise.