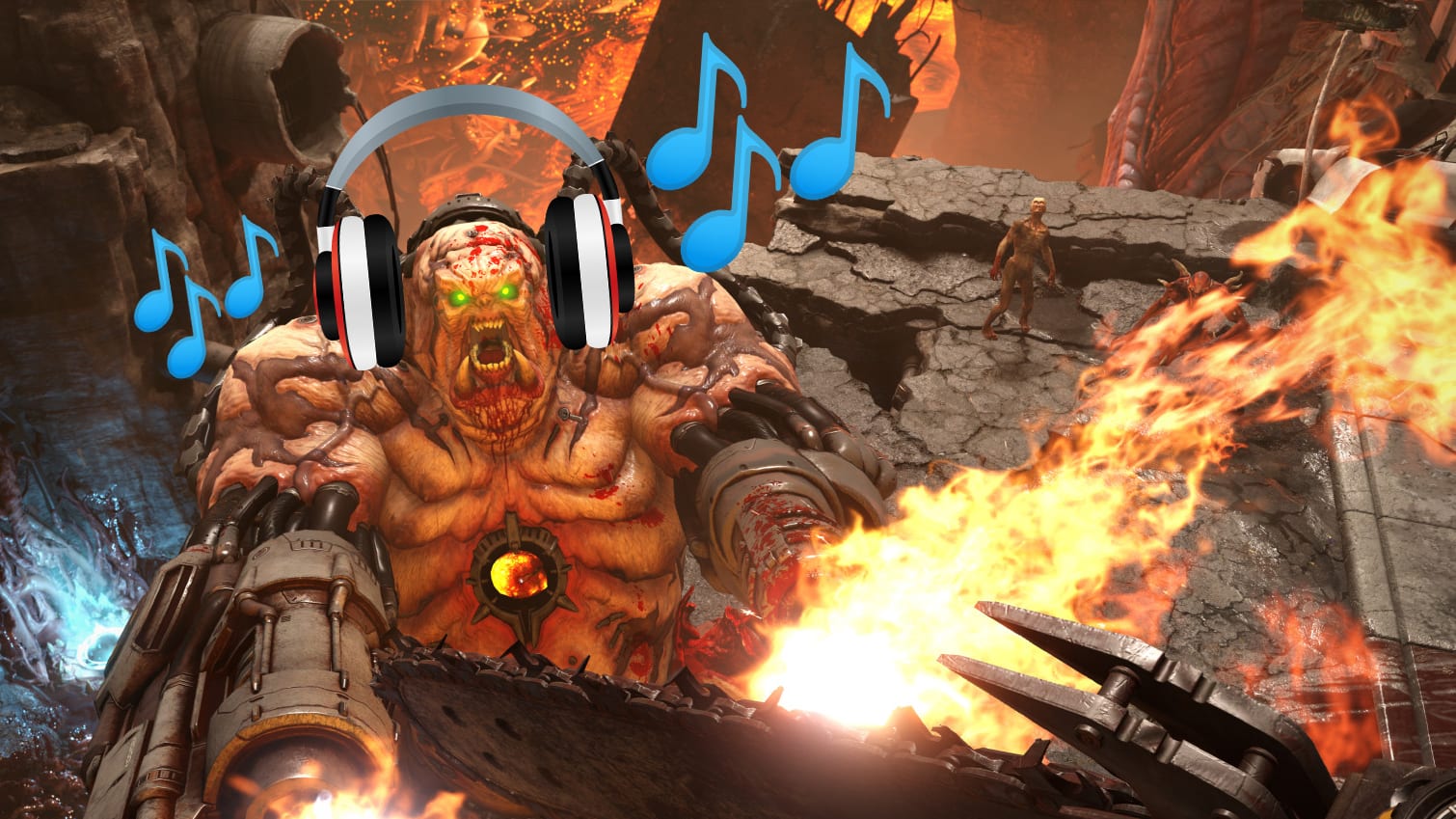 Oftentimes, the difference between a good game and a great game is the soundtrack. Earning a victory royale, popping heads, defeating the end boss – all are satisfying accomplishments. But those moments just aren’t as satisfying without epic gaming soundtracks to support them.

Luckily for us gamers, the games industry is filled with talented composers. The best of the best are capable of defining much of our nostalgia fuelled memories. Everyone no doubt has a gaming memory that is synonymous with a particular music track.

Besides an emotional response, soundtracks in action games have the unique role of getting us pumped up with adrenaline. That can be a tricky job for even the most experienced of composers.

Here’s a roundup of five epic gaming soundtracks that will instantly hype you up, no matter the occasion.

The DOOM (2016) OST is a crowning achievement for shooters. An entire album filled with wall-to-wall bangers that require absolutely zero skips. It’s composer Mick Gordon at the top of his game.

Even if your preference isn’t particularly attuned to heavy metal rock, there’s a lot here to appreciate. Personally, I was never a fan of this heavier style of music prior to playing DOOM in 2016. Surprisingly, it ended up being the soundtrack to carry me through a bunch of A-Level revision and played a good hand in kickstarting my fitness journey.

The sequel to DOOM (2016), DOOM Eternal, has a soundtrack that’s on par, potentially better than its predecessor. This time around, Gordon enlisted the service of a heavy metal choir to really bring the tracks to life with guttural yelling. It’s chilling stuff.

Unfortunately, it’s unlikely that we’ll ever get a complete OST from DOOM Eternal published on streaming platforms. Due to some misunderstandings between developer id Software and composer Mick Gordon, the two parted ways shortly after the release of Eternal.

At the time, those who purchased the Deluxe Edition of DOOM Eternal received a copy of the OST. Bethesda promised that the album would release on streaming platforms in the coming weeks, but a whole year later and we’re still left waiting.

For now, listening to the tracks on YouTube and SoundCloud will have to suffice. “The Only Thing They Fear Is You” is an absolute banger that makes me feel like I could run a marathon twice over (I definitely can’t).

The epic soundtrack to Battlefield 4 still gives me chills to this day. DICE is synonymous with excellent sound design in many respects, not least for their work in creating incredible war soundscapes. But their crowning achievement has to be the Battlefield 4 Multiplayer Launch trailer.

A low synth builds throughout the first half of the video, showcasing some fairly standard action for a Battlefield game via mostly third-person shots. Then it all cuts to silence as a soldier surfs an ATV off the top of a collapsing skyscraper. The camera changes to the first person as they land in the water. A sly cut has the map transition as they resurface. A friendly jet ski passes by, the enemy on their tail. With the swift placement of a C4, the player blows them sky high and the full force of the Battlefield theme kicks in.

What follows is a collection of moments only possible in a Battlefield game. All-out vehicular warfare, vigorous tussling for capture points in the heat of heavy firefights. The epic visuals combine with an electronic theme serve to encapsulate everything that makes Battlefield great. Safe to say, it knocked my and 3,539,000 other’s socks off.

Clearly, it’s not just me who’s a fan of composers Johan Skugge and Jukka Rintamäki. Their work on the Battlefield soundtracks has also been used in other media properties, most notably Netflix’s Formula 1 documentary show, Drive to Survive.

In an episode exploring a race in Baku, the track used in the BF4 mission ‘Fishing in Baku’ can be heard. Battlefield 3 tracks from Operation 925 and Markaz Monolith also make an appearance in other episodes.

Here’s hoping for some even more belter tracks in the Battlefield 6 soundtrack!

Despite the untimely demise of the game itself, Lawbreakers had an absolutely killer soundtrack. That’s thanks, in part, to a star-studded cast of composers. Mick Gordon makes another appearance here with a few tracks that share unsurprising similarities to his work on DOOM. There’s also Jaroslav Beck, who I’ll introduce you to shortly.

Each of the tracks is rooted in synth and some heavy metal, while others are allowed to breathe with a little more orchestral flair. They combine to create an OST that’s varied and exciting to listen to.

While not quite as high-key as some of the other OSTs on this list, I bet that there’s a good few tracks on here that’ll power you through that final set at the gym. I’d recommend starting out with Mick Gordon’s tracks on the album and branch out from there.

As one of VR’s most purchased games, Beat Saber was bound to appear on this list sooner or later. The action rhythm game features a stunning set of adrenaline-fueled tracks because that’s essentially the game’s selling point. Who hasn’t wanted to feel like a Jedi versed in the art of Dance Dance Revolution?

Like Lawbreakers, Beat Saber has something here for everyone. Fans of more melodic dance music will enjoy tracks like ‘Escape (ft. Summer Haze)’ where those who prefer heavier rock vibes have ‘Lvl Insane’ to play with.

Of course, the best way to experience these tracks is to ‘play’ them yourself in Beat Saber. Once you’ve got a feel for the beat of each song, you’ll begin to feel unstoppable, even when you listen to the tracks outside of the game.

Nothing since the years of Guitar Hero and Rock Band has connected players with music in quite the same way that Beat Saber has managed. For that reason, composer Jaroslav Beck and the team at Beat Games deserve utmost credit.

Warframe seems to keep chugging along quietly in the background. As other live service games like Warzone make a big song and dance about every new update, the Warframe fanbase seems fairly content in its own little pocket of the gaming sphere.

It’s a shame that the game so often goes unnoticed because its soundtrack is exceptional. Composed by Keith Power, the orchestral soundscape illustrates the space epic in a wonderful light. Certain tracks capture the wonder that you’d expect in exploring a distant universe, while others invoke the impending sense of doom that arrives with facing off against alien species.

To get a good sense of breadth in the Warframe OST, start out with the inaugural track ‘This Is What You Are’. For something a little more adrenaline-inducing, try ‘March of the Moa’.

Other highlights include ‘We All Lift Together’ which has more of an emotional impact if you play the game and understand the context in which the track is played. It occurs early on, too, so you won’t have too much to play to experience it.

What are some of your favourite epic game soundtracks that get your blood pumping? Let us know across our social channels.