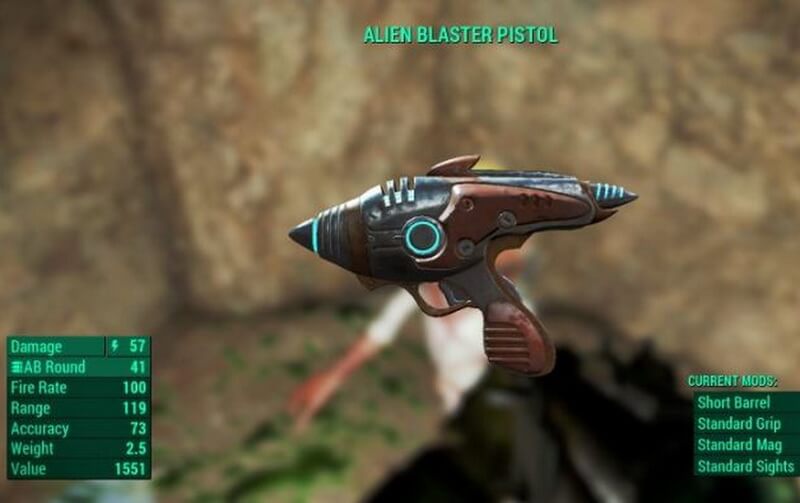 Fear no more, for we are here to guide you in your search for the best weapons. There will obviously be some spoilers as.. well.. we’re telling you where the weapons are.

You can buy it from Vault 81’s vendor, Alexis Combes. It’s a pretty penny, so be sure to bring plenty of bargaining tools.

Alright, so what’s better than a fully automatic tommy gun? Well, one with explosive bullets of course. That’s exactly what you get with this thing, which really has it living up to its name.

We advise not spraying too close to yourself though.. Oh, and the gun logically makes no sense since you load the same rounds into it as any other gun of the same caliber, so they really shouldn’t be exploding.. NOT THE POINT THOUGH, IT’S SICK!

You can buy the gun from Cricket, a wandering caravan trader. Again.. probably a decent dime, might want to stock up on some cigarettes to sell.

Okay, maybe this one isn’t very over powered, but the feeling you get using it is. Just think, this is the same .44 magnum which was used to kill your spouse back in Vault 111. What a trip! Now, if you’re sick like me, you’ll use this gun to kill someone else too, *wink wink*.

It goes without saying, but you can pry this pistol from the hands of Kellogg himself.

Despite it’s rather tiny size, this pocket pistol packs a punch. In addition to it’s punch, it’s fire rate is ridiculous and some may say should be nerfed in an update. I’ve fully beaten the game and I’m level 60, yet I find myself using this as my primary weapon most of the time.

The Deliverer is a potential reward for completing Tradecraft. Read more about it here.

Of course, of course. The Alien Blaster is just as good as it was in Fallout 3. Being a piece of alien tech, it makes sense though. I also love how they altered its appearance to account for people modding it. But wait.. how can you mod alien weaponry with an alarm clock? Eh, logistics.

The Alien Blaster is found in a random encounter. Read more about it here.

These are our picks. If you think we missed some neat weapons, make yourself heard in the comments below.