Rockstar Games couldn’t have had a bigger hit on its hands than Red Dead Redemption 2 (apart from maybe Grand Theft Auto 5, but give it time) and pretty much everyone in the world is playing it right now.

Rockstar is well-known for its realistic worlds, attention to detail and fun as f*ck gameplay, but you may have noticed a lack of famous names attached to its projects as of late…

The likes of mega-stars such as Samuel L Jackson, Burt Reynolds, and Dennis Hopper have each lent their skills to previous Rockstar games, but don’t expect to see (or hear) them any appearing in any future titles.

Speaking to Vulture, Rockstar co-founder Dan Houser mentioned there’s a couple of reasons why, stating: “we don’t bring in name actors anymore because of their egos and, most important of all, because we believe we get a better sense of immersion using talented actors whose voices you don’t recognize.”

It’s a valid point, since hearing a voice you recognise really can pull you out of the moment – something which Rockstar seems to be strongly against.

Red Dead Redemption 2 has been praised for its unbelievably immersive gameplay, with outstanding attention to detail and pretty much endless missions and sidequests to occupy your time.

Everything from the length of your beard hair to the clothing you wear can be changed – with each change having an affect on the gameplay.

In colder environments its important to dress warmly so as not to lower your health, but make sure to drop the layers when it comes to the warmer regions!

Since launch, players have discovered hundreds of secrets, glitches and Easter eggs already, and it’s a safe bet to assume there’s still a lot more to find.

One of the best cheeky Easter eggs left by Rockstar is the inclusion of the infamous Donkey Lady. Donkey Lady was the NPC in the first Red Dead Redemption game, who – thanks to ones of the best glitches in gaming – featured the face of a donkey and was rideable. 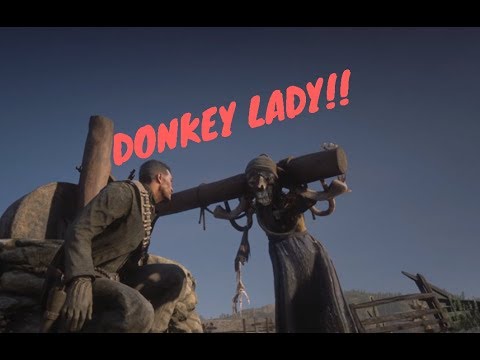 YouTuber Bubski uploaded a short video which shows a deceased Donkey Lady in RDR2 – wearing the same outfit and still featuring her iconic donkey head – though unfortunately not rideable.

Have you been playing RDR2?