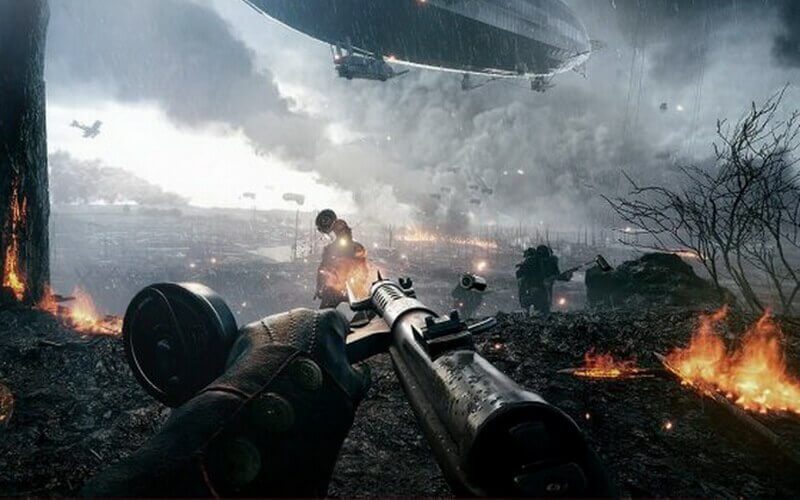 All maps in Battlefield 1 have dynamic weather which adds to the realism of the game. However, many users have reported experiencing different weather patterns while playing together on the same map in the multiplayer mode of the BF1 beta, leading a redditor to speculate that Battlefield 1‘s weather system is client side, not server based. This means that the weather is determined on your local system and not on the BF1 servers. So while you’re experiencing a dust storm, it can be clear skies for your teammate standing right next you.

The lack of uniformity in weather can cause some issues where the visibility of the gameplay is affected, potentially giving one player an advantage over another. One redditor commented, “I was wondering why I was getting headshot by snipers in the middle of a blinding desert storm while I was crouched behind rocks. Mystery Solved.” Right now we are receiving varying reports regarding whether or not opposing teams experience the same weather in the Beta; some are saying it might just be a bug.

From the developer: Dense fog, for instance, limits your vision. This makes it harder for snipers to be effective from afar and changes the spotting distance. With heavy fog, an open map can turn into a melee, close-quarter experience for a limited time. People will need to pull out their bayonets, equip themselves with shotguns, and get ready for more intimate affairs until the fog dissipates.

Rain doesn’t change how far you can see, but it can distract and distort your sight. You always look for movement when you’re scanning the horizon for threats, but rain pouring down makes this much more difficult. This change in vision changes how you’ll approach flying, too. Since visibility is affected, the rain pushes you to become more cautious when flying close to mountains or the ground.

Extreme weather, like the sandstorm that can kick up in maps like Sinai Desert, do more than just limit your vision. Its density makes it difficult to fly, more or less grounding any planes in the sky. That’s not to say that you won’t be able to learn to compensate, however – really skilled players who know the map could try taking to the skies and use their low visibility as a tactic.

Weather impacts just about everything in the game. Raindrops are visible on the weapons, birds go away when the wind picks up, the audio changes during a sandstorm. Like so much else in Battlefield 1, we wanted to make sure weather makes the player immersed with the world, both visually and thematically. The western front has more heavy rain, and we make sure the fog in the trench wars has more density, and feels close to the ground. Up in the Alps in the Italian campaign, there’s a sense of low fog in the valley, and if you move up to the mountain tops you get rid of the fog. You can even see the fog below you.

Dynamic weather gives flavor to specific matches, creating unforgettable moments that feel more unique – more personal. Even after multiple matches, you will encounter a combination of weather, location and gameplay you’ve never experienced before, with a new dimension to your Battlefield moments.