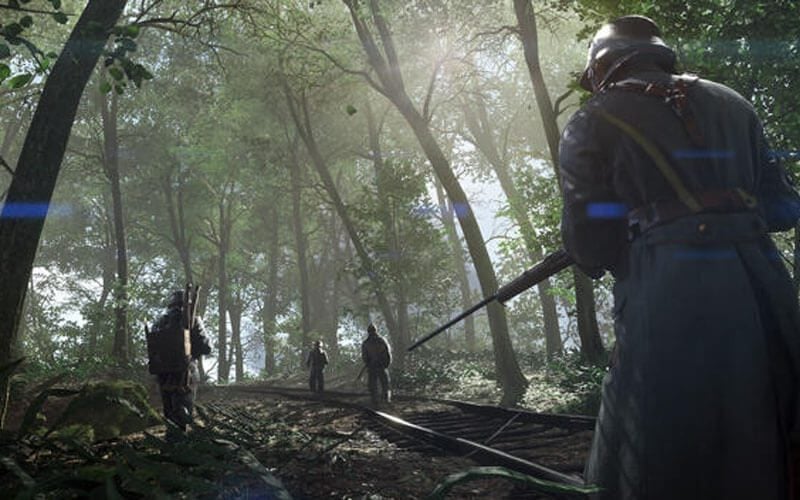 Battlefield 1 is gearing up for a big launch on October 21st and Electronic Arts has begun to roll out more detailed information about the game. Just yesterday, they revealed Battlefield 1’s PC System Requirements. Now today, they dropped the big one, all of the Battlefield 1 Maps and Modes. DICE has also mentioned that they are listening to player feedback and making modifications to vehicle balancing, conquest scoring, and rush. The final game should get rid of most of the bugs like the unfair conditions created by the dynamic weather mode.

There will be 10 official maps in the game, including Sinai which everyone has already played in the beta.

Join the final offensives along the Meuse River in 1918. Here, fierce fighting in trench lines is quickly replaced by the untouched beauty beyond hell. A massive French chateau, previously home to officers beyond the rear lines, is now the scene for a battle with both tanks and flamethrowers. The chandeliers are shaking from the barrage as the American forces push for the final railway hub at the edge of this map.

The shadowy depths of the Argonne forest is the scene for some of the most brutal close quarter combat in Battlefield 1. The world inside this forest features devious defensive setups combined with a labyrinth of bunkers and machine gun nests. Camouflaged field guns firing at point blank range, Stormtroopers clearing out bunkers with gas, and the best use of sharpened spades will determine who owns the depths of this forest. Heroes are forged surviving the intensity of this infantry focused map.

Join one of the earliest amphibious landings of the Great War as the British Empire struggles to secure the oil on the Al-Faw Peninsula. The majestic Ottoman fortress of Fao guards the entrance and is not falling uncontested. Here you will fight through marshlands and dunes, over bridges and shallow coves. The assault finally enters the ancient fortress itself. The quest for oil begins here. The Dreadnought needs to feed.

A struggle for the most vital supply line of World War I. Even though it was considered impossible, the Ottomans crossed the desert of Sinai and threatened the canal. Join the fight by the banks of the grand canal and make tactical use of the dunes. Fight through shallow defenses, with field guns or mortars, through the outskirts of Kantara and into the deep desert beyond.

A massive attack on the scarred battlefields of northern France. As part of the Kaiser’s battle, the German army throws everything they have to try to break through the British lines. Prepare for truly cataclysmic assaults as you push through the trenches of the St. Quentin Scar. Be the first soldier to break through the fortified lines and assault the pristine village of Travecy, untouched by the war… until now.

Engage in all-out war in Sinai Desert, a scorching hot battlefield located just East of El-Jifar. From infantry skirmishes in the narrow streets of the village of Bir el Mazar to dogfights above the majestic cliffs, you’ll need to make tactical use of the dunes as you engage in explosive battles. When all hope is lost, reinforcements will arrive in the shape of a powerful Behemoth: a deadly Armored Train charging through the desert sands.

A destructive clash in a majestic city. Fight on the streets and squares in French city of Amiens during the German spring offensive. A struggle in crumbling alleys, a courthouse, around bridges and railways where the British and the Germans desperately seek to control the depths of the city.

Take part in one of the final battles among the peaks of kings in the Venetian Alps. High up above the clouds a desperate fight for control of mountain forts are challenging even the toughest soldiers. Utilize the massive fort cannons to stop the advancing enemies as they scale the mountainside. Up here, in this furious struggle, the Austro Hungarian Empire holds the upper hand, but the Italian Army won’t stop until they’ve taken back what’s theirs.

Along the Adriatic coast a fierce struggle for land and life is taking place. A rugged but fortified shore becomes the battlefield for an empire under siege. What was once a beautiful Mediterranean village by the coast is now transformed by mechanized war, where waves and dreadnought battleships pound the remains of Italy’s Great War.

GIANT’S SHADOW: Prepare to take part in the Battle of the Selle in the cold autumn of 1918. Here, the fighting moves out of the trenches and into open country where a massive crashed airship casts its shadow onto the battlefield. The British forces have broken through the Hindenburg line and are now in pursuit towards an important railway center. Fierce infantry and tank engagements ensue on the open ground and river banks alongside the Cateu-Wassigny railway where an armored train can still turn the tide. Giant’s Shadow will be coming to Battlefield 1 as part of a free update in December.

On the official website it says to check back later for more, so we assume new maps are coming.

Now in term’s of gameplay modes, here’s what we got:

Conquest
An all-time fan favorite of Battlefield players, Conquest is a large-scale game mode with up to 64 players fighting for the control of key objectives. With large armies on foot or behind the wheel and the addition of fearsome Behemoths, Conquest brings together all the elements of the signature Battlefield all-out war.

Domination
Domination offers a fast-paced infantry focused combat in close quarter locations. It’s a smaller, but more focused version of Conquest, and the fighting revolves around strategic objectives. Ready your shotgun and sharpen your hatchet–in the Domination game mode things tend to get close and personal.

Operations
Operations offer epic journeys across several maps based upon real battles of World War I. We wanted to offer a large and epic experience with a focus on teamplay and frontline combat. Adding this meta-layer to the game mode, and stretching it across multiple interesting locations that both look and play very differently, adds a whole new layer of scale and variety to the battles in Battlefield 1. Your team can win on one map, proceed to the next map, and actually see the map you previously fought over on the horizon.

War Pigeons
During the Great War, man-made communication systems were still crude and unreliable, so dogs and pigeons were used extensively to carry messages. In the War Pigeons game mode the opposing sides compete to use messenger pigeons to call in artillery barrages on the enemy. When the game starts, a pigeon coop with a messenger pigeon is placed somewhere on the map. Locate the pigeon before the enemy and carry it to a safe location out in the open. There you prepare a message and send it off, calling for artillery support. Once a message is successfully sent an artillery barrage will strike the enemy.

Team Deathmatch
In many ways World War I changed the notion of how war was fought, but the end goal was still to inflict as much damage as possible to force the enemy to surrender. Team Deathmatch hones in on the brutal simplicity of infantry warfare: kill or be killed. This mode pits your side against the enemy and you need to defeat as many enemies as possible while protecting yourself and your team mates. At regular intervals a powerful Elite Class weapon is dropped somewhere on the map. Grab it to get the upper hand in terms of firepower. The winning side is the one that inflicts the most casualties to the enemy. If the timer runs out, the team that has killed the most enemies win.