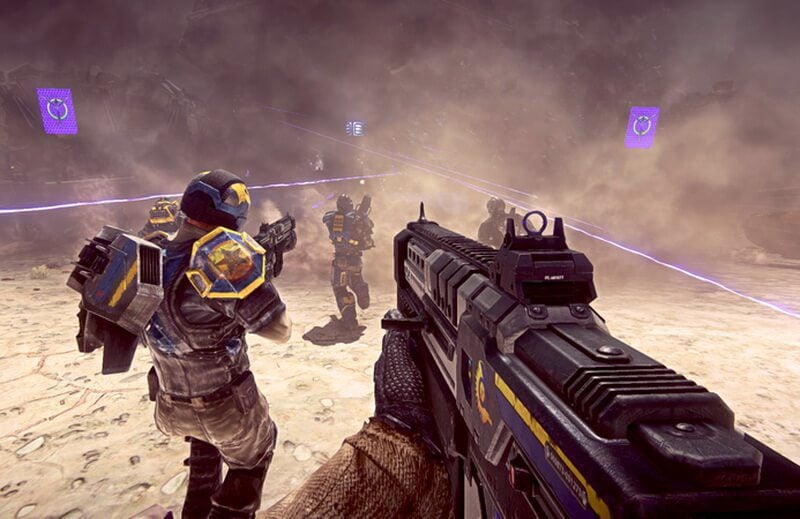 Complaints and small issues in games are common place these days – freezing, often hilarious or annoying glitches prevent us from really getting along with the game and putting it in our ‘favourites’ collection, regardless of how good it has the potential to be. The following games suffered from just that and more – they were simply unplayable on release date.

Visually stunning, Planetside 2 is an MMO designed to quite literally allow hundreds of players to join in, which sounds awesome right? The theory of it was good, everybody playing online and having a good time is a great idea in theory – only having a good time was almost impossible on the PC version.

The problem with it was that upon release most computers simply couldn’t handle the game, often running at just 10-30 frames per second which was just simply not good enough. It was eventually patched and fixed, but it’s more than likely that a lot of players had lost their patience with the game, which is a deep shame for something that had so much potential.

Bethesda have an ever so slight reputation for trying to be far too ambitious with their games, let’s be honest. Although they are, or could be a lot of fun from the get go, they tend to have many irritating problems. Players of Fallout: New Vegas were no exception to this, as the game often had many annoying glitches and bugs – often literally ruining your progress.

New Vegas suffered from a horrible bug which would often corrupt your save files, meaning if you were unlucky enough, you had to start all over again. It isn’t the first time Bethesda have failed to properly test their games before release, and the chances are it won’t be the last from the ever ambitious, but brilliant company.

If you’ve played Battlefield (If you haven’t, please do), you’ll know that although it has a fairly decent campaign mode it is based mostly around its multiplayer mode. Battlefield 4 in itself was good, very good, but then I’m a Battlefield guy. The problems with Battlefield 4 weren’t necessarily with the game itself, in fact, they all stemmed from a rushed, even a poorly prepared release.

Sadly for gamers this isn’t the first time EA have been at fault. It’s hard to disagree that they have taken part in some massive titles, it’s easy to agree that quite frankly, their servers are crap, like terrible. It’s because of EA that this game makes this list. I couldn’t get online for so long that I quite literally just gave up on playing for a while until they fixed it a few months later. Not cool guys, not cool.

Another Bethesda title makes the list. Surprised? Of course you aren’t, and you probably aren’t overly amazed to see the gaming brute that is Skyrim. Skyrim suffered from some similar problems to Fallout: New Vegas, unless you absolutely blitzed it you probably lost half of your save data with the files quite often corrupting or breaking up, or worst case scenario, you literally couldn’t complete the game.

On top of that, Skyrim suffered from some sloppy release habits and some irritating visual glitches such as any light source flickering in bright white, even the starting screen fog flashing red and green – which is highly annoying to say the least.

The original release of Final Fantasy 14 was so terrible it was quite literally remade. The developers gave it a graphic upgrade, a new combat system and even a whole new story line. A lot of players now claim it as one of the best games of its type – quite a large accolade considering the competition. The Final Fantasy realm had been amazingly reborn. I’ll get my coat.

Batman’s Arkham series is impressive, there is no doubt about it. The games have been called a lot of things over the years – but unplayable? Many games suffer with being cross platform, and sadly the Dark Knight’s powers were not enough to save him from making this list.

Arkham Knight worked perfectly on next gen consoles, but it seems the world of PC gaming just simply wasn’t ready for it, suffering from extreme performance problems. Not only that, it seemed to be universally locked to 30 frames per second – regardless of whether or not your PC was capable of doing more. The PC issues were so terrible that Warner Brothers actually pulled the game before it’s intended release, much to the displeasure of eagerly anticipating gamers.

Sim City has been around as long as I can remember, probably as long as you remember as well. It was a simple game, you make a city, you let an alien attack it and then you build it again. After all, we all dream of playing “god” at some stage in our life right? So what could possibly have been so terrible about Sim City? How could you possibly get it wrong? Got an answer for us, EA?

Yup, you guessed it. Sim City relied on a connection to the EA servers at all times to be playable, and guess what? They were down again. With the servers down for weeks, from day one might I add, you were unable to save your game, or really do anything for that matter. Much like the problems with Battlefield, EA just has to step up to the plate, and soon, as it seems their reputation is forever dwindling into the abyss.

OK, so Sonic 06 was playable to the point you could play it, but you just wouldn’t. Sonic the Hedgehog is one of the most well known and loved games of all time, so what happened to the 2006 installment that made it enter this wall of shame? Yep, EA. No, I jest, it was poorly thought out, poorly planned and poorly made.

Usually, a designer will have glitches and bugs fixed within the first few weeks, this wasn’t the case here. You will fall through floors, glitch through walls and even the control system is absolutely abysmal. It’s design is just as bad, there are big open spaces with absolutely nothing in them, the game lacks any real direction. It’s upsetting that a classic could be treated in this way, even more so that Sonic could make this list – sorry, old friend.

Unity was hyped for big things, and was then followed up by Ubisoft with an absolutely dire release, one of the worst there has been, probably. Aside from falling through floors, half the time characters faces wouldn’t even render properly. What’s even worse than that is that the game mechanics were simply terrible.

This game’s combat was touted as being more difficult and challenging. Gamers quickly started to see it’s just clunky. If I am attacking, and one of the numerous enemies around me also happens to attack, they’ll connect 9/10 times. It’s difficult to dodge mid attack, combat is slow and reduced to this “poking match” to avoid being hit in the side during an attack on enemies. It’s not “challenging”, it’s just no longer enjoyable. The poor mechanics weren’t even the worst part of Unity sadly.

The servers were. Unity had a massive selling point – it was online, the first Assasins Creed game to be online and boy was that an exciting thought. So, thanks guys for completely ruining that for us. What’s worse is that the game would often generate a poor frame rate on consoles, so Ubisoft suggested simply turning off the internet. Real smart guys – we’ll play online without being connected. Ubisoft made one hell of a blunder with a game that could have been incredible.

Let’s look to the future now though, games are getting better and better, so that’s a real positive. They’re visually stunning and tend to get looked after a lot more before being sent out to the general public which is always a bonus. Until then, we’ll hope the developers get their act together before they lose their devoted followers. Yes, we’re looking at you EA.