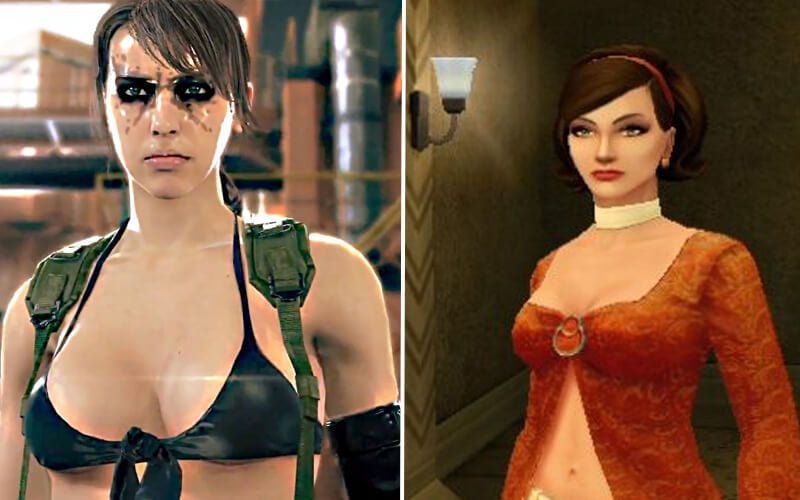 We thought it’d be fun to take a look at some games where women kicked some serious ass.

Male characters are definitely seen more within games, but it’s actually pretty common to see females in ass-kicking rolls these days. In some of these games, most people prefer the female characters.

I know, I bring up The Last of Us a lot.. But always with good reason. Ellie is the 14 year old ass-kicker that literally saves Joel’s life on multiple occasions. Ellie spends a lot of time trying to convince Joel to let her help with the fighting, but you notice that Joel is completely against it to begin with. This is because Joel lost his daughter, who was the same age as Ellie, 20 years prior.

One of the most badass moments in The Last of Us is when Ellie saves Joel from drowning by the hands of another guy. Literally shoots the dude in the face and says “Man… I shot the hell outta that guy, huh?”. Later on in the game, Joel gets impaled right through the abdomen and Ellie is forced to take the lead. She shelters, hunts, and fights for Joel for months, in true ass-kicking fashion.

We’re looking specifically at the first Resident Evil game with this one. Jill is one of two characters you’re allowed to play and she’s definitely the preferred among most. She explores the zombie-infested hallways, rooms, and yards of Spencer Mansion, in hopes to find Bravo Team or some answers.

Jill isn’t your average chick though. Wielding handguns, shotguns, even grenade launchers, she fights her way through a magnitude of different enemies. Rabid zombie dogs, over sized crabs, and a giant cobra are just a few. All the while, she’s chowin’ down on some herbs to keep herself going.

Jill also kicked some major ass in Resident Evil 3. She wandered the streets of Raccoon City, doing ridiculous puzzles, for ridiculous items, that in turn do some ridiculous things. Oh, and she was being chased by a genetically enhanced freak called ‘Nemesis’. Tell me, as a kid, did you ever see that dude in your nightmares? I know I sure did.

3. Cate Archer (No One Lives Forever)

If you’ve been playing games since the 90’s, you must know about Cate Archer. The secret agent who looked equally dashing while kicking some serious bad guy ass or seducing the enemies with her charming looks.

Cate Archer broke the stereotype in games that females can’t be the suave yet deadly agent who can carry an entire game on their shoulders. Not only was the game a hit among the masses, it also received critical acclaim and was adjudged one of the best games of its time.

It resulted in a sequel too and although it wasn’t as good as the original, getting to play Cate again was reason enough for most gamers to try it out. We would definitely not mind a revival of our favorite femme fatal this gen.

Here’s a favorite among most. Lara has been consistently kicking ass for literally 20 years now, across 11 games. From her early polygonal form, to her 2015 elegance, Lara has shown time and time again that you don’t mess with the Tomb Raider.

We don’t need to talk up her badassery much. It’s pretty widely known. But she has another weapon that she uses all the time – her brain. Lara is very crafty in a pinch and has gotten herself in and out of many situations.

The dual wielding renegade refuses capture. Many have tried, all have failed. No one can deny her tenacious ways of dealing with bad guys. It takes a true badass to shoot someone with a flaming arrow from 50 yards away.

Alyx had to grow up in a world controlled by the Combine. That’s a tough life for anyone. Alyx, like Lara, is very smart and used that to her advantage throughout her life. She even used scrap metal to build a 2.5 meter tall ‘Dog’ to protect her. Dog is a sentient robot built with physical power, very intelligent, and has a sixth sense to know where Alyx is at all times.

When you first meet Alyx in Half-Life 2, you’re awoken to hear the sounds of some Combine Soldiers dying. Open your eyes, to none other than Alyx staring back. It’s safe to say she can kick some ass with that scene alone.

Of course, we’d love to see more of Alyx in Half-Life 3. After saving her in HF2: Episode 2, it wouldn’t make any sense not to include her. That is.. assuming Half-Life 3 will ever be released. Please Valve. Please.

Russian Assassin. I really don’t have to say more, but I really, really want to. Quiet is feared among Soviet soldiers because of her incredibly high death count. To be fair, she’s probably the biggest ass-kicker on this list.

Quiet carries around 3 sniper rifles, 2 being lethal named Wicked Butterfly and Sinful Butterfly, while the other being non-lethal named Guilty Butterfly. Now, you know you’re screwed when the person trying to kill you is more worried about which gun to do it with, than actually doing it. Quiet also has a way with words. Here’s a quote:

I did not choose to be Quiet. I wanted to express my feelings to you. If only we shared a common tongue. Vengeance was what drove me to them…The only language left to me, revenge. But the words we shared…No, that was no language at all. That’s why I…I chose the language of gratitude instead, and go back to silence. I am Quiet…I am…the absence of words.

“Wait, Samus is a girl?” is probably one of the most gaming-related memories kids from the 80’s and 90’s have. Back then, it was far less common to see female protagonists in games, especially ones of the ‘ass-kicking’ variety. So while playing Metroid, you’re assuming it’s just another dude.

If you managed to reach the top-tier ending screens by playing through the game well, you were treated to an additional ending screen that shows Samus without the eponymous suit, revealing her to be female. It was refreshing to have a badass character like Samus being portrayed by a girl, so the reveal was welcome.

Samus would go on to champion the archetype of the strong leading lady, similar to Ellen Ripley from the Alien movie franchise. Both characters take no shit, are handy with firearms, wrestle with alien life forms and don’t think twice about getting their hands dirty.

Sometimes, the best ass-kicking isn’t done on the battlefield. Cortana, being the voice in your ear throughout the main series of Halo games, has done her part in saving Master Chief’s ass on multiple occasions.

The biggest being when she literally came to life in Halo 4, to sacrifice herself, in order to get Chief home. Don’t pretend you didn’t shed a tear while playing, we know you did. But it shows that you can be badass on and off the field, sometimes with off the field being more important.

That’s our list of the biggest ass-kicking females in games. There’s a lot we left out, but these seem to shine above the rest in our eyes. From kicking zombie ass, to tearing apart aliens, all the way to the ultimate sacrifice, these ladies can hold their own with any man.