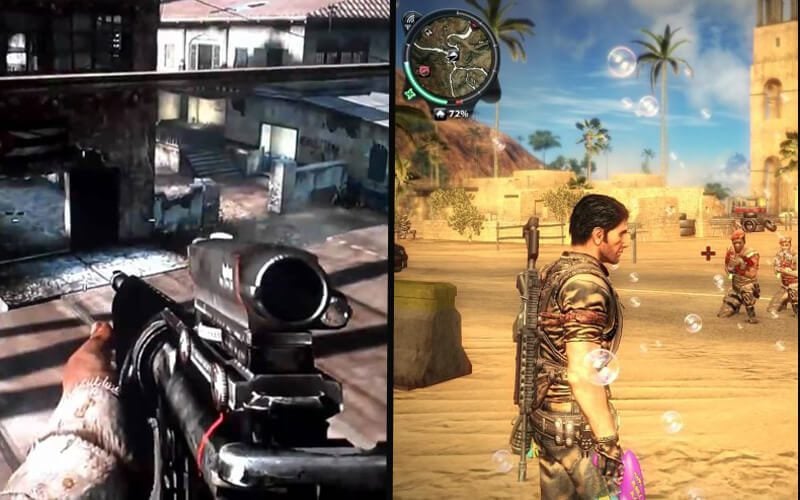 Whatever your cause is, you’ve got to be prepared for some resistance. Suit up with an arsenal of weapons and gadgets to make your life easier, just make sure you leave these behind.

So if you didn’t guess by the name, this is a bubble gun. I don’t think you’ll get far taking down an evil dictator with that, Rico.

Just Cause 2 is packed full of explosions, parachuting and gunfights, it’s pretty much what gaming should be. You’re in the shoes of Rico Rodriguez, professional… I don’t even know what he is, he just blows shit up. Your mission is to take down the evil dictator Baby Panay by causing as much chaos as possible. It’s a questionable method, I know, but in order to cause as much chaos and explosions as possible, you’ll need some big guns.

Full auto assault rifle? Check. Akimbo pistols? Check. Bubble blaster? I think there’s been a mix up somewhere. This gun if hidden away atop a tower, literally in the middle of nowhere so finding it isn’t an easy feat (or you could just google it), and what’s your reward? Does it have some kind of hidden ability? No. It shoots bubbles, what were you thinking?

So you’re locked up inside a mansion full of flesh craving zombies, they’re coming for you and ammo is scarce. Luckily, you have your survival knife to get up close and personal right?

No. For some reason, completely unknown, a shot to the head with a pistol has a chance of instantly dropping one of the undead, but a knife through the skull doesn’t. Sure, I understand that would make the game a hell of a lot easier and the whole reason the RE franchise has made it so far is down to the first game, but come on, where’s the continuity?

It doesn’t help how in every form of zombie media, especially The Walking Dead, knives and other sharp hand to hand weapons (even a screwdriver!) has the capacity to pierce a walkers head and kill the brain with ease, but maybe that’s just me expecting more from a weapon you start the game with.

When Borderland was first announced its main selling point was something on the lines of ‘millions of guns’ and yeah of course, that got me excited. Maybe the guns aren’t all we were promised, well there’s one that stands out above the rest, and not in a good way.

It ultimately comes to a point where every gun you loot is worse than your equipped one and you find yourself just selling the ones you scavenge without testing them or even glimpsing at the stats.

But if one weapon is always on our ‘to sell’ list, it’s transfusion weapons. It all started with TK’s Wave, that stupid shotgun that shot slow, horizontally spread waves (get it?) of crap that hardly ever hit the bag guys, and even if it did it would do little damage and heal you even less.

Just why? Why do these weapons exist? Is there someone who actually uses these weapons who’s above level 5? I’m legitimately intrigued.

A bouncing Betty is a proximity mine, a little bit like a Claymore but more cool. I say cool because back in World at War these were the shit, just place one down in a doorway or on the stairs of the tower in Outskirts and you were safe from an ambush from behind, but put them in future warfare and it doesn’t have the same effect.

Firstly, they’re bigger in BO2, for whatever reason some ‘genius’ thought making them look like giant plates would reduce their visibility. Bouncing Betties from WaW were planted in the ground, making them a lot harder to detect. I thought future technology was all about making things smaller? Secondly, they’re avoidable. Dropping to the ground after hearing the explosive activate will keep you safe from the explosion, again, in WaW you couldn’t avoid them.

The main reason they made this list however, is because in the same game, Claymores were available to use. You can’t avoid a Claymore unless you’re fast enough to double back into cover, or sprint past it, but still that takes quicker reactions that simply holding B and going prone.

If you’re a fan of MGS3 you’ll be familiar with The Fear, he’s one of the many bad guys you fight from the Cobra Unit, except he’s a little different. I don’t really know what he is but he has great agility, poison arrows and a really long tongue. Not sure how effective that is in combat, but whatever, its Metal Gear Solid.

If you manage to take this creep out with just your tranquilizer gun you’ll be awarded the spider camo, the one that The Fear himself used to stay hidden throughout your fight. You equip it and immediately notice you have 80% camouflage in any environment. Great! You think. That is until your energy drops a hell of a lot quicker. You’ll be stuffing your face with Calorie-mate and Russian rations (disgusting!) the whole time you have this equipped just to make sure you don’t starve mid-gunfight.

You’re in an intense battle with a friend and the clock is ticking, thirty seconds left and he’s just taken you out with the hammer. You need to pull it back. Swiftly spawning back in, you see a poke-ball drop from the sky. You rush towards it and smash it on the floor. Whats it going to be?

Magikarp. Your hopes of winning this game have gone as your last chance of winning flops hopelessly on the floor, back and forth, almost like it’s teasing you. ‘Hey look at me I could of been a Snorlax and wiped him out in one but nooooo here I am’. You’ve already accepted your defeat.

Usually in FPS games, all the weapons and equipment are balanced and/or have their own uses for certain situations. Like, for example, a smoke grenade. Throwing one of these into a building full of enemies won’t tip the scales in your favor, unless you’re using a thermal sight. But throw one on an objective and you have yourself some cover.

However the decoy grenade is positively useless. You can think of a few creative uses, like throwing one to draw an enemy out from cover, but it never works in theory. It’s CoD, creative thinking isn’t needed and it most definitely doesn’t work. Where a decoy could be used, so could a flashbang or simply a frag. There’s a tonne of better equipment you could use.

And it’s not even a believable decoy, its just the sound of someone spraying a mag that also comes up on your map. If you’ve ever been killed after investigating a decoy grenade, you should probably be ashamed.

The Giant’s Knife – The Legend of Zelda: Ocarina of Time

The giant’s knife isn’t the only disappointing piece of equipment in Ocarina of Time, there’s the Deku nuts also, which almost made the list.

However, top spot goes to the giant’s knife. You’ve headed to Gorgon City during the story, you’ve destroyed the breakable walls and come across Medigoron’s Forge, he tells you he can make a small knife for 200 rupees, which turns out to be a huge sword for Link which needs two hands to hols.

Besides the inability to block, sounds awesome right? Did he tell you it would break after a few hits? It’s twice as powerful as the master sword, but shockingly fragile. Once it breaks the damage drops to the equal amount of the Kokiri sword, while maintaining the need to hold with two hands, which makes for an awkward moment during battle.

This was our list of 8 pieces of equipment and weapons that will get you killed. Did we miss one that you think should be on here?