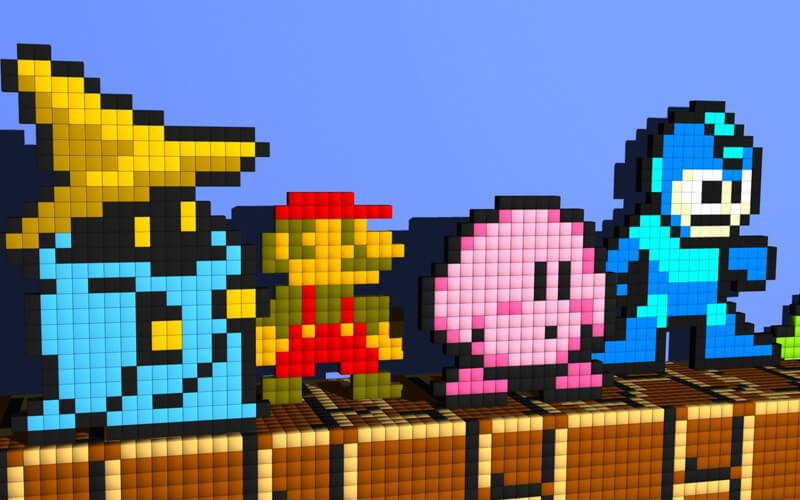 Forget about the terrible graphics (although revolutionary at the time), the dodgy (yet incredibly catchy) music, and the questionable substances that half of the developers must have been taking at the time they came up some of these games, and let us delve into 5 reasons that the classics are still ahead of the game.

1. Gaming used to be about enjoyment

Now, there are people that will declare that some of these retro masterpieces aren’t as enjoyable as some of the newer games, but look to a time even before dial-up internet, remember that? “GET OFF THE INTERNET, I NEED TO USE THE PHONE!”

These games were built around players’ experience, not the need to win, not the need to find pointless hidden crystals which will eventually give you something really stupid that you didn’t need or probably even want for that matter, and this point is made evident, and the popularity of playing for fun can be seen simply by looking at one of the biggest games of recent times which is so simple, so easy to play – Minecraft.

Minecraft gives you a sense of freedom, of fun. No pressure what so ever, just sit back, have a beverage and enjoy. Didn’t you get a similar feeling playing something like Tetris, Bomberman or Pacman? It’s basic, the game is here to make you happy, it’s designed to be enjoyed.

2. Nobody told me about their relations with my mom

OK, this point is more for fun than anything – just like the retro games we love so much. Lets compare two of the biggest first person shooters in history. In the blue corner, weighing in at ‘absolute colossus’ and possibly the biggest gaming franchise next to FIFA (that’s a debate for another day), Call of Duty! And in the red(tro) corner, weighing in at ‘true nostalgia’, representing the Nintendo 64 – 007 Goldeneye!

Let’s not be hasty, nobody is saying CoD is a bad franchise, nor are they saying it isn’t enjoyable; it’s just that CoD and games alike have a lot to live up to. Everybody who games has played and completed Goldeneye – it was revolutionary. Not only was it James Bond, but it was a first person shooter, something we had longed for as console gamers. Today it seems common place in games. The recent release of Battlefront has shown that 3rd person is still alive (although the argument can be made that you can switch up to 1st person), but what do we love about Goldeneye? It isn’t online.

None of these games are. Now, we don’t know about you, but some of us are not fantastic at CoD, that being said, we weren’t great at Goldeneye, but the difference is apparent, if you died on Goldeneye it didn’t matter, you started from the last checkpoint and got on with it. If you die on CoD, in fact, if you make a kill on CoD, you’ll likely get a barrage of abuse from the victim, or the killer.

It doesn’t matter if you win or lose, everybody online wants to flame you and tell you that they have been involved with your Mom somewhere along the line. This is demoralising, perhaps 14 year old Ryan from Derbyshire, England is my biological father, or maybe, he’s just an idiot. Did anybody else get the enjoyment from a first person shooter on a non-competitive format? Perhaps this is what gaming is meant to be now.

3. Everything was much simpler back then

Let us take you back to the 90s, where the clothes were terrible, nobody had any form of muscle definition and our only problem in life was collecting enough Wumpa Fruit to gain a free life on Crash Bandicoot ready for my boss fight against Ripper Roo or Dr. Neo Cortex himself. Gone are the days where a game consisted being an Italian plumber dodging barrels thrown at you by a tie wearing ape, gone are the days where you can collect golden coins as a strangely fast blue hedgehog and gone are the days where the happiest moment of your life was riding around on a Chocobo looking for your next quest.

If you’re looking for a comparison to today’s gaming, you don’t need one. You’ve all played a game from the modern era. Maybe it’s a good thing that there is more of a story line to the modern day games, maybe that’s what keeps people so involved. Having a reason to play, rather than just playing because you really want to. On a personal note, I play a game because I enjoy it, not because I want to hear a story. I grew up playing this way, it’s almost second nature. Playing to have my name on the high scorer’s board, abbreviated to 3 letters of course, is much more interesting than playing to find out which one of the characters dies, which leads us nicely on to the next point.

This one is a big deal. Do we like some of the new age characters? Of course. Will they stick with us like our childhood companions? Probably not. Retro characters are timeless, they were simple, barely any of them spoke and most of them were extremely eye catching or interesting looking. Every character, although some of them make you question the sanity of the designer, were well thought out. It’s more imaginative, it was inspiring. These characters developed gaming into what it is today. Perhaps you disagree, there are some current icons – of course there are, but are they as well known as the legends? In fact, will many or any of them become legends? We’re not talking Master Chief or Pip Boy – who gamers can instantly recognise, we’re talking retro classics.

Ask your parents, ask your grandparents, ask anybody significantly older than you if they know who any of the recent gaming icons are, the chances are they “sort of know” who they are just from you talking about them, or they have no idea. Compare that then to your Sonic the Hedgehog, Super Mario, Crash Bandicoot, Spyro the Dragon, Pacman etc. the list goes on. It’s almost guaranteed they can identify most of them. And that is where retro still rules the roost. You can relate to some of the newer characters which is kind of cool, but they just don’t draw you in as much as the legends did.

5. Classics weren’t made to try and be movies

Can you imagine James Pond: Codename Robocod being at the theatre? Of course you can’t, it would be so stupid, and who would even play him? Not only that, he couldn’t talk, he didn’t need a catchphrase to be incredible, he was just really cool. It didn’t have a particular story line as such, it was just made to be a game – to be played. James Pond isn’t the only game that isn’t made to be, and never was made to be like a movie, in fact, the only real classics that were made like a movie were already movies (check the Mega Drive’s version of Robocop for instance).

Now-a-days it seems like everybody is making a game into a movie, maybe it’s the whole franchising world we live in, who knows? For instance, one of our favourite current games, Hitman, has been turned into an action/love story. Agent 47 doesn’t have feelings. He’s a killing machine, he doesn’t need affection and romance in his life, all he needs is a gun, some fibre wire and an outfit he’s stolen from a victim and he’s ready to go.

It’s not even games that are being turned into movies that’s annoying, well, in a sense it is because they never seem to follow the games themselves, it’s the amount of wasted game time watching cut scenes. Skip them? If you skip them, you have no idea what is going on. If you watch them, you’re still confused only you get to watch a beautifully animated scene for 2 minutes.

PS3’s ‘Heavy Rain’ in itself was a pioneering game. The difference is, that was made to be watched and not played. Perhaps you think this point is a little moany, but as previously stated, we like the simpler times. we like our movies to be movies, and games to be games. We don’t need the next game and Hollywood blockbuster to be part movie, part reach level 22 to unlock the next half. We don’t game for that!

We loved gaming before they were cinematic masterpieces, when they were games. When somebody says the word game, you imagine it to be relaxing and enjoyable, instead it’s grown into something that almost tries to move into the more serious, competitive nature. Is this what you imagined gaming would become when you first booted up your NES?