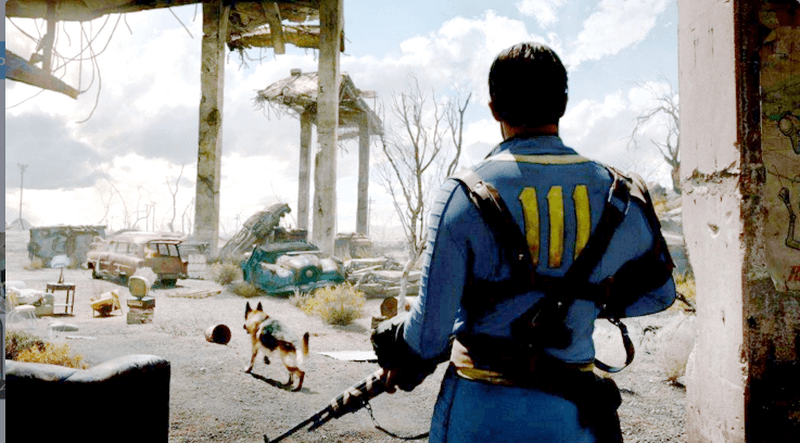 According to Fallout, war never changes, but exactly how much has changed since Bethesda graced us with Fallout: New Vegas?

The beloved RPG has had a little re-configuring for its newest release Fallout 4, but has it been the best choice from Bethesda? We’ll be discussing the contrasts from previous Fallout titles and the effect it has had on the game, the fans and ultimately it’s status of being an ‘RPG’ game.

So by definition, Fallout 4 is an RPG, you fill a role. But we all know that an RPG is much more than that. FO4 follows the trends set by previous entries, but a more watered down, basic variation.

Your choices in previous Fallout games would not just end there. You would suffer repercussions, the world around you and characters would be effected.

Communities would be slaughtered, buildings leveled and it would all be on your head. It’s something we’ve come to love about the Fallout franchise, it’s a true feel that the game is tailored for and revolves around you.

Fallout 4 however lacked this feeling, your choices would be met with a somewhat linear reaction, and even if people died or you jumped over moral boundaries, nobody cared. No matter which ending you chose and who you massacred to do so, your friends and companions just ‘disliked that’.

We were expecting the game to truly punish us for our bad judgments but we were given nothing but a little slap on the wrists.

Lack of the karma system

Once again referencing the freedom we’re accustomed to, it was something we missed during play-throughs of FO4. Especially the karma system.

The karma system is like a reputation meter, measuring you on a scale of how good or bad you’ve been. It’s like Santa’s naughty or nice list. Killing innocent people, stealing and being a douche in general will negatively (or positively, if that’s the way you want to be) effect your karma, resulting in other survivors knowing of your deeds and treating you accordingly.

The lack of the karma system speaks volumes of the game itself, proving that you are forced to be the good guy. Sure you could go and slaughter a few innocents, but with no negative reactions or consequences to face.

You can choose to be greedy, side with the bad guy, squeeze a frail old woman for her last cap and you’ll still end up being the good guy who saved the commonwealth.

Stacking your skill points into the charisma tree is a good way increase your chances of survival and scavenge more caps or supplies from other survivors, but besides from that, it proved less than useful in FO4.

From what I can recall from other Fallout games, dialogue was a pretty big deal. You would be approached with several options (and by several, I mean more than four), each had their own effect on both you and the other person.

If your charisma level was high enough you could persuade or threaten people do to things that wouldn’t happen without that precious charisma skill.

Unfortunately in FO4, we’re given a mediocre four options, one being positive, one negative, one sarcastic and the last being a means to gain further information on the subject at hand, so it’s debatable if that’s even a dialogue ‘option’.

Having a high charisma level will not open more options, it simply replaces your positive response with a color coded (yellow – easy, orange – medium, red – hard) persuasion chance which is mainly used to gain more caps.

Definitely an underwhelming use of a skill that could have been used to open up a world of possibilities.

This is something I can relate to personally, I do enjoy the odd game of Battlefield or CoD. It’s fun in moderation so don’t judge me. I’ve always preferred TES over Fallout, resulting in me putting the hours into Skyrim and completely abandoning FO3 and NV.

I’ve always found Fallout a challenge, a game of surviving while juggling your radiation, ammo and supplies, coupled along with pesky addictions and OP supermutants.

I approached FO4 expecting more of the same, but to my surprise, I blasted through the game with ease. Which is why I believe it makes for a bad RPG and is more of a good action game leaning on the shooter side.

Ammo isn’t necessarily hard to come by and neither are powerful weapons so it doesn’t take long for you to mow down raiders like nobodies business. While I do agree that the combat in previous Fallout games desperately needed upgrading, Bethesda have almost made it too easy, meaning filthy casuals like myself become deathclaw killing machines in Fallout 4.

What makes a great RPG other than quests? It’s our main income of XP, they reward us with weapons, armour and other collectables we wouldn’t acquire otherwise.

Well unfortunately for us, Fallout 4 failed to rope us in with an in-depth storyline, or even memorable quests for that matter. The majority of quests feel like we’re playing the part of Dogmeat and fetching desired items from point A to point B.

Forgetful, linear and somewhat predictable, it almost feels like Bethesda ran out of ideas. Fallout 4 didn’t manage to hold our attention most of the time and more often than not the quests turned out to be boring and forced.

Sure, there are some great ones but Bethesda failed to be consistent and often came across being borderline lazy in executing things when it came to quests.

With all this said, Fallout 4 is a great game and a reliable time killer, we just feel like it has deviated from its roots and what’s made it great, sacrificing some of the greatest features we have encountered in video games for ease of play to satisfy a wider audience.

It seems like Bethesda wanted to make it play more like a solid action game than a seasoned RPG title or maybe somewhere down the line they unintentionally dumbed it down to a point that it resulted in the game becoming one.

Whatever be the reasons, whether intentional or unintentional, the game definitely feels ‘odd’ and RPG fans will sure walk away dissapointed.

What are your opinions on Fallout 4’s RPG status? Has the simplified nature ruined the game or enhanced it? Let us know in the comments section.