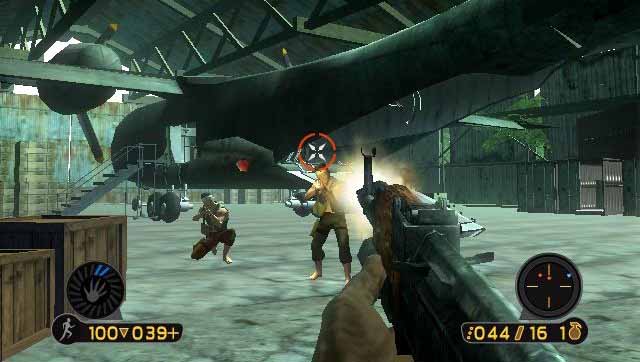 Storyline is important, but much of the enjoyment of a videogame depends on well you are graphically immersed in the story. Even the most captivating concept can be destroyed if the graphics look like poop.

The first game to feature on our list is Rogue Warrior. The game was originally developed by Zombie Studios and was scheduled to be released in 2007. However, publisher Bethesda wasn’t happy with Zombie Studios’ work and scrapped the project.

The whole project was started over again by Rebellion Development and was released in 2009. The game received exceedingly negative reviews upon its release and it is still regarded as one of the worst games ever.

There are no prizes for guessing how poor thegraphics of Rogue Warrior< were. There was a lot of screen tearing and glitches in the game, while animations of the characters were also very stiff. Overall, the graphics of the game were poor as well as the gameplay, and some players even compared its graphics to PlayStation 2 or Xbox games.

Gods and Generals was made based off a movie with the same name directed by Ronald F. Maxwell. The game was developed by Anivision Value and published by Activision. The first-person shooter game, where players were thrown into the battles of the American Civil War, was released in March 2003 for Microsoft Windows PC. The game, which was criticized severely by critics, received a paltry score of 19 out of 100 on Metacritic.

It is no surprise that the graphics of Gods and Generals were Charles Barkley trrble. The game is still regarded as one of the games with the worst graphics ever made. Outdated graphics, along with bad sound and control, terrible AI, and poorly conceived weapons were the main reasons of the game’s downfall.

Far Cry Vengeance is another game to be featured on our list of video games with the worst graphics. The game, which was made exclusively for the Wii console, was the remake of the Xbox title Far Cry Instincts: Evolution.

Far Cry Vengeance, developed by Ubisoft Montreal and published by Ubisoft, was released in 2006/2007. Upon its release, the game was panned with negative reviews.

Unlike Far Cry Instincts: Evolution, Far Cry Vengeance was not well received by the audience and the critics. The former had great graphics, controls, and game play, whereas the latter lacked in all of these.

Far Cry Vengeance was accused of having really poor graphics as its textures were under detailed and the Full Motion Videos (FMV) were compressed. The game didn’t have online play and its other features, such as AI and multiplayer, were also heavily criticized.

The next game to feature in our list is RuneScape. RuneScape is a graphical browser MMORPG which was developed and published by Jagex. The game was released in 2001 for Microsoft Windows, Linux and OS X platforms. RuneScape is featured in the Guinness Book of World records for being the largest free MMORPG with over 200 million accounts.

Although the game is very popular and received positive reviews, we’ll have to point out the fact that the graphics of the game were terrible. Yes, it is a game written in Java, but things could have been much better.

Bubsy 3D is an another game which is considered to be one of the worst games of all time. The platform video game, which was developed by Eidetic and published by Accolade, was released during 1996/1997 for PlayStation. Bubsy 3D is the fourth and final installment and the only 3D game of the Bubsy series.

Bubsy 3D didn’t have a great reception as it was criticized largely upon its release. Various gaming publications like IGN, Gameradar and GameTrailers termed the game as one of the worst games of all times.

Even though game was a 3D installment of the already popular Bubsy series, the graphics were a horror show. The visuals of the game was even compared to ‘painted cardboard boxes’ by many, which sums up the overall graphical quality of the game.

Crackdown 2 is the next game to be included on our list of poopy games. The game, which was a sequel to the 2007 release Crackdown, was released exclusively for Xbox 360 in 2010. The third-person shooter game was developed by Ruffian Games and published by Microsoft Game Studios. Crackdown 2 received both positive and negative reactions upon its release. Its score on Metacritic and GameRankings were 70 and 70.68% respectively.

The original Crackdown was a great game and received critical acclaim. Crackdown 2, however, failed to follow the footsteps of its predecessor. One of the main reasons of Crackdown 2‘s failure was its piss poor graphics.

The game had pathetic graphics, which put the cherry on top of the crap cake of the three year sequel. The comical effect in the game’s graphics was dragged too far and things in the distance looked odd. The character rendering in the game was also very poor.

Superman: The New Adventures, also referred to as Superman 64, was released in 1999 for Nintendo 64. The game based on the famous DC superhero was developed and published by Titus Software. The game was bombarded with negative comments upon its release and is still commonly featured lists of ‘worst games of all time.’ on the internet.

The graphics of Superman 64 were so horrible that looking at it could even give you some sort of disease of the eye. The frame rate of the game was very inconsistent, and frequent clippings were seen in the game’s environment. According to the critics, the game’s visuals had a rushed feeling and the distant fog was excessively used in the game.

The next game to feature in this list is Aquaman: Battle for Atlantis. The game, which was released in 2003 and 2004 for Nintendo GameCube and Xbox, respectively, was developed by Lucky Chicken Games and TDK Mediactive.

The game was based on the DC comics character named Aquaman. Aquaman: Battle for Atlantis was awarded with abysmal score by various reviewers after its release. The game was even referred to as one of the worst games of all time in the video game television show named X-Play.

Aquaman: Battle for Atlantis was heavily criticized by the critics for its really poor graphics. After reviewing the game’s graphics, IGN said:

“Unimpressive. Aquaman looks like one-time-rock star Ted Nugent on a bad hair day and animates through fights like a robot having a seizure. While worlds are large looking, they are also filled with some kind of fogging and also completely void of life; no ground objects or animated backgrounds; no civilians; no craft.”

Do we need to add more to that?

The Postal series, which has include Postal and Postal 2, is known for their really bad graphics. The first game developed by Running with Scissors and published by Ripcord Games and Loki Entertainment was released in 1997.Postal 2 was released five years after its prequel in 2003 and the game was developed by the same developers while being published by Whiptail Interactive and Akella.

When you have a look at Turok, the first thing that will come to your mind is its graphics. For a 2008 release, the graphics could have been a lot better, but somehow it failed to deliver.

The game, which was developed by Propaganda Games and published by Touchstone Pictures and Disney Interactive Studios, was initially released for Xbox 360 and PlayStation 3. The game was later ported to Windows PC.

Turok received mixed reactions upon its release. It received 69 Metacritic score out of 100. Although some aspects of the game were good, the graphics were not at all impressive. There were a lot of graphical glitches in the game and the occasional camera shaking frustrated the players. The textures of the game were also dodgy.

The graphics of Godzilla was worse as the game itself. Being a 2014-15 release, the graphics were downright poor. Had Natsume and Bandai Namco focused more on the graphics, the game could have been a totally different one. Godzilla is such a letdown.

Damnation is developed by Blue Omega Entertainment and is a steampunk shooter. The game was released on May 26, 2009 for last-gen consoles (PS3 and Xbox 360) and PC. The game features an alternate version of Earth, where the American Civil War continued for several decades and the world is almost on the verge of extinction.

The game has your group battling an organization of wealthy and powerful industrialists who want to convert America into a country called the “American Empire,” and wants to implement total dictatorship.

If the plot of the game wasn’t cheesy enough, the graphics are even worse. The animations look dated, the movements are stiff, the particle effects look horrible, and overall the game looks absolutely terrible. It looks like it was made for the PS2 rather than last gen consoles, and the game also received fairly negative reviews which meant the graphics weren’t its only problem.