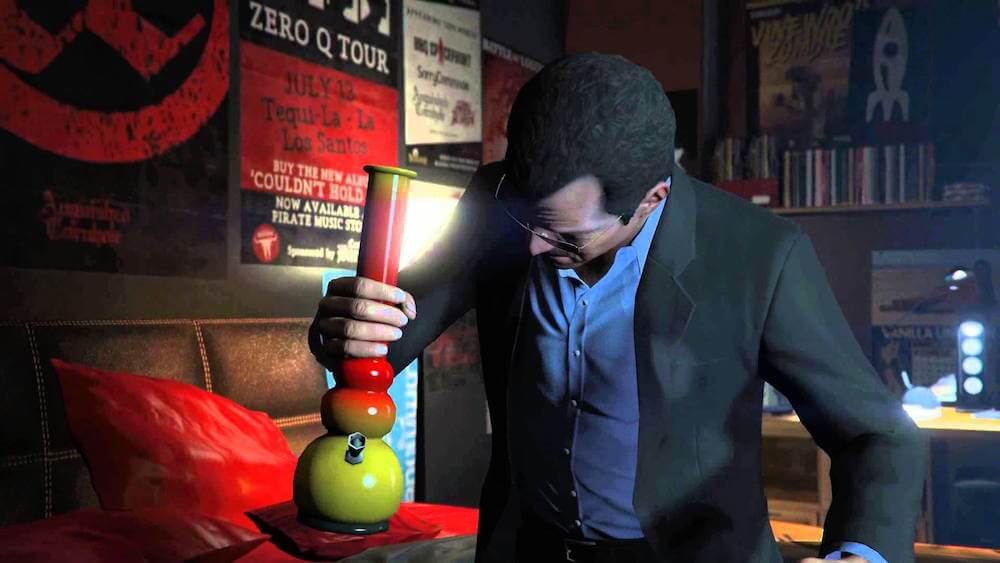 It’s not uncommon for video games to integrate drug use into gameplay. Some drugs are purely fictional, while others share a lot of resemblance to the substances you can find out on the streets. Sometimes players can escape the temptation of bonus stats and increases to abilities, but a lot of times it’s just too easy to completely ignore.

Even if you haven’t played a GTA game, you are probably aware of the drug use that surrounds this popular series. It’s been in every game of the franchise, and it’s up to players if they decide to partake in the use, distribution, or theft of a whole slew of drugs in the game including heroin, cocaine, acid, ecstasy, adrenaline, and weed.

In the BioShock series, you need EVE in order to power up your Plasmids. Even though EVE isn’t your typical run-of-the-mill drug, you still need to inject it into your arm with a needle, and after a while you become dependant on it since using your Plasmids are essential in the game. You’re constantly on the lookout for it, and so is everyone else in Rapture.

Just because a nuclear apocalypse has occurred doesn’t mean it’s the end of the world for narcotics. The Fallout series is no stranger to incorporating drug use into gameplay, more widely known as chems. Some significantly hinder your judgment if you over do it (just ask Mama Murphy), but sometimes getting those additional stat points is worth abusing some Buffout every now and then.

The hero of this story is no stranger to drug use. Steroids are used in the game in order to double a player’s speed, as well as multiply a the Mighty Boot and Quick Kick attacks four times. Unfortunately, you have to ride out the effects of the steroids before resorting to your normal self.

This interactive thriller features Norman Jayden as one of the game’s four playable characters. He’s an FBI profiler assisiting the local police with finding the Origami Killer. However, he has an addiction to triptocaine, tripto for short, due to using his ARI, or Added Reality Interface. Using tripto allows Jayden to focus more on his thoughts and presents an euphoric state of mind, but he has to juggle a dependency on the drug. It’s up to the player on how to handle it.

This dystopian game set in 1960’s Great Britain incorporates drug use in a different way than the previous games on this list. Citizens of Wellington Wells are required to take a drug called Joy, and it makes them happy and keeps them fairly sedated. Joy is used to help people forget about the city’s brutal history. However, anyone that refuses to take the drugs, known as “Downers,” are beat to death in fear of them remembering the past.

This older PC game released in the late 80’s simulated the life of a rock band frontman. In order to increase your creativity stat, you had to take a crap ton of drugs and party, well, like a rock star.

The popular Elder Scrolls games feature an illegal narcotic called Skooma. Players can consume some in order to increase their speed and strength, along with restoring their stamina. However, there are side effects of using too much, so players constantly need to watch how much they consume.

“Skooma is distilled from moon-sugar, which is sacred to we who worship the moon and stars. But those who use skooma for pleasure quickly become slaves to its visions.”

The first game in the franchise focused on Valkyr, an injectable drug that gave its users vivid hallucinations. The substance was originally developed by a secret government program in order to create unstoppable soldiers. However, after its side effects were discovered it quickly became heavily demanded on the streets.

Are you surprised that one of the world’s most iconic and beloved game series is on this list? Well, even though the game doesn’t exactly demonstrate traditional drug use like the other games mentioned in this list, Mario and Luigi still like to chomp down on mushrooms in order to feel invincible. There is still an innocence to this game even with the consumption of mushrooms, but as an adult, it’s very easy to interpret it differently than we did in our childhood.