Traditional home consoles and set-ups today wouldn’t break the bank usually costing around £100-£600, however gaming is a hobby that can attract such large scale investments, for some insane setups.

Every gamer dreams of their ideal gaming setup, whether it be a high end gaming PC or a room full of arcade cabinets. If you’re very passionate about something and have the money, why not splash out on a show piece to make any friend jealous? Be wary though, gaming paraphernalia can easily run into the thousands if you’re not careful, even just a gaming PC with all the peripherals and accessories can cost you £3,000.

When it comes to gaming, collectors will pay a great amount to add the rarest, most vintage games to their collection. ‘Gamma Attack’ is one of the rarest video games of all time, only one cartridge is said to have been made for the Atari 2600, at a value of $20,000-$50,000 it’s a game most collector’s would do anything to get their hands on.

Keep reading to see 10 of the more lucrative high end gaming setups that every gamer would want to own but only a few can even dream of affording leave alone actually purchasing them.

Although this man’s dream basement technically isn’t a gaming setup, I have to mention this $50,000 Skyrim themed basement. The fully furnished basement is also equipped with a $15,000 bathroom, fully stocked alchemy cupboards full of potions, and a giant screen for his games to be projected onto.

Just outside the home console range is a new gaming peripheral hitting the shelves soon. The Omni Virtuix is a virtual reality system that allows you to stand, walk and run in your game world. This peripheral works amazingly with other VR systems like the Oculus Rift. It’s quite expensive coming at a price tag of $699.

This early Star Wars arcade cabinet lets the player pilot an X-Wing from the franchise destroying TIE fighters all while flying through the trenches of the Death Star like scenes from the movie.

This vintage machine may not have the power that other setups in this list have but the fandom behind Star Wars is extensive, making this a solid find.

I mean who wouldn’t want this in their gaming cave?

Everyone in the gaming community has heard of Alienware. Alienware is the poster boy company for any gaming PCs out there. I used their website to build their most expensive high tier desktop PC they have to offer which gave me this, the X51.

The desktop offers a Intel® Core™ i7 Processor, 16GB Memory and a AMD Radeon™ R9 370 with 4GB GDDR5 graphics card.

All of you Bat-fans out there should love to get your hands on this gaming cabinet. The Batman arcade machine is a vehicle-based combat game with around 500 LED lights that light in accordance to the games current state or which boss you happen to be against.

The game can be played solo or multiplayer, if you can afford another $10,000 to get a second cabinet linked, but offers a lengthy game with a great Batman feel.

The custom XDNA Aurum 24K is an extremely impressive 4k gaming PC. The powerful machine can play all 3D games on the market with perfect 4k resolution. With a total core count of 12, it’s 50% more powerful than the Xbox One. It includes two titan graphics card and the computer ran Battlefield 4 at a minimum of 26 frames per second in 4k.

Another custom built PC from the Maingear company with excessively top tier components. This machine will be able to run any triple A game in 4K at a great frame rate. This is the ‘PC master race’s’ idol.

Some of the impressive components it holds includes:

All of this packaged with an impressive 34″ 4K resolution screen makes this the hardest hitting desktop I’ve ever seen.

The second Star Wars machine to make this list is the Star Wars Battle Pod arcade machine. The game lets you control some of the most iconic vehicles from the Star Wars movies viewed on a large curved display.

The Pod has other features such as seat vibration, air bursts and 5.1 surround sound to immerse the player deep in the game.

Ever wanted the closest feeling to driving a formula one car around any track, well now’s your chance. Vesaro’s Racing Simulator has an astonishing 65″ curved screen surrounding the player in a race-like cockpit. The simulator has professional racing pedals, gears and steering wheel all built to a 1:1 scale of an actual sports car.

If the previous simulator wasn’t realistic enough for you then this immersive racing simulator can bridge that gap. Ever wanted a supercar or formula one experience? Well this ingenious simulator costs as much, and maybe more, as a lot of supercars on the market today. The high end machine can replicate Formula One and NASCAR racing to a tee, without any of the danger.

The system’s hydraulic tripod chassis setup is meant to recreate the feeling of how G-force would affect you if you were actually turning a corner in a real high-end race car to near 100% accuracy. Played on a giant curved projection screen on powerful custom PC’s the simulator has near realistic motion blur and it can be customized to the player’s car of choice.

The Zeus Jupiter and the Zeus Mars are extreme examples of cosmetic bravado, the desktop PC’s are not much to boast of themselves but, for example on the Jupiter the platinum casing is scattered with diamonds representing several astrological constellations.

The power behind these gold digger attracting machines is an Intel 3GHz E6850 Core 2 Duo CPU and features 2gb of DDR2 memory and a 1 terabyte hard drive. For three quarters of a million dollars why not get two?

Metal Jesus is a YouTuber who recently showed off his game room with over five-thousand games on forty different platforms. Check out his video below – 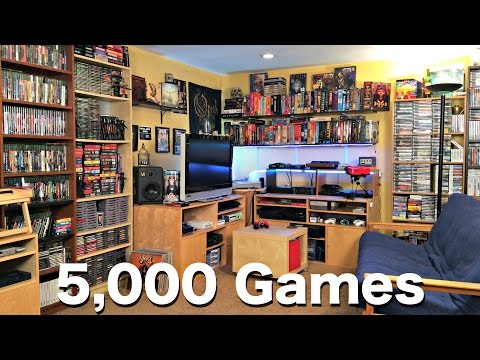