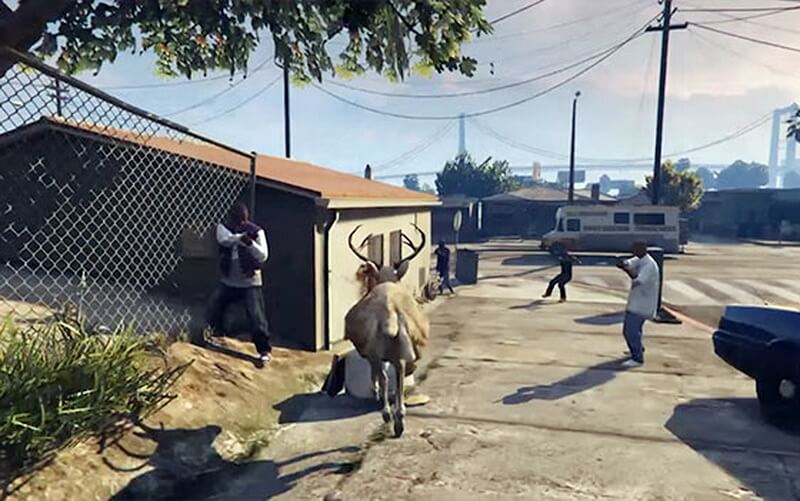 The gameworld of GTA V is full of random events. most of which might pose a direct threat to your life. However, who would have thought that an invincible deer would rank among them?

That’s exactly what’s happening in one version of the game of late. A game artist called Brent Watanabe has programmed a deer to be invincible (and playable) and it wanders around the vast open world of the game.

To add to your woes, not only is the deer invincible but it can also teleport. This has resulted it to appear out of the blue in random events happening in the game. Stuck in a gun battle with a gang? He’s there. Heard of someone invading a military base? That’s him too. Just saw a deer being chased by a group of police? You know the answer.

The deer (if you’ve not guessed it yet) has been put into the game via a mod. The creator Mr.Watanabe has wrecked havoc with him in the game. He’s also twitching his escapades and more than 200000 followers have tuned it to check it out till now.

The most difficult thing during the creation of the project was simply teaching myself to modify GTA V,” Mr Watanabe told the BBC. There is an incredibly active modding community and I figured out how to programme the mod through a lot of forum searches and trial and error.

The deer’s indestructible nature allows it to traverse across the vast open world without ever worrying about getting killed. This means, he can be shot at, attacked by tanks, get run over by a host of different vehicles or have entire building falling on him, and yet merrily hop along eating the choicest of grass.

Mr.Watanabe’s has created such chaos with this deer that at one point it had a 4 star rating on him. Too bad, nothing the cops threw at him could stop him from being the oh-so-destructive force of nature.

The creator reveals his reasons for creating this monster –

I was really drawn to the project because of the slapstick but tragic nature of it,” he said. “And then there is an odd draw to simply keep watching, to see what the deer is going to do next.

This monster has become way more popular than Mr Watanabe ever thought was possible. A lot of people are saying that having this beast that can’t be killed feature in the game has made playing it twice as fun. Others are just enjoying watching him do his usual “I’m Rambo in Deer form” business on Twitch.

Watch him in action below –

P.S – The eating grass bit was a joke. Stop trying to do that.