There is a certain breed gamer out there, and as soon as you tell them that something can’t be done – they’ll take that as a personal challenge to try and prove you wrong. Just ask Todd Howard, the lead dev on Fallout 4.

“I can’t tell you that you can play the whole game without violence – that’s not necessarily a goal of ours,” Howard told The Guardian last summer, while Fallout 4 was still in development.

Well, plenty of Fallout junkies were chomping at the bit to get their chance to prove Todd Howard wrong, and it’s finally happened. Previous games of Fallout were more pacifist-friendly, but Fallout 4 isn’t quite as in-depth when it comes to decisions and consequences, per se.

In other words, Fallout 4 wants to turn you into a murderer, by design, but…

The host of The Weirdist Youtube channel, Kyle Hinckley, had other plans…

Kyle set out to beat Fallout 4 from start to finish without killing anyone. Granted, there are certain plot points (no spoilers) where somebody has do die, but Kyle found clever ways for the game to not attribute those deaths to him.

He told Kotaku that “My first attempt was dismal.” One of the early quests requires the player to kill all of the raiders in a particular area, but Kyle realized that he could just bypass them – he didn’t actually need to kill them.

However, after 75 hours he realized that he backed the wrong faction which resulted in him having to take six lives – which is no good, obviously, when you’re going for a no-kill run, but armed with a few mistakes under his belt and more experience, Kyle was ready to strike out into the Wasteland for what would be his perfect run, and he even recorded it in case there were any doubters.

Strategies involved things like trapping radroaches instead of killing them, so that they couldn’t follow him – and the game still treated it like a kill without Kyle having had to kill them. Or, at other parts in the game, he lead enemies into one another so that they just started duking it out while he escaped quietly, and peacefully, out the back.

How did he level up to get really useful perks, when most of the game’s experience points are earned through combat? Easy, settlements. He built the same structures over and over to grind out levels. This play-through also involved a lot of saving, failing, then re-loading the save.

The Wasteland Whisperer perk allows you to calm certain enemies, but it doesn’t always work, and often takes several tries.

The toughest part was probably when he had to (very minor spoiler ahead) kill Kellogg. There was no way around Kellogg dying, so Kyle lured him into a series of mines, but he had to make sure those mines didn’t kill Kellogg. Then, Kyle brainwashed a series of enemies and had them finish Kellogg off. Sounds easy enough, right? Nope, this fight alone took 5 hours to complete since Kellogg kept healing himself.

You can watch the entire video run on The Weirdist channel, here’s the first part to get you started: 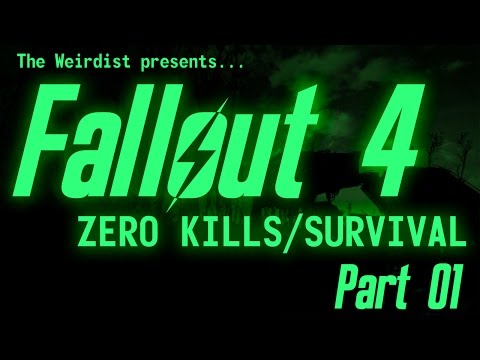 Well done, Kyle. What’ll his next challenge be? We’ll keep you posted.