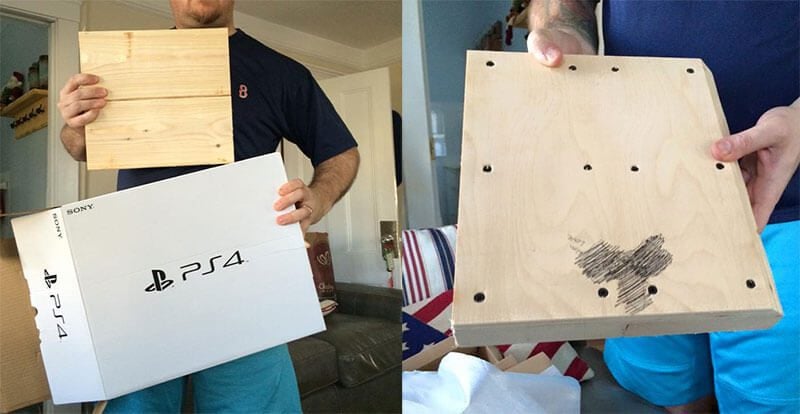 Christmas has just gone and most of us will be enjoying the gifts we received, apart from this kid. One unfortunate lad woke up on Christmas morning and unwrapped what looked like a PS4 box, only to open the packaging and reveal a wooden block that  vaguely resembled the shape of the console.

Oh and there’s a drawing that resembles a phallus, just to rub it in (pun intended).

For reasons unknown, someone replaced the console with the wooden block and scrawled ‘From c*ck and balls, with love’ along with the picture. It could have been anyone ranging from a Target employee to a mischievous customer. Hell, even an Elf gone rogue, we’ll never know!

According to Fox 25, who covered the story, the victim was nine year old Scott Lundy who, prior to the unboxing, stated ‘this is the best Christmas ever’. As you can imagine, his enthusiasm soon died down. His step-mother has this to say.

“He’s crying and he’s upset and he’s in the playroom by himself  and he just wants to be left alone at that point. I was crushed”

However, all wasn’t lost for the family and Scott since the Target store where this atrocity took shape responded in style when the Dad went to file a complaint with them.

The Target store where the item was purchased graciously gave the Lundy family a new (real) console, with a complementary $100 gift card and a copy of the Uncharted Collection.

We never like to disappoint our guests and are thankful for our store team’s quick response to make things right,” said Lee Henderson with Target Communication.

A employee also informed that such incidents aren’t uncommon  and the store’s seen its fair share of them on an occasional basis.

Fair play to Target for their generous offerings in order to make up for this gaffe, but is it too late to restore Scott’s belief in the “Spirit of Christmas” and Santa? Only time will tell…