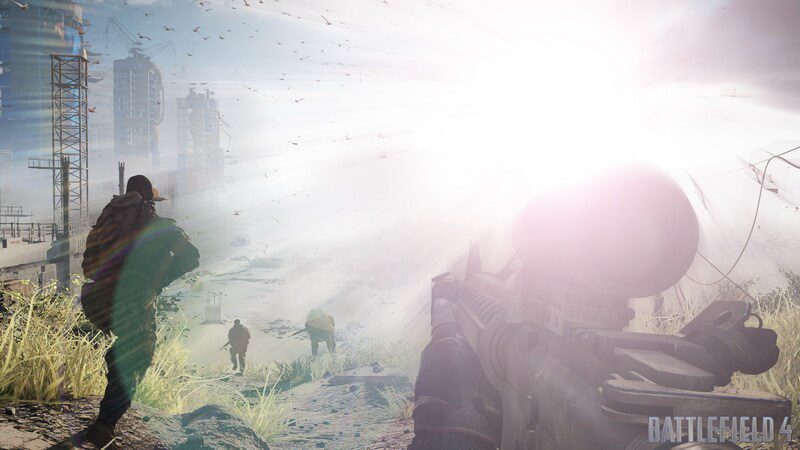 Graphical effects (aka Visual effects) are pretty great, they make games look better, more real, and by extension allow us to get better immersed in those game worlds. Sometimes these effects have an unnoticeable impact on a game, or even a negative impact!

Since game engines are getting more advanced, and these effects more elaborate, let’s call out the main offenders, the Sinister Six of Graphical Effects!

These six effects are annoying at best and nauseating at worst. Now, I’m not saying they should be outlawed but… wait… no, that’s exactly what i’m saying. And who knows, maybe we’ll get lucky (probably not)!  Let’s start mild.

And let’s get one thing out of the way first: it’s not always bad. Depending on the overall aesthetic of a game, Film Grain could actually be a good thing. If that’s not the case, it’s just… annoying, not gamebreaking or anything, just annoying.

Let’s take Ascension from Black Ops Zombies as an example, it has a black-and-white filter until the power is turned on, this is a good thing (or, at least, not a bad thing) because, at worst, it just makes everything black-and-white and is mildly annoying, but, at best, it’s a unique artistic choice and make the game more fun.

Some Game Developers think along these lines because they give players the option to reduce, or completely deactivate Film Grain, but isn’t that in itself an indication that those games never needed it to begin with?

Anyway, since I’m going with this Sinister Six theme, Film Grain would be the Vulture (You know, kinda there but not really a problem).

Which is, really, just a fancy way of saying “broken camera”.

This happens when the lens in a camera is warped, due to old age, and can’t focus light very well. The result is a multicolored blur around objects.

Most people get rid of old, broken, cameras, which makes it that bit more odd than cutting edge games have this effect added in. Like Film Grain it’s annoying, but this time adds absolutely nothing to the game (unless it’s a game about a broken, old, camera).

Most people don’t have glass lenses in their eyes, which means you’re not the protagonist anymore, you’re watching the protagonist (through a broken, old, camera). This takes a bite out of immersion (only if you notice it, which you will since I just drew attention to it. sorry).

Pretty self explanatory, really. Grime, on your character’s eyeballs. Contrary to popular belief, eyeballs don’t gather dust (not while you’re alive, anyway), so why do most modern shooters make it look like they do?

This is worse than annoying, it makes it hard to see, which is rather important in an FPS. It’s also needlessly distracting.

There is an exception, and it’s called the Metro series (aka Russian Fallout), where Eyeball Grime has been transformed to Gasmask Grime, that can be wiped off with the player’s hand. This is not a bad thing, because: 1. Gasmasks, and all such visors, do actually collect dust and grime

Come to think of it, most FPSs involve your character wearing some sort of visor or goggles.  Then again, this effect pops up in 3rd person games, so I guess the above point is moot.

Eyeball Grime will be Mysterio, it confuses me (and Mysterio’s head looks like a big eyeball).

The problem here aren’t the lense flares themselves, but their frequency and intensity.

The problem is, Battlefield 3, that you turned the sun into a massive lense flare and blinded me whenever I dared look in its general direction.

No, they are not caused by anything that isn’t a LENS, and they don’t burn bright with the raging fury of a thousand Suns.

Lens Flares are like Sandman (BECAUSE THEY’RE EVERYWHERE THEY SHOULDN’T BE).

You know, what happens when you’re looking at something far away and everything else goes out of focus.

You wanna know what depth of field isn’t? Walking into a room and everything going blurry except for a mug directly in front of you, that is an indicator that you’re about to go blind.

The annoying thing is Depth of Field becomes noticeable at great distances, not inside a room (unless the protagonist is zoning out during physics class, or something).

And then game developers go even further by making the object you’re looking for the only thing that snaps into focus when you look at it. I have eyes Game Developers, I don’t need your game to do their work for them.

Not to mention that it’s a huge waste. People spent a lot of time making detailed game worlds that just get blurred, but more than that, Depth of Field is an added weight on the system that is replacing other, potentially better aspects of a game.

Depth of Field is Kraven the Hunter, because it’s there just to ruin your day.

(and I’m sure the “field” part fits in somewhere)

The Doctor Octopus of this Sinister Six. To achieve motion blur on the level found in most games today in real life, you’d have to spin your head faster than your neck will allow, seriously, try it right now and see for yourself.

And then it pops up in third person games to confuse even further. Isn’t the whole point of 3rd person that you get a better idea of your surroundings? Guess not. It used to be ok in racing games, because it would only come up when you were going at top speeds, now it’s used at all times!

And then, there’s the motion blur that’s applied to characters, which looks completely ridiculous if they’re not moving at extreme speeds.

The issue is that Motion Blur does occur in real life (and movies), the motion blur in games has to be added in, and is ALWAYS over exaggerated. Motion Blur is added into games to make them feel smooth, but the same can be achieved with high frame rates, which are already present on PCs.

And, let’s face it, even when he was a good guy, Dr. Octopus was a bad guy.

No, they’re not all bad (except motion blur).

I gave examples of how each effect (except motion blur) above can be used to positive effect.

Like all things, the problem is not in the effect themselves, but how they are used.

There is light at the end of this tunnel, bloom and HDR were once as bad, with time developers learned how to use them to maximum effect. Still, it’s good to complain from time to time.

A Fix Is Coming For The Blinding Lens Flares In ‘Call of Duty: Warzone’