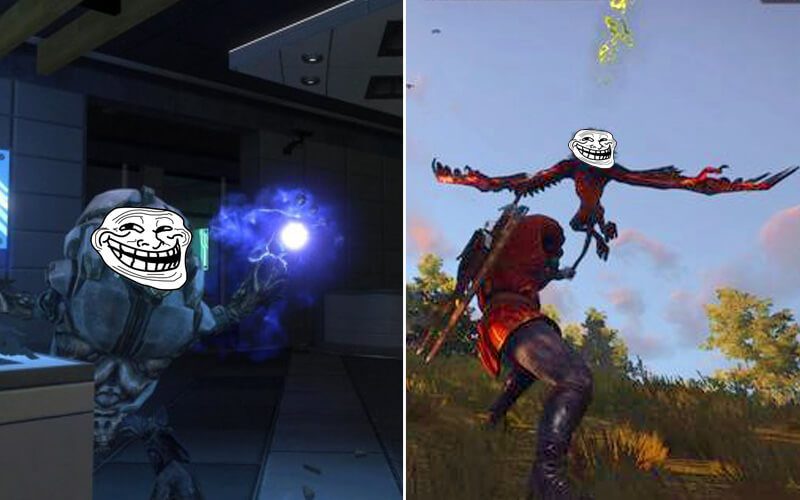 It almost seems like game developers follow trends when designing enemies, we encounter a common type of enemy that’s done the rounds in almost every other video game. We’re not necessarily saying its a bad thing, usually developers will add their own twists to an enemy and make each battle a bit different from another game.

Fighting against invisible enemies just confirms the quote ‘you can’t fight what you can’t see’. Appearing in games such as Halo, StarCraft and The Evil Within, fighting these guys sucks to say the least.

Usually a tactical fight over an aggressive one, the odds are instantly against you and usually have you lying in wait for the perfect moment to strike. The trend seems to be that said enemy is either completely invisible and taking him out requires patience for it to periodically reveal itself (because video games) or that the enemy is camouflaged and with a keen eye it can be spotted.

While facing invisible enemies is never fun, it can make for some great and terrifying fights like the invisible haunted from The Evil Within, where invisible enemies can be tracked by watching for footprints, puddle splashes and items getting knocked over.

Let’s not even go into the n00b who takes active camo and hoards the sniper.

Imagine signing up for your local force or resistance just to be told that you’re one of the guys who’s going to be charging into the bad guys. Usually equipped with explosives, suiciders are a killjoy for all.

The most commonly recognized suiciders are probably the kamikaze grunts from the Halo franchise. With a plasma grenade in each hand, these little devils make a beeline for you, detonating the explosives when you’re in the blast radius. A very bold move for a little guy. What makes the kamikaze grunts such a formidable foe is that they’re small and relatively fast. All it takes is one grunt to take a flank and take you by surprise while you’re cutting down a group of elites.

Of course, they’re also burdened with more weaknesses than strengths. They’re usually easy to kill, commonly open to a one shot kill, they explode upon death and if timed right, the death explosion can take out more enemies. In most scenarios suiciders aren’t a problem, but it’s worth taking the extra caution to avoid becoming mincemeat at the hands of one.

Another enemy type that has cycled around many games, it can come in the form of the Skulls in MGS 5 (sniper class, depending on difficulty) or EVERY enemy in Volgarr The Viking. Defeating these particular foes is usually a test of patience and how long you can keep up the ‘trial and error’ game for.

Admittedly after half a dozen encounters you start to discover tactics and the magic is lost as the scales are tipped in your favor but these can still be a frustrating encounter.

We take a look at some more annoying enemy types –

This could range from Resident Evil to Mortal Kombat, fighting a fast enemy can be one of the most daunting tasks ever.

Most of the time, facing off against a swift bad guy is like catching fireflies, you think you have him where you want, but no, you don’t he’s dodged, again. Their attacks are impossible to avoid unless you have red bull on a drip, my best example would be fighting The Flash on Injustice, or Kabal from MK. A surefire way to throw your controller across the room, fighting a fast guy/girl is a game of opportunity. Strike when it’s best suited, not because you can.

Also, why is it that it’s always the fast guys that are really cocky? Is it just me that’s noticed?

If you can’t fly in a video game, airborne enemies are quite possibly THE most annoying, of all. They usually pose no threat to the player, their attacks are weak and defense just as pitiful.

It’s just the fact they’re usually EVERYWHERE. Sirens from The Witcher 3, Cliff Racers from Elder Scrolls, Lakitu from Super Mario, Birds from Prince of Persia, Eagles from Far Cry 4, please, just go back to your holes. They serve as nothing but a stone in your shoe. Oh you’re climbing a wall? Allow me to just peck at you until you fall. Rushing to complete a quest? Not when we’re swarming behind you. Enjoying a video game? LET ME RUIN THAT.

Fighting them is pointless as it’s usually an instant kill but avoiding them is impossible as they’re faster than you and don’t need to follow a path, breaking line of sight in extremely hard with something that’s in the air.

These were some of our not so favorite annoying video game enemies, have we missed any that made you quit a game, or even stopped you from playing that game altogether? Let us know in the comments section.