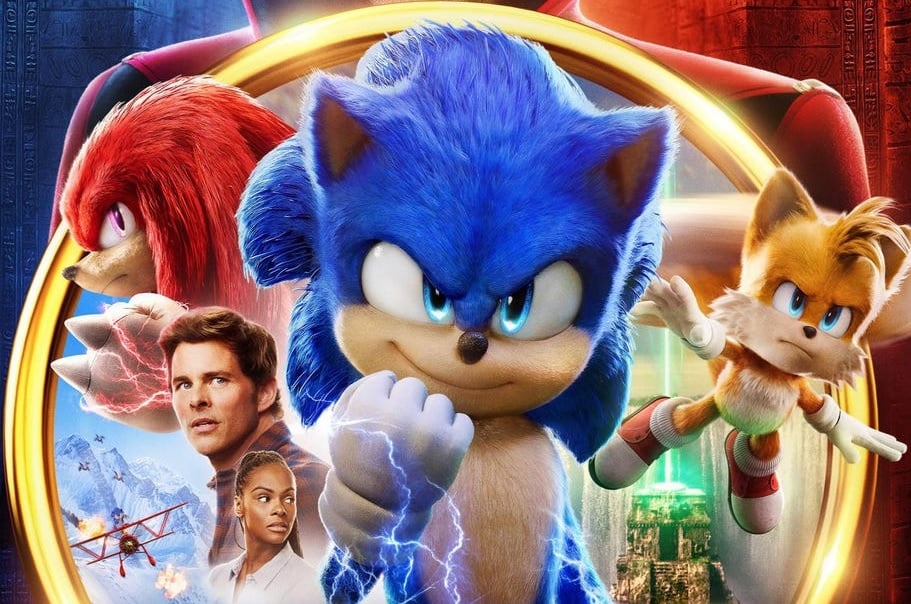 The final Sonic The Hedgehog 2 trailer just dropped and we couldn’t be more excited here at FragHero. So much so, we’re giving our readers a full Sonic the Hedgehog 2 Trailer Breakdown including easter eggs viewers probably didn’t catch. Even the poster is screaming nostalgia at fans, how can this film be bad?

So let’s get down to it, how faithful is Sonic the Hedgehog 2 going to be to the Megadrive classic Sonic 2? Maybe it’s going to have references to multiple Sonic titles? Let’s dig in and find out.

The trailer opens up with a Hawian wedding scene featuring Tom’s sister-in-law Rachel on her special day. From those who remember the first film, Tom isn’t exactly the chosen one when it comes to Rachels’ choice for her sister Maddie. Mid-ceremony, Sonic 1’s Green Hill Zones theme starts ringing from Toms iPhone, with the camera focusing on Sonic’s caller ID screen. This really isn’t helping Toms’s case, although it would have been nice to hear Sonic 2’s Emerald Hill Zone theme instead. Out of the two, we understand that Green Hill Zone is more iconic and easily recognised overall of course.

The next scene flicks to Sonic snowboarding down a mountainside holding knocked out Tails being chased by Robotnik’s drones. It turns out the wedding ring is actually one of Sonic’s teleportation rings, and Tom jumps to the rescue by opening a portal right in front of the whole ceremony. With all wedding attendees buried in a heap of snow, the tone is set for the comedic element of Sonic The Hedgehog 2 with Sonic being thankful for landing in Hawaii.

After the snow settles, Sonic explains to the cast that Robotnik is back. The mad scientist turned supervillain is then shown landing on earth in an egg-shaped pod then embracing the power from the Master Emerald.

It seems that Sonic the Hedgehog 2 will be borrowing lore from other Sonic games, most noticeably Sonic 3 & Knuckles and Sonic Adventure due to the presence of the Master Emerald. In this trailer, the Choas Emeralds are nowhere to be found, which means either they will be introduced towards the end of the film to help fight Knuckles and introduce Super Sonic, or this film is just concentrating on establishing Knuckles into the movieverse.

In Sonic 3 & Knuckles, the Master Emerald resided on Angel Island, with its unfathomable power keeping the sacred land afloat. For those who really want to argue about the Master Emerald in Sonic 2, a beta version of the game saw a large green emerald blocking a pipeline in the Hidden Palace Zone. This turned out to just be a placeholder for a breakable block, but it’s a nice bit of trivia to be aware of.

‘We need to get it back or the world is doomed’ seems to imply that Robotnik already has the Master Emerald from the beginning of the film, which leaves more room for the fallout of these actions to develop and to establish Knuckles into the movie continuity.

The next scene shows a blast of green energy shooting from the ocean resulting in the water mass itself parting to reveal some form of Aztec ruin that has been kept underwater. This is very reminiscent of the Mystic Ruins from Sonic Adventure, it was also the ancient homeland of the Knuckles Clan, a group of ancient Echidna with some serious links to Mya and Aztek mythology. The first Sonic the Hedgehog film showed the audience a vicious group of Echidna hunting down Sonic, perhaps this is all connected and the Echidna clan exist in the present day?

The next scene shows the Silhouette of Knuckles appearing through a wrap ring against a backdrop of giant mushrooms, which is most likely the same planet Robotnik was dumped on at the end of the last Sonic the Hedgehog film. It’s a no brainer that Knuckles is teaming up with Robotnik at this point, especially considering Robotnik and Knuckles briefly teamed up in Sonic 3 and Knuckles. In fact, Knuckles has a bad history of being tricked by Robotnik in the games.

As Knuckles makes his entrance in a coffee shop with Robotnik and his assistant, Knuckles confirms he is an Echidna Warrior. Perhaps he isn’t the guardian of the Master Emerald just yet, but rather an agent of the Echidna clan itself? Robotnik is in full character gear at this point giving multiple nods to the original Robotnik design, bar the massive gut and stick legs of course.

Multiple scenes begin to flood the trailer showing a big tornado, a wardrobe change for Robotnik who is harnessing the power of the Master Emerald on his own to manipulate large objects such as trains to join the whirlwind. Robotnik, lovingly played by Jim Carrey, begins to narrate the scenes stating: “Hedgehog, it’s time to say goodbye to humanity” then stating “Welcome to the new norm”  as chaos ensues. For us, it seems that Robotnik is harnessing the same kind of power Chaos Control utilises, which can be seen being used by Sonic and Shadow in Sonic Adventure 2.

The trailer then goes full circle to the events leading up to the mountain snowboard escape with Sonic and Tails coming across an ice temple of sorts. A giant stone Owl statue guards the entrance and seems to be powered by the same green energy the Master Emerald expels. This discovery is naturally gatecrashed by Robotnik, Knuckles and a gang of drones flying in to ruin Sonic and Tails plans.

As Robotnik fires rockets at the duo, Sonic escapes whilst grabbing a piece of scrap metal to snowboard on. Knuckles catches up, with Sonic stating “Oh great, the Winter Soldier”, yet another great fourth wall breaking pop culture comment.

As a montage of scenes showing Sonic playing superhero, something we all know will be part of the film from the first trailer, Sonic is seen handling a green Emerald. This looks smaller than the Master Emerald, is this confirmation of the Choas Emeralds being collected by Sonic and company? We all know how that ends *Cue Live and Learn*.

we see glimpses of the iconic Death Egg Robot, although it seems to be on Earth and not in space. The good news is this is one of the final bosses in Sonic 2 and a faithful nod to the original Megadrive Sonic games.

First featured in Sky Chase Zone in Sonic 2, the Tornado bi-plane iconic red design is looked after and piloted by tails. It’s also featured in other Sonic games after Sonic 2, with an overhauled design for Sonic Adventure. Seeing the Death Egg Robot and Tornado in one scene in live-action is going to be one of the biggest film events of the year for many hardcore Sonic fans.

The trailer ends with another montage of Sonic and Knuckles trading blows alongside the supporting cast doing their bit to support the blue blur. Robotnik is seen to teleport in whilst using the power of the Master Emerald, another feature of Chaos Control that adds to our theory.

Knuckles can be seen using the same kind of power Sonic uses for his speed, although we can assume Knuckle’s power is used for strength rather than speed. It looks like the ultimate battle sees Sonic and Knuckles fighting in the Mystic Ruins in front of the Master Emerald, maybe Knuckles is trying to return the Master Emerald but is being blackmailed by Robotnik somehow?

The trailer ends with Sonic taunting Knuckles and dodging every punch stating “For a guy named Knuckles, you’re really bad at punching”. Knuckles then lands a massive blow, which may serve as a turning point for Sonic to start taking things seriously.