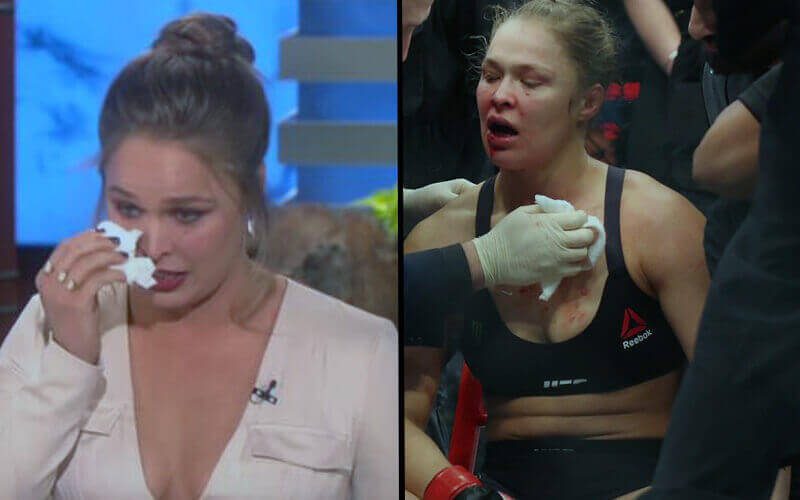 Ronda Rousey isn’t used to losing. She was born and bred as a fierce competitor, with a mother who was the first American to win a gold medal at the World Judo Championships. From a very young age, Ronda Rousey was competing and fighting.

She earned a bronze medal at the Olympics, but when you’re as competitive as Rousey, that’s not gold so it’s a loss. Ronda went into a dark depression after failing to win gold at the Olympics, as detailed in her book “My Fight/Your Fight”.

Her $10,000 prize money ran out quickly, and she got a job bartending at a theme place in Los Angeles.

Rousey began smoking and drinking heavily, often beginning her day with a cigarette and a vodka espresso. She developed a pot-and-Vicodin habit. She’d sleep in her car, and when she did find an apartment, all she could afford was a 12-by-12-foot studio.

Ronda bounced back and better than ever when she discovered MMA and quickly rose to the top of the sport. When the UFC welcomed women’s mma, Ronda armbarred her way to international fame, become one of the highest paid fighters in UFC history, launched a movie career, and become a household name.

The hype train was going full-speed ahead, Joe Rogan went on and on about Ronda’s world-class striking and how she’s a one-in-forever kind of athlete and compared her to Mike Tyson, and most people expected Ronda to roll through another opponent in a matter of seconds.

But Holly Holm had other plans.

The huge underdog Holly Holm demonstrated her actual world-class striking skills and made Ronda Rousey look like an amateur. Holly shocked the world when she finished Ronda with a kick to the head.

It’s customary for the losing fighter in a main event to stick around for a quick interview after the fight, and to attend the press conference. Ronda did neither, instead she went into isolation and avoided any kind of media attention until more recently.

Ronda revealed that she thought about killing herself after her loss to Holly Holm, which is especially dark when you know that her father committed suicide when she was young. This revelation took place on a recent interview with Ellen.

“Honestly … I was sitting in the corner [of the post-fight medical room] and was like, ‘What am I anymore if I’m not this?’ I was literally sitting there thinking about killing myself.” – Ronda Rousey

Ronda is back in the gym and training again in preparation for a fight later this year. Initially, she was going to have an instant rematch with Holly Holm, but Ronda’s taking some time off to heal and work on movies so Holly is going to be defending her belt against another opponent in the meantime.

Holly’s next opponent is Miesha Tate, who just so happens to be Ronda Rousey’s most bitter rival in the sport.