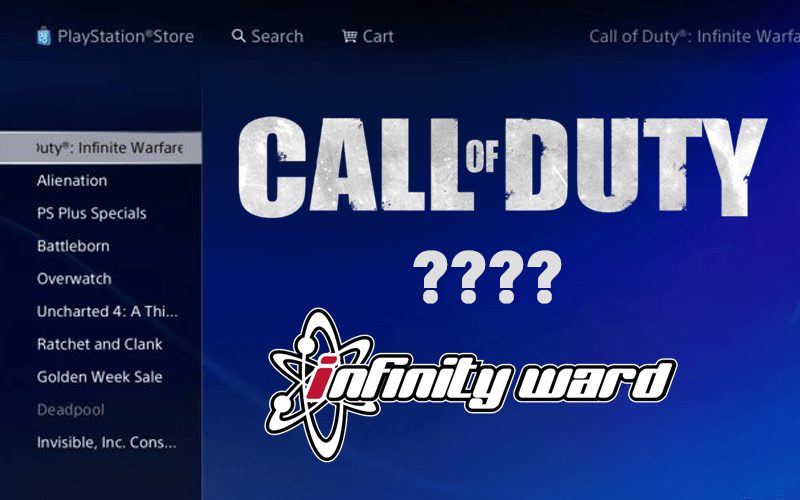 It appears the next Call of Duty is going to be called Call of Duty: Infinite Warfare. This doesn’t come as a big shock however, considering it was heavily thought to take place in the distant future anyway, even including space battles.

Now, this leak is incredibly strong considering it was put on the PlayStation 4 Store around 12PM today, and subsequently taken down around 2PM, as if it wasn’t supposed to be there. There’s of course the chance that it was meant to be there all along to build hype and get people talking about it, in which case, they won. Below is the official image from the PlayStation Store.

The name itself is pretty convincing of an Infinity Ward developed Call of Duty title. Their first three had ‘Warfare’ in the name, coupled with the fact that their studio is literally named Infinity Ward really puts the pieces together nicely.

There’s some theories going around about this title. Maybe it’s going to go the Master Chief Collection route by remaking the three Modern Warfare games into one bundle. It makes sense considering Call of Duty 4 and Modern Warfare 2 are highly regarded as some of the best in the series, and why wouldn’t Activision  want to make some extra money off old games?

Another interesting theory suggests time travel. Now, this one really makes you think. What if they decide to make the game so futuristic, that it involves time travel to go back to World War 2? This is something that a lot of fans would love because it brings you back to Call of Duty’s roots. This theory is so crazy that it honestly makes it completely possible.

Despite how the concept theories, we’re pretty damn sure that CoD 2016 is going by the name Call of Duty: Infinite Warfare. Leave your thoughts on our Facebook page.