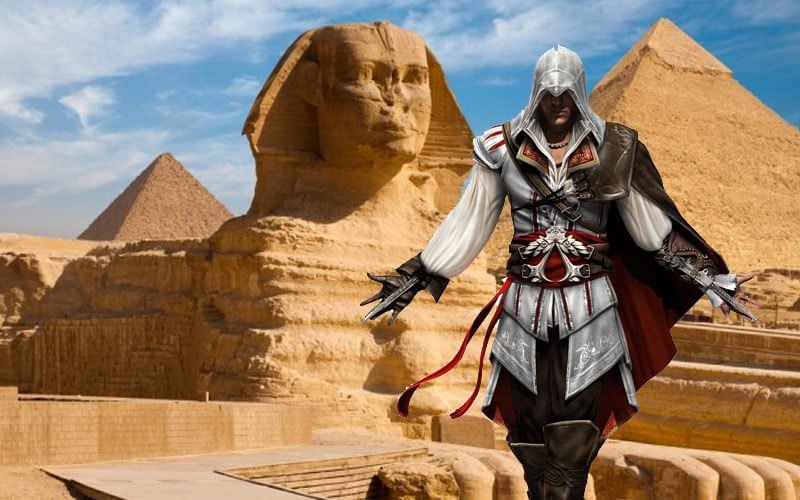 Walk like an Egyptian over to your favorite gaming store in 2017, when the AC prequel is set to drop.

This is still just a rumor, it hasn’t been 100% confirmed yet, but sources are confident that the next installment in the Assassin’s Creed franchise will take place in ancient Egypt and will serve as a prequel to the entire series.

An anonymous dev from Ubisoft posted the following message online:

“Egypt. There won’t be an AC in 2016. You may screencap this and refer to it when nothing is shown in E3 2016. You’ll have to wait until 2017 for it. The reason: It will be a complete revamp of the series. The game is going for a Witcher feel, with player progression, freeform combat system. Horse is back, and boats too. It’s made by the Black Flag team. You may leave any question you want answered.”

But it’s not an official announcement from the company, and we’re unable to verify the poster’s identity, so take it with a grain of salt. It does sound good, doesn’t it? The most effective rumors are the ones that you want to believe.

Assassin’s Creed meets The Witcher 3? Yes please. But again, don’t hold your breath until a more official announcement comes out.

On the plus side, there are other sources, too…

A writer at Kotaku says they’ve been hearing whispers of Assassin’s Creed skipping their 2016 fall game, in favor of an all-out revamp for 2k17. They have spoken to at least three different sources that backup the claims from the anonymous Ubisoft developer.

“There are talks about making a trilogy of this same character, so they might explore Greece/Rome next,” said another anonymous source.

At the end of the day, we’ll wait for the official announcement, but if it’s been a while since you have been excited for an Assassin’s Creed game, it’s okay to start getting excited.

The entire AC universe still has tons of potential and interesting settings to explore, let’s hope they take their time to really nail it this time around.

As always, we’ll keep you posted as soon as we learn more about these rumors and once they’re substantiated. The earlier Assassin’s Creed games were really groundbreaking, but the yearly release schedule can definitely leave gamers feeling like the series has gotten a bit stagnant. Taking a year off and fine-tuning the next release is probabally the best thing that Ubisoft could do to revitalize the franchise and to get gamers more interested again.

There have certainly been some missteps along the way, but overall this is a great franchise and I, for one, am happy to see that it’s getting a little TLC instead of being beaten like a dead horse.