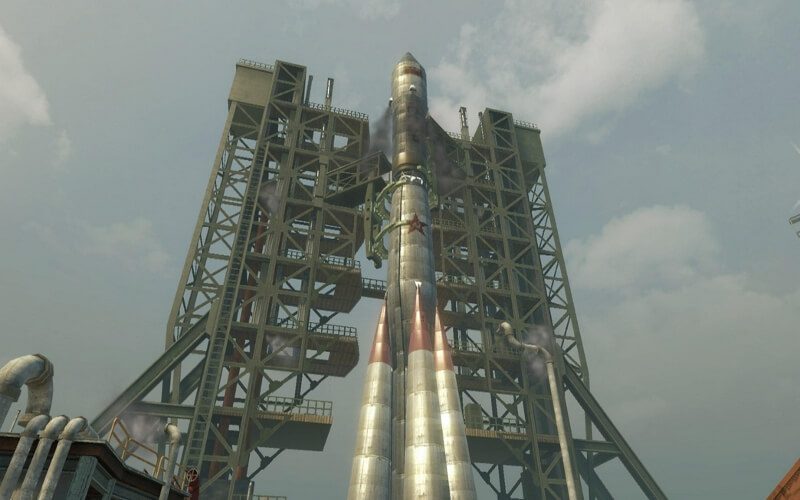 The concepts of first person shooters and multiplayer are now synonymous with each other, and nowhere is this more prominent than when discussing Call of Duty. Since the series shot to ultra-popular status with the release of the original Modern Warfare, multiplayer has been one of the key components in the series continuing success.

Naturally, as with any single player campaign where people have their favourite areas and sections, some multiplayer maps become much more popular than others. Call of Duty has many popular maps, but one map in particular sticks out, and that map is Launch.

Harking back to what some consider the glory days of Call of Duty, Launch was introduced to gamers in Call of Duty: Black Ops. In it, players fight around a huge Russian Soyuz rocket. Along with the usual concerns during competitive play, Launch added a few unique twists into the mix to keep gamers on their toes (so to speak).

One such twist was that during a match, the rocket would actually take-off, killing any players unfortunate enough to be near it at the time. This forced players to have to plan around this during matches, to ensure team members didn’t accidentally get fried.

By looking and listening for clues however, it’s possible to estimate how long the rocket has left until lift off. A voice over a tannoy in the area counts down from ten to one in Russian, and by keeping an eye on the horizon, you might see another rocket shooting into the sky, which meant that your rocket was soon to follow.

This definitely assured Launch had its own unique identity from other maps, but it isn’t what made it truly great. What makes Launch so memorable, and why it’s possibly the best CoD map ever, is its introduction of a multi-tiered level to fight in.

Due to the layout of the area, there were multiple levels and platforms contained within the map that players could climb to. By creating a map where a threat could come from any direction, a whole new level of complexity and strategy was added to the game. An enemy player could just as easily knife you from above as from behind. Snipers became an even bigger problem, as camping in the right spot could effectively make a player a one man army.

It was a whole new challenge, and players loved it. If you look at following titles, you can see just how much influence this level had. Not only did sequels feature many more maps with multi-tiered areas, whole titles were developed with the vertical dimension in mind, such as Advanced Warfare and Black Ops 3. Here, concepts like wall running and jumping are integral to play, developing the concepts introduced in Launch even further.

Launch started a trend that would see itself span the rest of the series. This map and its popularity is the main reason CoD players enjoy the wide variety of level designs and gameplay as they do today, and undoubtedly had an influence upon how other prominent titles designed their multiplayer as well.

For these reasons, Launch could very well be crowned the best Call of Duty map ever.
What do you think?