GTA V’s highly requested Biker DLC launched not too long ago, and hopefully we’ve all been able to sink a few hours in by now – learn the ropes, try it out. If you’ve done that, you’re probably clued up on the general idea of the new content, but even so, there’ll be at least a few things on this list that you’ve missed. Read on for ten of the more discreet features in the new Biker DLC, all worth checking out next time you hop on (thanks, MrBossFTW).

Look on the desk of whichever clubhouse office you happen to be in – there’ll be a newspaper, featuring Johnny Klebitz on the front page. Klebitz is, of course, from the Lost MC. The keenest of fans probably noticed this, if they were perceptive enough; were you?

Another Easter-Egg has led fans to believe a new bike may be surfacing GTA V’s online counterpart around Halloween – the Easter-Egg in question being some sort of skull motorbike. It’d certainly look the part during Halloween, so maybe we will be seeing it around that time.

So, there’s no proper term for this, but I figured the above was a pretty fitting place-holder. Quite simply, players are able to drive in a predetermined formation, with there being two “types” of formation, them being open and lead.

The former doesn’t place players in any particular order; anyone can be anywhere, as such. The latter, on the other hand, ensures that the group’s leader is in the lead. Damn right…

Furthermore, whilst in lead formation, the leader of the group determines which speed at which the other players drive at. This can result in dramatic increases of even the slowest bikes, and similarly, dramatic decreases of the fastest. It all depends on which speed the leader is at.

It serves actually no use whatsoever, and you’ll get bored almost instantly after accomplishing it – but there’s a way to make your character float using some BMX glitch that’s been circulating the community.

In order to do the glitch, simply hop into the air, and hold the left and right triggers down. It won’t work every time, but when it does, well, there you go. It’s not particularly enthralling, but whatever floats your BMX…

Awesome-looking bike sidekicks (and so on)…

I’ve personally always wanted this in GTA V. It just felt upsetting that I couldn’t knock a guy’s head off with a machete, which, admittedly, I still can’t do. Still, I can hit them with it, really hard.

To attack with sidekicks, equip your fists whilst riding a motorcycle – and to use a melee weapon, equip the melee weapon (woah, no shit). The controls are pretty intuitive, but basically, hold down X or Square, and the use the left and right bumpers to kick or swing.

Also, you can still kick in passive mode – but you can only harm NPC’s.

Maybe it’s a glitch, maybe it’s intentional, but now we’re one step closer to causing damage from passive mode. Maybe if we kick a pedestrian into a player and the player’s on extremely low health or…

No? No, probably not.

Yeah, so if you want to avoid property tax payments for the MC businesses, just become a CEO. You’ll not be able to do any of the nifty motorcycle melee/sidekick stuff; but hey, you’ll save money.

In case you were interested, you’re now able to explore The Lost MC Clubhouse within GTA Online, via, of course, an MC mission.

Similarly, the Tequi-La-La Bar is now available during one of the missions, too. Adventure is out there.

For those who actually enjoy Adversary Mode, you’ll be wanting to take a look at Deadline. Those who play Deadline will be able to unlock an exclusive new motorbike, along with some new outfits. Supposedly, it’ll be releasing soon.

Furthermore, there’s a new Halloween Adversary mode coming this year – Angels vs Devils. Check out the video below for more on that, from the man himself.

Just a quick heads up for those who might have missed it – MC missions are accessible via the Heist planning room, and they include exploring new locations, new scenarios, and something fresh in GTA Online.

And that’s it. Hopefully you took something away from it all – and if you’d like to hear anything in more detail, just give the video below a quick watch. 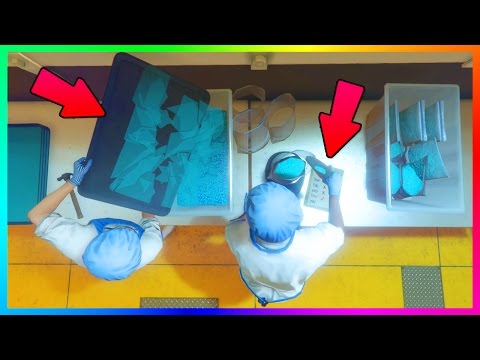