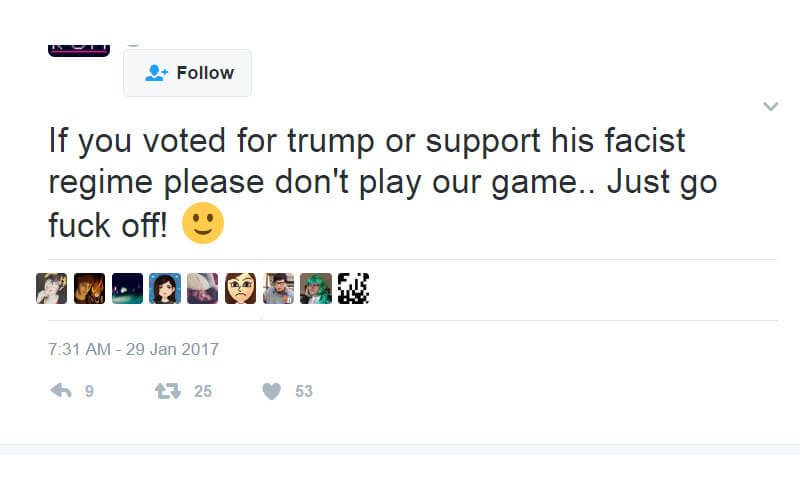 They did ask nicely and say please, at least?

Post-election America feels even more divided than leading up to the election did. Everyone wants to group everyone else into one of two tidy little boxes, as if it’s even possible to divide 300 million people into just two categories.

The only way that seems possible if is you see the world through the lens of “US VS THEM“, and that seems to be what a developer named MidBoss is trying to do. It’s the opposite of being inclusive.

For a lot of people, this election represented a VERY difficult choice.

Instead of all the moderate people coming together to make the country and the world a better place, the extremists on both sides have stolen the microphones and are doing everything they can to spread propaganda, to misinform the general public, and to divide the country as much as possible.

The craziest on both sides are the ones who get the most attention, and that leaves everyone else just feeling exhausted and over it all.

Sometimes, all we can do to get away from the static, the hate, and the division is to pop on our favorite games.

But sometimes, developers would rather alienate half of their audience with hatred of their own.

Midboss is a developer who preach inclusion and peace (which is good) and they tackle themes we don’t always see in games which can be very refreshing – especially for the under-represented groups, but they don’t practise that same peace and inclusion (which is bad).

When someone brought this to their attention after a tweet asking everyone who voted for Trump to not play their games, they… declared war, which seems awfully counter productive.

If you voted for trump or support his facist regime please don't play our game.. Just go fuck off! 🙂

This kind of blatant virtue signalling will earn praise, along with eye-rolls. It’s not going to change anyone’s mind or enlighten them (isn’t that the goal?), it’s just a way to earn brownie points in your own echochamber.

But that’s okay, because they’re not pretending that they even want to make a difference anymore, they’re declaring war against anyone who doesn’t fit into their belief system.

“When they go low, we go lower” seems to be the name of the game, regardless of who you voted for.

To act like everyone who supported Trump is a racist, woman-hating Nazi is to live in a fairytale world. To declare war against them, and to exclude them, is just hypocritical. The hyperbole is getting out of hand, and it’s not productive, it’s just further dividing people.

Having said that: It’s great to have developers out there who are making the types of games they want to play. Huge props for that. Instead of complaining about games not fitting the narratives they’re interested in, they went out and made their own games, and that’s very commendable, and there’s an audience for their games that loves them.

They weren’t seeing the types of games and themes they wanted, so they made their own. The problem is that separating and dividing people isn’t going to change anyone’s mind.

You’re not going to enlighten anyone by insulting them and telling them to fuck off.

There is no argument to be made that developers and everyone else aren’t entitled to their own opinions and politics, everyone is, but there’s a difference between someone like Kojima who masterfully melds it with his games themselves, and a developer having a Twitter meltdown.

Let’s see how gamers have been reacting to this divisive, hateful tweet:

“Seems to be a given with developers of games that preach Diversity in their story for them to hold pretty adversarial attitudes themselves.” – mickeylb

“I played your game for about 30 minutes. I wouldn’t wish that experience on anyone.” – circedge

“I neither voted for him nor supported him. But I find that tweet to be fascist and won’t support the game either” – neo_techni

Diversity, inclusion, and peace… as long as you don’t wear a different color hat than us, right?