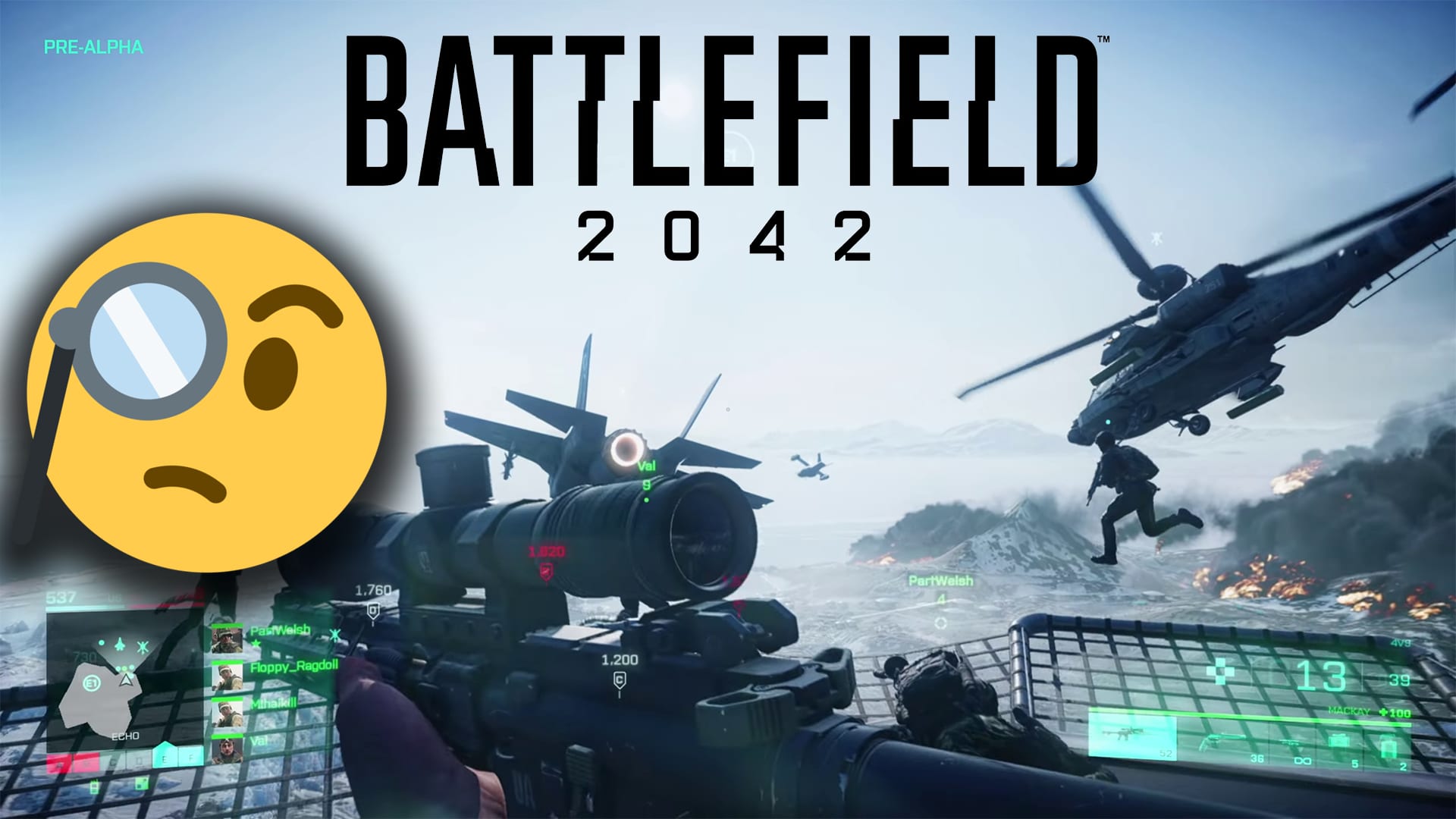 The Battlefield 2042 gameplay trailer was filled with epic moments. So many, in fact, that if you were to blink then you might have missed quite a few.

Thankfully, the trailer was uploaded to YouTube in glorious 4K, perfect for those of us who like to scrub through and pick out the tiniest of details. That’s exactly what we’ve done, and we’ve noticed several small details that would definitely pass you by on a single watch.

Here are five tiny gameplay details that you almost definitely missed in the Battlefield 2042 gameplay trailer.

The maps deform around you

Destruction has always been a staple feature of the Battlefield franchise. Whether it’s levelling entire building complexes or destroying specific walls, Levolution has offered new ways for players to think tactically since Battlefield 4.

Destruction is expected to feature in a big way in Battlefield 2042, even though it wasn’t necessarily highlighted in the gameplay trailer. Still, we did catch a couple of glimpses at how the destructible environments might influence matches in a more macro manner.

As one tank chases another through the sand-strewn streets of Qatar, it’s possible to make out deep tracks made by vehicles as they traverse the dunes. These tracks don’t look baked into the map – they look dynamic.

Beyond a realistic aesthetic, this mechanic could be genuinely useful in gameplay. If players also leave footprints in the sand or snow, it might make tracking elusive enemies a little easier.

Another cool deformation feature can be spotted when a tank drives over a burning vehicle carcass. Look closely, and the caterpillar tracks of the tank are pushed up and deform realistically around the wreck’s model. It’s a small detail, but one that does a lot to simulate the realism that Battlefield has always prided itself with.

I can’t be the only one who still double taps sprint in Black Ops: Cold War, only to be infuriated when I remember that it’s a Warzone exclusive feature. The quick sprint feature in Modern Warzone presented players with an extra movement option, allowing for quick dashes in and out of cover.

It seems as though a similar feature might be arriving in Battlefield 2042. At several spots in the trailer, soldiers can be seen sprinting in traditional Battlefield fashion. Their weapons are held across their chests, swaying from side to side with each step.

There’s a couple of times, however, when soldiers are seen sprinting with their weapons held in a different position. For example, when this squad is seen running for cover in the elevator, the player is holding their weapon pointing towards the ceiling. It happens again as the player is about to launch themselves from the roof of the skyscraper.

It could just be that there are multiple sprinting animations to make gameplay more varied, but it seems plausible that DICE would take some notes from a more popular feature of the modern Call of Duties.

We’ve already been introduced to four of the 10 launch Specialists. In fact, we see several gameplay clips of Maria Falck, the medic character who can revive teammates from a distance.

If you look closely, you can spot a couple of other characters who might be upcoming Specialists. One character can be seen hiding behind some deployable cover, while another is advancing along a corridor behind a riot shield.

These two gadgets could be universal for all players to equip. However, the chunky nature of both deployable cover and riot shields makes me think that they might be specific to certain Specialists.

We can even catch a glimpse of their name, too. The title ‘Sundance’ appears just below the health bar on the UI, right where Maria Falck’s surname is listed in several other shots of the trailer.

We got the idea that these new Battlefield maps would be pretty big, but I don’t think we were quite prepared for just how big. In a few shots, we catch a glimpse of Breakaway, the map set in Antarctica. This will be the biggest map in Battlefield 2042, and will consequently be the largest ever seen in the series before now.

If you pause on one clip as the soldier looks across the map from a vantage point, you can see that objective B is listed as 1.8km away from objective E. Considering that there is also an objective F and A which are presumably even farther apart, that’s some serious distance to cover in one map.

The largest Battlefield map prior to Breakaway was Bandar Desert, as seen in the Armoured Kill DLC for Battlefield 3. That DLC mostly focused on vehicle gameplay. As such, much of the massive 5km2 playspace was empty desert.

For comparison, Breakaway is expected to be around 5.9km2 in size. That’s almost twice as large as the original map in Fortnite Season 1. You’ll definitely want some form of transport vehicle to cover such vast distances in Battlefield 2042.

Due to the frankly insane map sizes in Battlefield 2042, the way that Conquest captures points work have changed slightly. Instead of being one singular capture points, they’re now split up into sections.

If you look at the HUD in the top centre of the screen, you can see that capture points are listed as “E1” or “E2”. These indicate which section you’re currently standing in. Teams will have to capture all of the sections to fully capture the objective point for themselves.

Another small quality of life change is that you can now see exactly how many friendly and enemy players are situated in the objective zone. This wasn’t so much of an issue in previous titles. The 64 player count and tame map sizes meant you never spent too long searching for lingering opponents.

With huge playspaces and 128 people on the battlefield, DICE clearly felt that players should probably be told if they’re sharing the objective space with someone else. It should certainly make for a less frustrating experience when you just can’t find that one player camping in a damp corner.

Those are just a few small details that we noticed from rewatching the Battlefield 2042 gameplay trailer. For a deep dive into the gameplay mechanics of Battlefield 2042, give our extensive guide a read. It turns out that the reveal trailer held more details than first met the eye…

Did you spot anything that we didn’t? Let us know across our social channels.